We’ve already discussed the many benefits of participating in class as a form of actively engaging in learning. Not everyone naturally feels comfortable participating. Following some general guidelines makes it easier.

Guidelines for Participating in Classes

A concern or fear about speaking in public is one of the most common fears. If you feel afraid to speak out in class, take comfort from the fact that many others do as well—and that anyone can learn how to speak in class without much difficulty. Class participation is actually an impromptu, informal type of public speaking, and the same principles will get you through both: preparing and communicating. 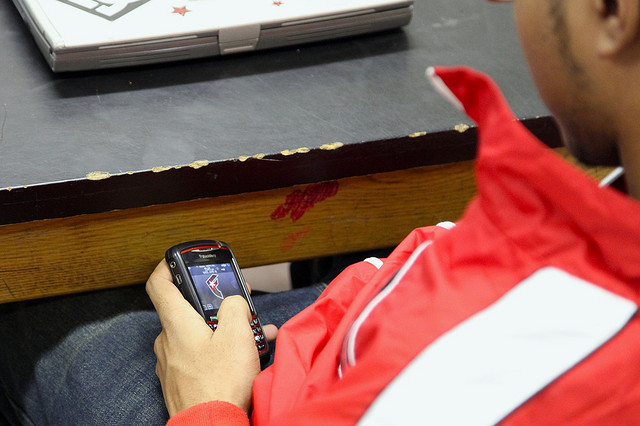 Don’t use your cell phone during class time.

While opportunities are fewer for student discussions in large lecture classes, participation is still important. The instructor almost always provides an opportunity to ask questions. Because time is limited, be ready with your question or comment when the opportunity arises—and don’t be shy about raising your hand first.

Being prepared is especially important in lecture classes. Have assigned readings done before class and review your notes. If you have a genuine question about something in the reading, ask about it. Jot down the question in your notes and be ready to ask if the lecture doesn’t clear it up for you.

Being prepared before asking a question also includes listening carefully to the lecture. You don’t want to ask a question whose answer was already given by the instructor in the lecture. Take a moment to organize your thoughts and choose your words carefully. Be as specific as you can. Don’t say something like, “I don’t understand the big deal about whether the earth revolves around the sun or the sun around the earth. So what?” Instead, you might ask, “When they discovered that the earth revolves around the sun, was that such a disturbing idea because people were upset to realize that maybe they weren’t the center of the universe?” The first question suggests you haven’t thought much about the topic, while the second shows that you are beginning to grasp the issue and want to understand it more fully.

Following are some additional guidelines for asking good questions:

A note on technology in the lecture hall. Colleges are increasingly incorporating new technology in lecture halls. For example, each student in the lecture hall may have an electronic “clicker” with which the instructor can gain instant feedback on questions in class. Or the classroom may have wireless Internet and students are encouraged to use their laptops to communicate with the instructor in “real time” during the lecture. In these cases, the most important thing is to take it seriously, even if you have anonymity. Most students appreciate the ability to give feedback and ask questions through such technology, but some abuse their anonymity by sending irrelevant, disruptive, or insulting messages.

When the instructor’s teaching style matches your learning style, you are usually more attentive in class and may seem to learn better. But what happens if your instructor has a style very different from your own? Let’s say, for example, that your instructor primarily lectures, speaks rapidly, and seldom uses visuals. This instructor also talks mostly on the level of large abstract ideas and almost never gives examples. Let’s say that you, in contrast, are more a visual learner, that you learn more effectively with visual aids and visualizing concrete examples of ideas. Therefore, perhaps you are having some difficulty paying attention in class and following the lectures. What can you do?

Finally, take heart that a mismatch between a student’s learning style and an instructor’s teaching style is not correlated with lower grades.