The elucidation of the structure of the double helix provided a hint as to how DNA divides and makes copies of itself. In their 1953 paper, Watson and Crick penned an incredible understatement: “It has not escaped our notice that the specific pairing we have postulated immediately suggests a possible copying mechanism for the genetic material.” With specific base pairs, the sequence of one DNA strand can be predicted from its complement. The double-helix model suggests that the two strands of the double helix separate during replication, and each strand serves as a template from which the new complementary strand is copied. What was not clear was how the replication took place. There were three models suggested ((Figure)): conservative, semi-conservative, and dispersive. 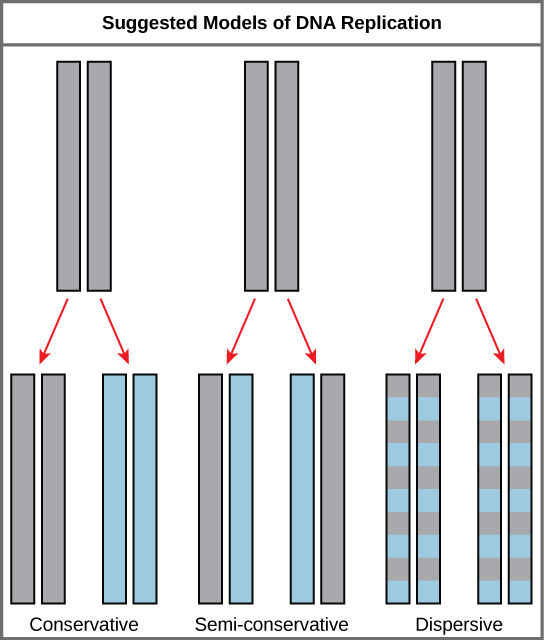 In conservative replication, the parental DNA remains together, and the newly formed daughter strands are together. The semi-conservative method suggests that each of the two parental DNA strands acts as a template for new DNA to be synthesized; after replication, each double-stranded DNA includes one parental or “old” strand and one “new” strand. In the dispersive model, both copies of DNA have double-stranded segments of parental DNA and newly synthesized DNA interspersed.

Meselson and Stahl were interested in understanding how DNA replicates. They grew E. coli for several generations in a medium containing a “heavy” isotope of nitrogen (15N), which gets incorporated into nitrogenous bases, and eventually into the DNA ((Figure)).

Meselson and Stahl experimented with E. coli grown first in heavy nitrogen (15N) then in 14N. DNA grown in 15N (red band) is heavier than DNA grown in 14N (orange band), and sediments to a lower level in cesium chloride solution in an ultracentrifuge. When DNA grown in 15N is switched to media containing 14N, after one round of cell division the DNA sediments halfway between the 15N and 14N levels, indicating that it now contains fifty percent 14N. In subsequent cell divisions, an increasing amount of DNA contains 14N only. These data support the semi-conservative replication model. (credit: modification of work by Mariana Ruiz Villareal) 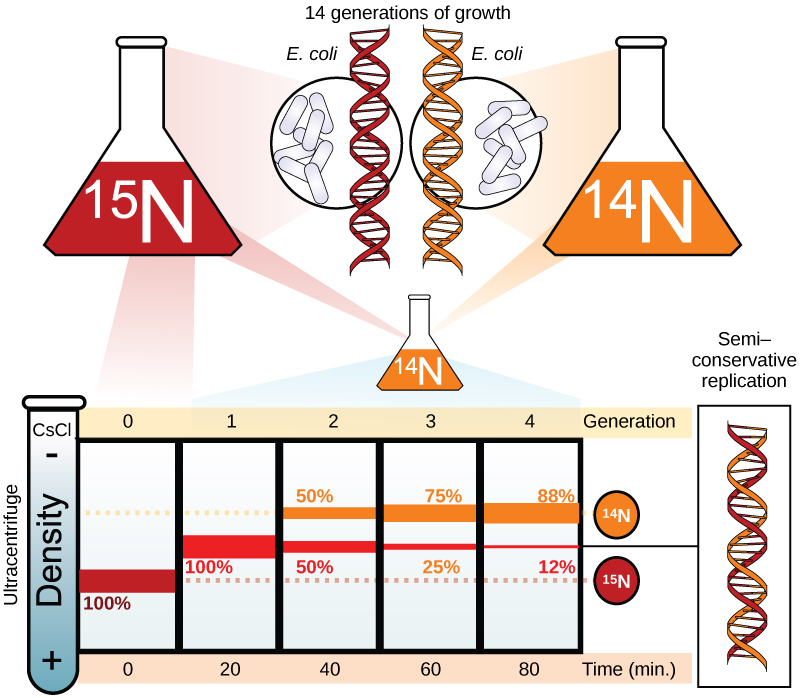 The E. coli culture was then placed into medium containing 14N and allowed to grow for several generations. After each of the first few generations, the cells were harvested and the DNA was isolated, then centrifuged at high speeds in an ultracentrifuge. During the centrifugation, the DNA was loaded into a gradient (typically a solution of salt such as cesium chloride or sucrose) and spun at high speeds of 50,000 to 60,000 rpm. Under these circumstances, the DNA will form a band according to its buoyant density: the density within the gradient at which it floats. DNA grown in 15N will form a band at a higher density position (i.e., farther down the centrifuge tube) than that grown in 14N. Meselson and Stahl noted that after one generation of growth in 14N after they had been shifted from 15N, the single band observed was intermediate in position in between DNA of cells grown exclusively in 15N and 14N. This suggested either a semi-conservative or dispersive mode of replication. The DNA harvested from cells grown for two generations in 14N formed two bands: one DNA band was at the intermediate position between 15N and 14N, and the other corresponded to the band of 14N DNA. These results could only be explained if DNA replicates in a semi-conservative manner. And for this reason, therefore, the other two models were ruled out.

During DNA replication, each of the two strands that make up the double helix serves as a template from which new strands are copied. The new strands will be complementary to the parental or “old” strands. When two daughter DNA copies are formed, they have the same sequence and are divided equally into the two daughter cells.

During cell division, each daughter cell receives a copy of each molecule of DNA by a process known as DNA replication. The single chromosome of a prokaryote or each chromosome of a eukaryote consists of a single continuous double helix. The model for DNA replication suggests that the two strands of the double helix separate during replication, and each strand serves as a template from which the new complementary strand is copied. In the conservative model of replication, the parental DNA is conserved, and the daughter DNA is newly synthesized. The semi-conservative model suggests that each of the two parental DNA strands acts as template for new DNA to be synthesized; after replication, each double-stranded DNA retains the parental or “old” strand and one “new” strand. The dispersive model suggested that the two copies of the DNA would have segments of parental DNA and newly synthesized DNA. The Meselson and Stahl experiment supported the semi-conservative model of replication, in which an entire replicated chromosome consists of one parental strand and one newly synthesized strand of DNA.