Long before scientists visualized chromosomes under a microscope, the father of modern genetics, Gregor Mendel, began studying heredity in 1843. With improved microscopic techniques during the late 1800s, cell biologists could stain and visualize subcellular structures with dyes and observe their actions during cell division and meiosis. With each mitotic division, chromosomes replicated, condensed from an amorphous (no constant shape) nuclear mass into distinct X-shaped bodies (pairs of identical sister chromatids), and migrated to separate cellular poles.

The speculation that chromosomes might be the key to understanding heredity led several scientists to examine Mendel’s publications and reevaluate his model in terms of chromosome behavior during mitosis and meiosis. In 1902, Theodor Boveri observed that proper sea urchin embryonic development does not occur unless chromosomes are present. That same year, Walter Sutton observed chromosome separation into daughter cells during meiosis ((Figure)). Together, these observations led to the Chromosomal Theory of Inheritance, which identified chromosomes as the genetic material responsible for Mendelian inheritance.

(a) Walter Sutton and (b) Theodor Boveri developed the Chromosomal Theory of Inheritance, which states that chromosomes carry the unit of heredity (genes). 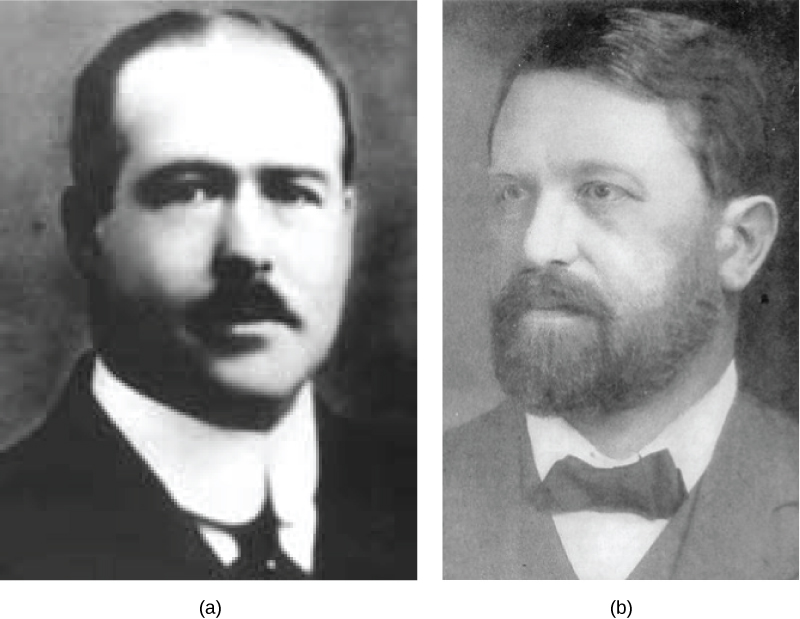 The Chromosomal Theory of Inheritance was consistent with Mendel’s laws, which the following observations supported:

Despite compelling correlations between chromosome behavior during meiosis and Mendel’s abstract laws, scientists proposed the Chromosomal Theory of Inheritance long before there was any direct evidence that chromosomes carried traits. Critics pointed out that individuals had far more independently segregating traits than they had chromosomes. It was only after several years of carrying out crosses with the fruit fly, Drosophila melanogaster, that Thomas Hunt Morgan provided experimental evidence to support the Chromosomal Theory of Inheritance.

Mendel’s work suggested that traits are inherited independently of each other. Morgan identified a 1:1 correspondence between a segregating trait and the X chromosome, suggesting that random chromosome segregation was the physical basis of Mendel’s model. This also demonstrated that linked genes disrupt Mendel’s predicted outcomes. That each chromosome can carry many linked genes explains how individuals can have many more traits than they have chromosomes. However, researchers in Morgan’s laboratory suggested that alleles positioned on the same chromosome were not always inherited together. During meiosis, linked genes somehow became unlinked.

In 1909, Frans Janssen observed chiasmata—the point at which chromatids are in contact with each other and may exchange segments—prior to the first meiosis division. He suggested that alleles become unlinked and chromosomes physically exchange segments. As chromosomes condensed and paired with their homologs, they appeared to interact at distinct points. Janssen suggested that these points corresponded to regions in which chromosome segments exchanged. We now know that the pairing and interaction between homologous chromosomes, or synapsis, does more than simply organize the homologs for migration to separate daughter cells. When synapsed, homologous chromosomes undergo reciprocal physical exchanges at their arms in homologous recombination, or more simply, “crossing over.”

To better understand the type of experimental results that researchers were obtaining at this time, consider a heterozygous individual that inherited dominant maternal alleles for two genes on the same chromosome (such as AB) and two recessive paternal alleles for those same genes (such as ab). If the genes are linked, one would expect this individual to produce gametes that are either AB or ab with a 1:1 ratio. If the genes are unlinked, the individual should produce AB, Ab, aB, and ab gametes with equal frequencies, according to the Mendelian concept of independent assortment. Because they correspond to new allele combinations, the genotypes Ab and aB are nonparental types that result from homologous recombination during meiosis. Parental types are progeny that exhibit the same allelic combination as their parents. Morgan and his colleagues, however, found that when they test crossed such heterozygous individuals to a homozygous recessive parent (AaBb × aabb), both parental and nonparental cases occurred. For example, 950 offspring might be recovered that were either AaBb or aabb, but 50 offspring would also result that were either Aabb or aaBb. These results suggested that linkage occurred most often, but a significant minority of offspring were the products of recombination.

This figure shows unlinked and linked gene inheritance patterns. In (a), two genes are located on different chromosomes so independent assortment occurs during meiosis. The offspring have an equal chance of being the parental type (inheriting the same combination of traits as the parents) or a nonparental type (inheriting a different combination of traits than the parents). In (b), two genes are very close together on the same chromosome so that no crossing over occurs between them. Therefore, the genes are always inherited together and all the offspring are the parental type. In (c), two genes are far apart on the chromosome such that crossing over occurs during every meiotic event. The recombination frequency will be the same as if the genes were on separate chromosomes. (d) The actual recombination frequency of fruit fly wing length and body color that Thomas Morgan observed in 1912 was 17 percent. A crossover frequency between 0 percent and 50 percent indicates that the genes are on the same chromosome and crossover sometimes occurs. 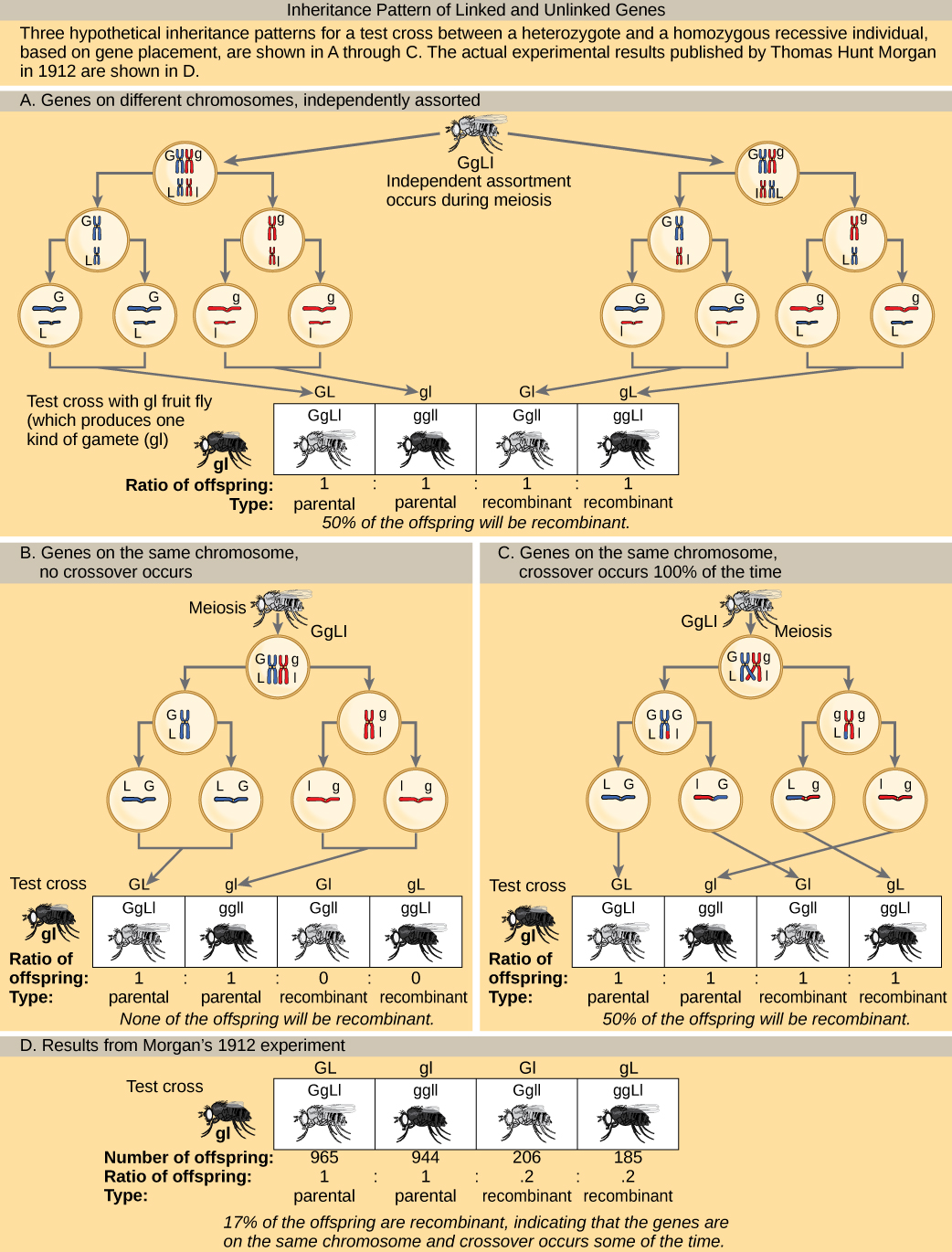 In a test cross for two characteristics such as the one here, can the recombinant offspring’s predicted frequency be 60 percent? Why or why not?

Janssen did not have the technology to demonstrate crossing over so it remained an abstract idea that scientists did not widely believe. Scientists thought chiasmata were a variation on synapsis and could not understand how chromosomes could break and rejoin. Yet, the data were clear that linkage did not always occur. Ultimately, it took a young undergraduate student and an “all-nighter” to mathematically elucidate the linkage and recombination problem.

In 1913, Alfred Sturtevant, a student in Morgan’s laboratory, gathered results from researchers in the laboratory, and took them home one night to mull them over. By the next morning, he had created the first “chromosome map,” a linear representation of gene order and relative distance on a chromosome ((Figure)).

This genetic map orders Drosophila genes on the basis of recombination frequency.

Which of the following statements is true?

As (Figure) shows, by using recombination frequency to predict genetic distance, we can infer the relative gene order on chromosome 2. The values represent map distances in centimorgans (cM), which correspond to recombination frequencies (in percent). Therefore, the genes for body color and wing size were 65.5 − 48.5 = 17 cM apart, indicating that the maternal and paternal alleles for these genes recombine in 17 percent of offspring, on average.

To construct a chromosome map, Sturtevant assumed that genes were ordered serially on threadlike chromosomes. He also assumed that the incidence of recombination between two homologous chromosomes could occur with equal likelihood anywhere along the chromosome’s length. Operating under these assumptions, Sturtevant postulated that alleles that were far apart on a chromosome were more likely to dissociate during meiosis simply because there was a larger region over which recombination could occur. Conversely, alleles that were close to each other on the chromosome were likely to be inherited together. The average number of crossovers between two alleles—that is, their recombination frequency—correlated with their genetic distance from each other, relative to the locations of other genes on that chromosome. Considering the example cross between AaBb and aabb above, we could calculate the recombination’s frequency as 50/1000 = 0.05. That is, the likelihood of a crossover between genes A/a and B/b was 0.05, or 5 percent. Such a result would indicate that the genes were definitively linked, but that they were far enough apart for crossovers to occasionally occur. Sturtevant divided his genetic map into map units, or centimorgans (cM), in which a 0,01 recombination frequency corresponds to 1 cM.

By representing alleles in a linear map, Sturtevant suggested that genes can range from linking perfectly (recombination frequency = 0) to unlinking perfectly (recombination frequency = 0.5) when genes are on different chromosomes or genes separate very far apart on the same chromosome. Perfectly unlinked genes correspond to the frequencies Mendel predicted to assort independently in a dihybrid cross. A 0.5 recombination frequency indicates that 50 percent of offspring are recombinants and the other 50 percent are parental types. That is, every type of allele combination is represented with equal frequency. This representation allowed Sturtevant to additively calculate distances between several genes on the same chromosome. However, as the genetic distances approached 0.50, his predictions became less accurate because it was not clear whether the genes were very far apart on the same or on different chromosomes.

In 1931, Barbara McClintock and Harriet Creighton demonstrated the crossover of homologous chromosomes in corn plants. Weeks later, Curt Stern demonstrated microscopically homologous recombination in Drosophila. Stern observed several X-linked phenotypes that were associated with a structurally unusual and dissimilar X chromosome pair in which one X was missing a small terminal segment, and the other X was fused to a piece of the Y chromosome. By crossing flies, observing their offspring, and then visualizing the offspring’s chromosomes, Stern demonstrated that every time the offspring allele combination deviated from either of the parental combinations, there was a corresponding exchange of an X chromosome segment. Using mutant flies with structurally distinct X chromosomes was the key to observing the products of recombination because DNA sequencing and other molecular tools were not yet available. We now know that homologous chromosomes regularly exchange segments in meiosis by reciprocally breaking and rejoining their DNA at precise locations.

Review Sturtevant’s process to create a genetic map on the basis of recombination frequencies here.

Homologous recombination is a common genetic process, yet Mendel never observed it. Had he investigated both linked and unlinked genes, it would have been much more difficult for him to create a unified model of his data on the basis of probabilistic calculations. Researchers who have since mapped the seven traits that Mendel investigated onto a pea plant genome’s seven chromosomes have confirmed that all the genes he examined are either on separate chromosomes or are sufficiently far apart as to be statistically unlinked. Some have suggested that Mendel was enormously lucky to select only unlinked genes; whereas, others question whether Mendel discarded any data suggesting linkage. In any case, Mendel consistently observed independent assortment because he examined genes that were effectively unlinked.

Sutton and Boveri’s Chromosomal Theory of Inheritance states that chromosomes are the vehicles of genetic heredity. Neither Mendelian genetics nor gene linkage is perfectly accurate. Instead, chromosome behavior involves segregation, independent assortment, and occasionally, linkage. Sturtevant devised a method to assess recombination frequency and infer linked genes’ relative positions and distances on a chromosome on the basis of the average number of crossovers in the intervening region between the genes. Sturtevant correctly presumed that genes are arranged in serial order on chromosomes and that recombination between homologs can occur anywhere on a chromosome with equal likelihood. Whereas linkage causes alleles on the same chromosome to be inherited together, homologous recombination biases alleles toward an independent inheritance pattern.

recombination frequency
average number of crossovers between two alleles; observed as the number of nonparental types in a progeny’s population