Our current understanding of DNA began with the discovery of nucleic acids followed by the development of the double-helix model. In the 1860s, Friedrich Miescher ((Figure)), a physician by profession, isolated phosphate-rich chemicals from white blood cells (leukocytes). He named these chemicals (which would eventually be known as DNA) nuclein because they were isolated from the nuclei of the cells. 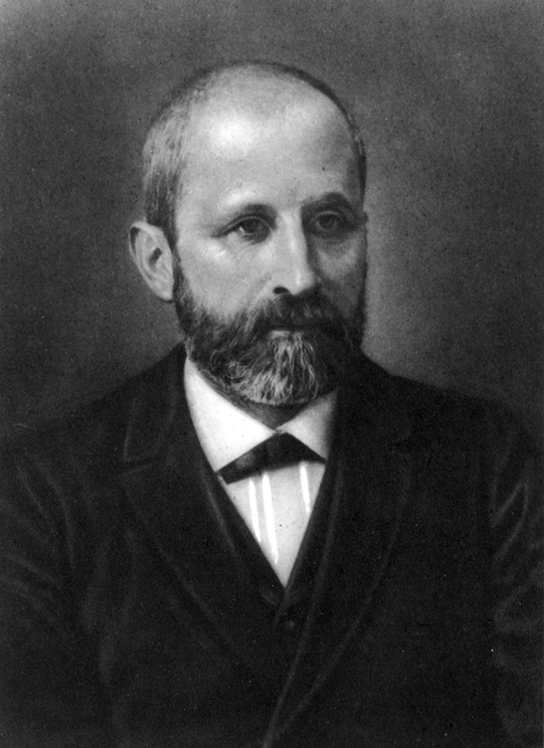 To see Miescher conduct his experiment that led to his discovery of DNA and associated proteins in the nucleus, click through this review.

A half century later, in 1928, British bacteriologist Frederick Griffith reported the first demonstration of bacterial transformation—a process in which external DNA is taken up by a cell, thereby changing its morphology and physiology. Griffith conducted his experiments with Streptococcus pneumoniae, a bacterium that causes pneumonia. Griffith worked with two strains of this bacterium called rough (R) and smooth (S). (The two cell types were called “rough” and “smooth” after the appearance of their colonies grown on a nutrient agar plate.)

The R strain is non-pathogenic (does not cause disease). The S strain is pathogenic (disease-causing), and has a capsule outside its cell wall. The capsule allows the cell to escape the immune responses of the host mouse.

When Griffith injected the living S strain into mice, they died from pneumonia. In contrast, when Griffith injected the live R strain into mice, they survived. In another experiment, when he injected mice with the heat-killed S strain, they also survived. This experiment showed that the capsule alone was not the cause of death. In a third set of experiments, a mixture of live R strain and heat-killed S strain were injected into mice, and—to his surprise—the mice died. Upon isolating the live bacteria from the dead mouse, only the S strain of bacteria was recovered. When this isolated S strain was injected into fresh mice, the mice died. Griffith concluded that something had passed from the heat-killed S strain into the live R strain and transformed it into the pathogenic S strain. He called this the transforming principle ((Figure)). These experiments are now known as Griffith’s transformation experiments.

Two strains of S. pneumoniae were used in Griffith’s transformation experiments. The R strain is non-pathogenic, whereas the S strain is pathogenic and causes death. When Griffith injected a mouse with the heat-killed S strain and a live R strain, the mouse died. The S strain was recovered from the dead mouse. Griffith concluded that something had passed from the heat-killed S strain to the R strain, transforming the R strain into the S strain in the process. (credit “living mouse”: modification of work by NIH; credit “dead mouse”: modification of work by Sarah Marriage)

Scientists Oswald Avery, Colin MacLeod, and Maclyn McCarty (1944) were interested in exploring this transforming principle further. They isolated the S strain from the dead mice and isolated the proteins and nucleic acids (RNA and DNA) as these were possible candidates for the molecule of heredity. They used enzymes that specifically degraded each component and then used each mixture separately to transform the R strain. They found that when DNA was degraded, the resulting mixture was no longer able to transform the bacteria, whereas all of the other combinations were able to transform the bacteria. This led them to conclude that DNA was the transforming principle.

Forensic ScientistForensic Scientists used DNA analysis evidence for the first time to solve an immigration case. The story started with a teenage boy returning to London from Ghana to be with his mother. Immigration authorities at the airport were suspicious of him, thinking that he was traveling on a forged passport. After much persuasion, he was allowed to go live with his mother, but the immigration authorities did not drop the case against him. All types of evidence, including photographs, were provided to the authorities, but deportation proceedings were started nevertheless. Around the same time, Dr. Alec Jeffreys of Leicester University in the United Kingdom had invented a technique known as DNA fingerprinting. The immigration authorities approached Dr. Jeffreys for help. He took DNA samples from the mother and three of her children, as well as an unrelated mother, and compared the samples with the boy’s DNA. Because the biological father was not in the picture, DNA from the three children was compared with the boy’s DNA. He found a match in the boy’s DNA for both the mother and his three siblings. He concluded that the boy was indeed the mother’s son.

Forensic scientists analyze many items, including documents, handwriting, firearms, and biological samples. They analyze the DNA content of hair, semen, saliva, and blood, and compare it with a database of DNA profiles of known criminals. Analysis includes DNA isolation, sequencing, and sequence analysis. Forensic scientists are expected to appear at court hearings to present their findings. They are usually employed in crime labs of city and state government agencies. Geneticists experimenting with DNA techniques also work for scientific and research organizations, pharmaceutical industries, and college and university labs. Students wishing to pursue a career as a forensic scientist should have at least a bachelor’s degree in chemistry, biology, or physics, and preferably some experience working in a laboratory.

Although the experiments of Avery, McCarty and McLeod had demonstrated that DNA was the informational component transferred during transformation, DNA was still considered to be too simple a molecule to carry biological information. Proteins, with their 20 different amino acids, were regarded as more likely candidates. The decisive experiment, conducted by Martha Chase and Alfred Hershey in 1952, provided confirmatory evidence that DNA was indeed the genetic material and not proteins. Chase and Hershey were studying a bacteriophage—a virus that infects bacteria. Viruses typically have a simple structure: a protein coat, called the capsid, and a nucleic acid core that contains the genetic material (either DNA or RNA). The bacteriophage infects the host bacterial cell by attaching to its surface, and then it injects its nucleic acids inside the cell. The phage DNA makes multiple copies of itself using the host machinery, and eventually the host cell bursts, releasing a large number of bacteriophages. Hershey and Chase selected radioactive elements that would specifically distinguish the protein from the DNA in infected cells. They labeled one batch of phage with radioactive sulfur, 35S, to label the protein coat. Another batch of phage were labeled with radioactive phosphorus, 32P. Because phosphorous is found in DNA, but not protein, the DNA and not the protein would be tagged with radioactive phosphorus. Likewise, sulfur is absent from DNA, but present in several amino acids such as methionine and cysteine.

Each batch of phage was allowed to infect the cells separately. After infection, the phage bacterial suspension was put in a blender, which caused the phage coat to detach from the host cell. Cells exposed long enough for infection to occur were then examined to see which of the two radioactive molecules had entered the cell. The phage and bacterial suspension was spun down in a centrifuge. The heavier bacterial cells settled down and formed a pellet, whereas the lighter phage particles stayed in the supernatant. In the tube that contained phage labeled with 35S, the supernatant contained the radioactively labeled phage, whereas no radioactivity was detected in the pellet. In the tube that contained the phage labeled with 32P, the radioactivity was detected in the pellet that contained the heavier bacterial cells, and no radioactivity was detected in the supernatant. Hershey and Chase concluded that it was the phage DNA that was injected
into the cell and carried information to produce more phage particles, thus providing evidence that DNA was the genetic material and not proteins ((Figure)).

In Hershey and Chase’s experiments, bacteria were infected with phage radiolabeled with either 35S, which labels protein, or 32P, which labels DNA. Only 32P entered the bacterial cells, indicating that DNA is the genetic material. 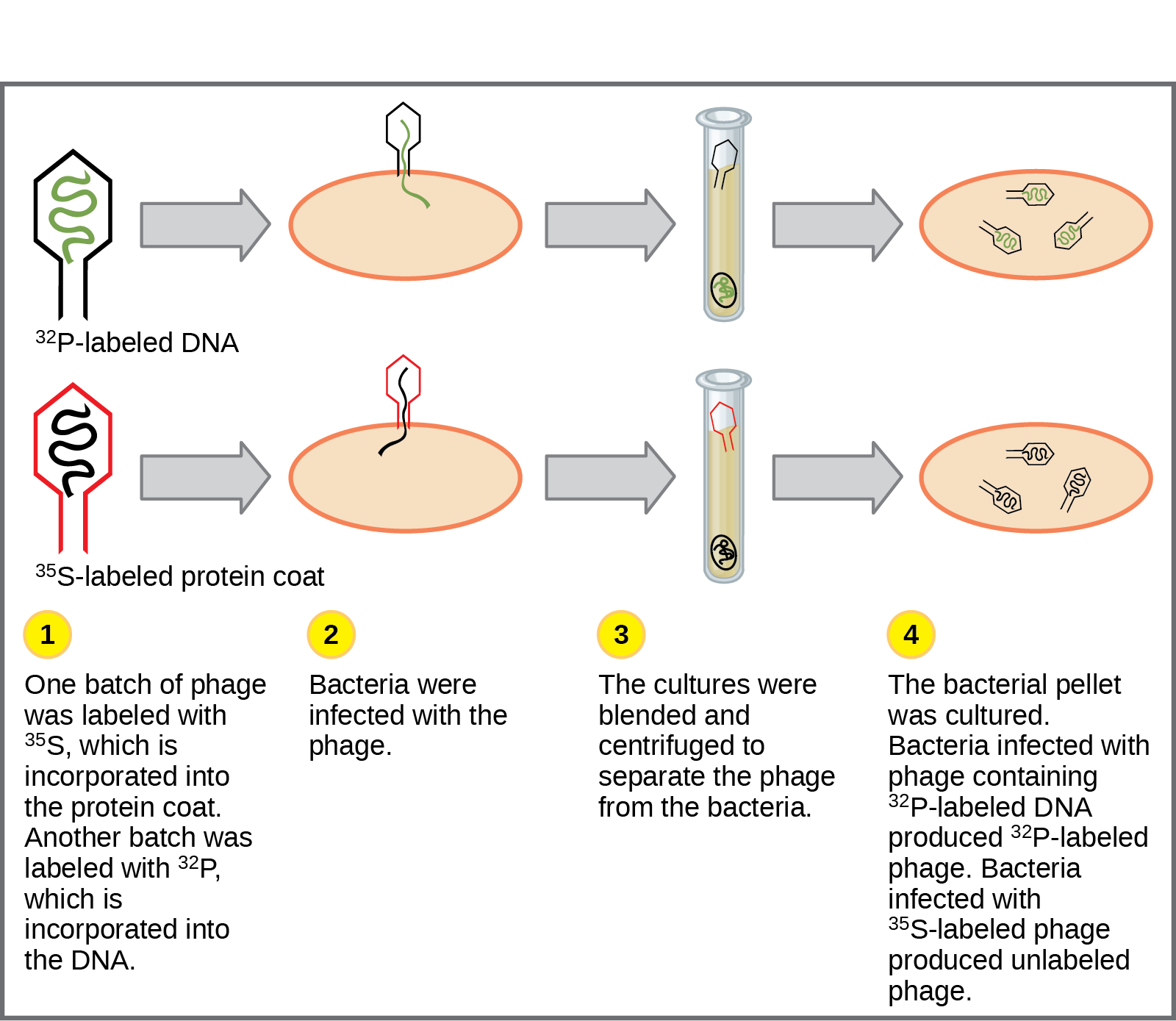 Around this same time, Austrian biochemist Erwin Chargaff examined the content of DNA in different species and found that the amounts of adenine, thymine, guanine, and cytosine were not found in equal quantities, and that relative concentrations of the four nucleotide bases varied from species to species, but not within tissues of the same individual or between individuals of the same species. He also discovered something unexpected: That the amount of adenine equaled the amount of thymine, and the amount of cytosine equaled the amount of guanine (that is, A = T and G = C). Different species had equal amounts of purines (A+G) and pyrimidines (T + C), but different ratios of A+T to G+C. These observations became known as Chargaff’s rules. Chargaff’s findings proved immensely useful when Watson and Crick were getting ready to propose their DNA double helix model! You can see after reading the past few pages how science builds upon previous discoveries, sometimes in a slow and laborious process.

DNA was first isolated from white blood cells by Friedrich Miescher, who called it nuclein because it was isolated from nuclei. Frederick Griffith’s experiments with strains of Streptococcus pneumoniae provided the first hint that DNA may be the transforming principle. Avery, MacLeod, and McCarty showed that DNA is required for the transformation of bacteria. Later experiments by Hershey and Chase using bacteriophage T2 proved that DNA is the genetic material. Chargaff found that the ratio of A = T and C = G, and that the percentage content of A, T, G, and C is different for different species.