Bryophytes are the closest extant relatives of early terrestrial plants. The first bryophytes (liverworts) most likely appeared in the Ordovician period, about 450 million years ago. Because they lack lignin and other resistant structures, the likelihood of bryophytes forming fossils is rather small. Some spores protected by sporopollenin have survived and are attributed to early bryophytes. By the Silurian period (435 MYA), however, vascular plants had spread through the continents. This compelling fact is used as evidence that non-vascular plants must have preceded the Silurian period.

More than 25,000 species of bryophytes thrive in mostly damp habitats, although some live in deserts. They constitute the major flora of inhospitable environments like the tundra, where their small size and tolerance to desiccation offer distinct advantages. They generally lack lignin and do not have actual tracheids (xylem cells specialized for water conduction). Rather, water and nutrients circulate inside specialized conducting cells. Although the term non-tracheophyte is more accurate, bryophytes are commonly called non-vascular plants.

In a bryophyte, all the conspicuous vegetative organs—including the photosynthetic leaf-like structures, the thallus (“plant body”), stem, and the rhizoid that anchors the plant to its substrate—belong to the haploid organism or gametophyte. The male gametes formed by bryophytes swim with a flagellum, so fertilization is dependent on the presence of water. The bryophyte embryo also remains attached to the parent plant, which protects and nourishes it. The sporophyte that develops from the embryo is barely noticeable. The sporangium—the multicellular sexual reproductive structure in which meiosis produces haploid spores—is present in bryophytes and absent in the majority of algae. This is also a characteristic of land plants.

The bryophytes are divided into three phyla: the liverworts or Hepaticophyta, the hornworts or Anthocerotophyta, and the mosses or true Bryophyta.

Liverworts (Hepaticophyta) are currently classified as the plants most closely related to the ancestor of vascular plants that adapted to terrestrial environments. In fact, liverworts have colonized every terrestrial habitat on Earth and diversified to more than 7000 existing species ((Figure)). Lobate liverworts form a flat thallus, with lobes that have a vague resemblance to the lobes of the liver ((Figure)), which accounts for the name given to the phylum. Leafy liverworts have tiny leaflike structures attached to a stalk. Several leafy liverworts are shown in (Figure).

Liverworts. This 1904 drawing shows the variety of forms of Hepaticophyta. 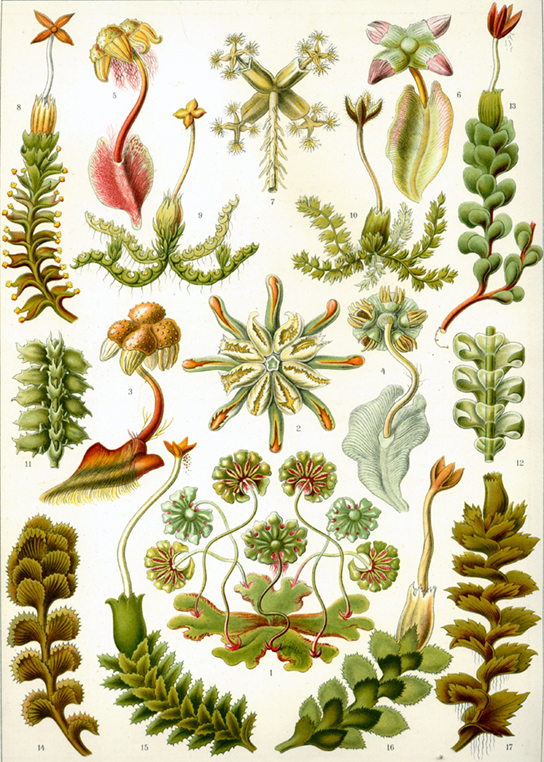 Liverwort gametophyte. A liverwort, Lunularia cruciata, displays its lobate, flat thallus. The organism in the photograph is in the gametophyte stage, but has not yet produced gametangia. Lunularia gametophytes produce crescent-shaped gemmae (circled), which contain asexual spores. The tiny white dots on the surface of the thallus are air pores. 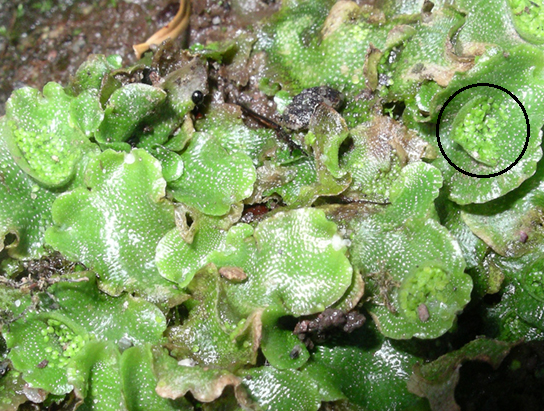 Openings in the thallus that allow the movement of gases may be observed in liverworts ((Figure)). However, these are not stomata, because they do not actively open and close by the action of guard cells. Instead, the thallus takes up water over its entire surface and has no cuticle to prevent desiccation, which explains their preferred wet habitats. (Figure) represents the lifecycle of a lobate liverwort. Haploid spores germinate into flattened thalli attached to the substrate by thin, single-celled filaments. Stalk-like structures (gametophores) grow from the thallus and carry male and female gametangia, which may develop on separate, individual plants, or on the same plant, depending on the species. Flagellated male gametes develop within antheridia (male gametangia). The female gametes develop within archegonia (female gametangia). Once released, the male gametes swim with the aid of their flagella to an archegonium, and fertilization ensues. The zygote grows into a small sporophyte still contained in the archegonium. The diploid zygote will give rise, by meiosis, to the next generation of haploid spores, which can be disseminated by wind or water. In many liverworts, spore dispersal is facilitated by elaters—long single cells that suddenly change shape as they dry out and throw adjacent spores out of the spore capsule. Liverwort plants can also reproduce asexually, by the breaking of “branches” or the spreading of leaf fragments called gemmae. In this latter type of reproduction, the gemmae—small, intact, complete pieces of plant that are produced in a cup on the surface of the thallus (shown in (Figure) and (Figure))—are splashed out of the cup by raindrops. The gemmae then land nearby and develop into gametophytes.

Reproductive cycle of liverworts. The life cycle of a typical lobate liverwort is shown. This image shows a liverwort in which antheridia and archegonia are produced on separate gametophytes. (credit: modification of work by Mariana Ruiz Villareal) 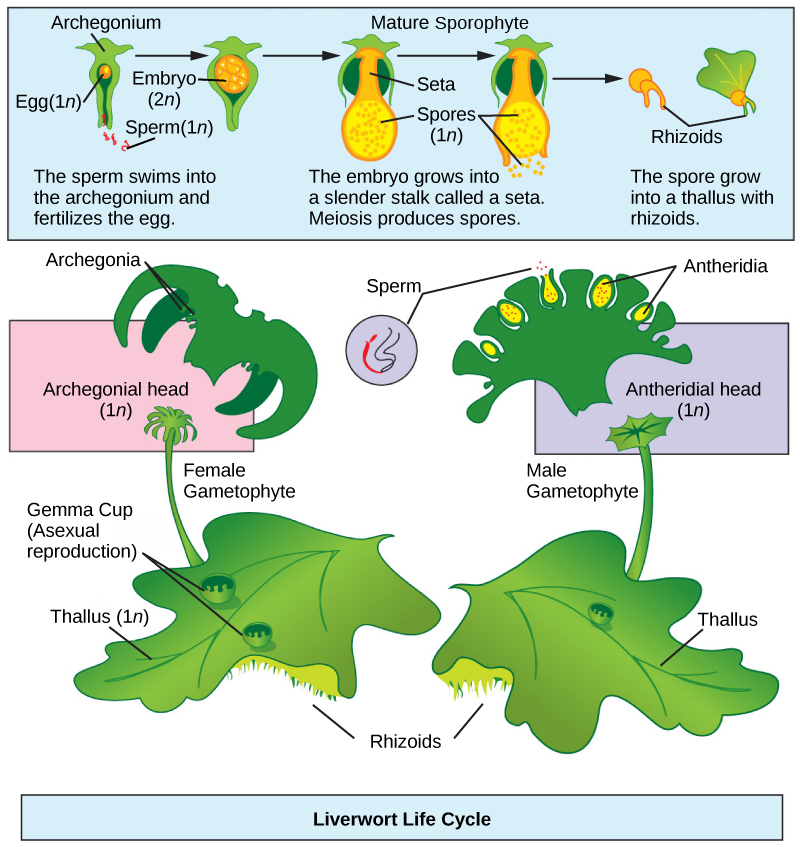 The defining characteristic of the hornworts (Anthocerotophyta) is the narrow, pipe-like sporophyte. Hornworts have colonized a variety of habitats on land, although they are never far from a source of moisture. The short, blue-green gametophyte is the dominant phase of the life cycle of a hornwort. The sporophytes emerge from the parent gametophyte and continue to grow throughout the life of the plant ((Figure)). 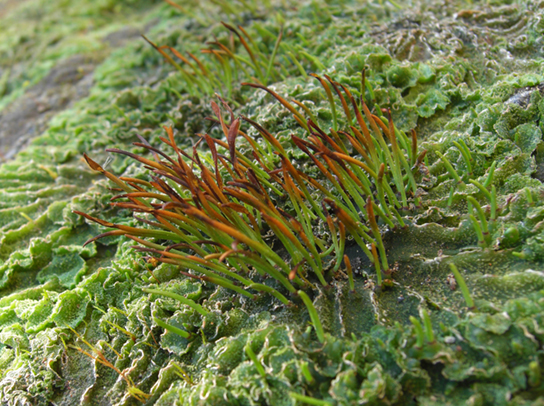 Stomata (air pores that can be opened and closed) appear in the hornworts and are abundant on the sporophyte. Photosynthetic cells in the thallus each contain a single chloroplast. Meristem cells at the base of the plant keep dividing and adding to the height of the sporophyte. This growth pattern is unique to the hornworts. Many hornworts establish symbiotic relationships with cyanobacteria that fix nitrogen from the environment.

The lifecycle of hornworts ((Figure)) follows the general pattern of alternation of generations. The gametophytes grow as flat thalli on the soil with embedded male and female gametangia. Flagellated sperm swim to the archegonia and fertilize eggs. The zygote develops into a long and slender sporophyte that eventually splits open down the side, releasing spores. Thin branched cells called pseudoelaters surround the spores and help propel them farther in the environment. The haploid spores germinate and give rise to the next generation of gametophytes.

Reproductive cycle of hornworts. The alternation of generation in hornworts is shown. (credit: modification of work by “Smith609”/Wikimedia Commons based on original work by Mariana Ruiz Villareal) 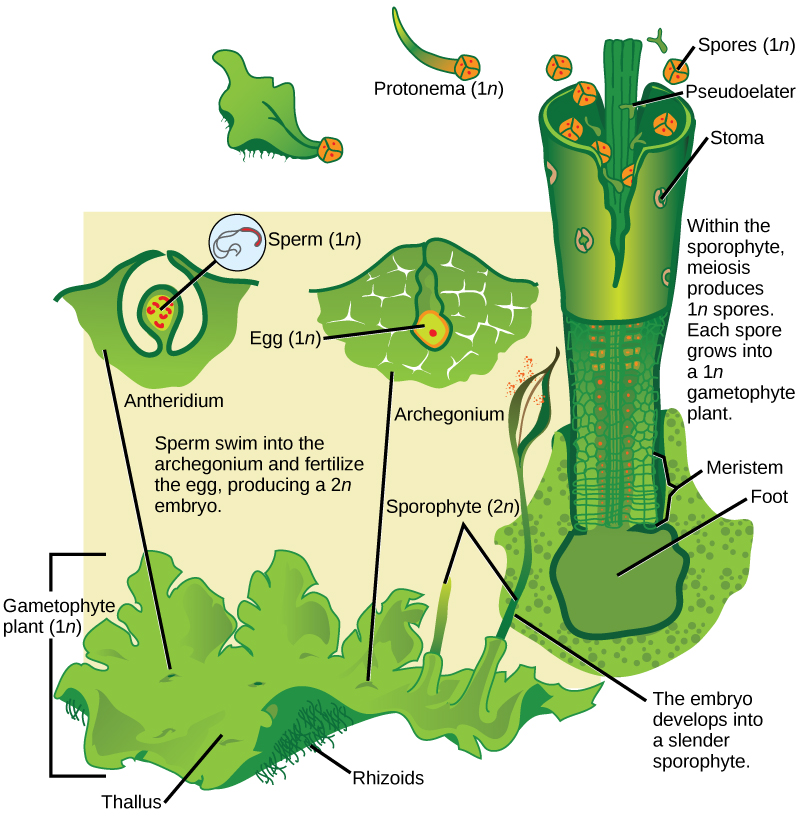 The mosses are the most numerous of the non-vascular plants. More than 10,000 species of mosses have been catalogued. Their habitats vary from the tundra, where they are the main vegetation, to the understory of tropical forests. In the tundra, the mosses’ shallow rhizoids allow them to fasten to a substrate without penetrating the frozen soil. Mosses slow down erosion, store moisture and soil nutrients, and provide shelter for small animals as well as food for larger herbivores, such as the musk ox. Mosses are very sensitive to air pollution and are used to monitor air quality. They are also sensitive to copper salts, so these salts are a common ingredient of compounds marketed to eliminate mosses from lawns.

Mosses form diminutive gametophytes, which are the dominant phase of the lifecycle. Green, flat structures with a simple midrib—resembling true leaves, but lacking stomata and vascular tissue—are attached in a spiral to a central stalk. Mosses have stomata only on the sporophyte. Water and nutrients are absorbed directly through the leaflike structures of the gametophyte. Some mosses have small branches. A primitive conductive system that carries water and nutrients runs up the gametophyte’s stalk, but does not extend into the leaves. Additionally, mosses are anchored to the substrate—whether it is soil, rock, or roof tiles—by multicellular rhizoids, precursors of roots. They originate from the base of the gametophyte, but are not the major route for the absorption of water and minerals. The lack of a true root system explains why it is so easy to rip moss mats from a tree trunk. The mosses therefore occupy a threshold position between other bryophytes and the vascular plants.

The moss lifecycle follows the pattern of alternation of generations as shown in (Figure). The most familiar structure is the haploid gametophyte, which germinates from a haploid spore and forms first a protonema—usually, a tangle of single-celled filaments that hug the ground. Cells akin to an apical meristem actively divide and give rise to a gametophore, consisting of a photosynthetic stem and foliage-like structures. Male and female gametangia develop at the tip of separate gametophores. The antheridia (male organs) produce many sperm, whereas the archegonia (the female organs) each form a single egg at the base (venter) of a flask-shaped structure. The archegonium produces attractant substances and at fertilization, the sperm swims down the neck to the venter and unites with the egg inside the archegonium. The zygote, protected by the archegonium, divides and grows into a sporophyte, still attached by its foot to the gametophyte. 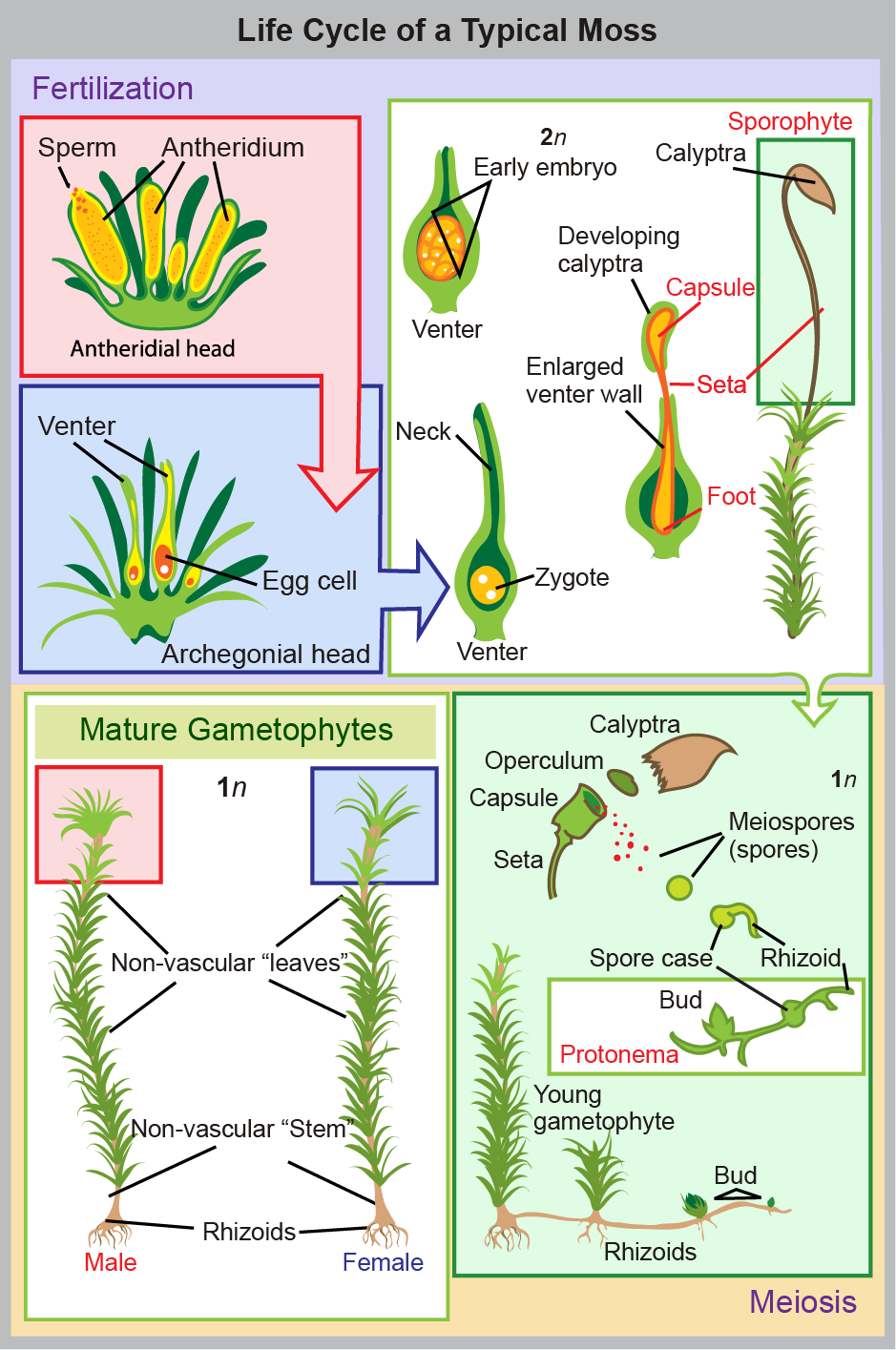 Which of the following statements about the moss life cycle is false?

The moss sporophyte is dependent on the gametophyte for nutrients. The slender seta (plural, setae), as seen in (Figure), contains tubular cells that transfer nutrients from the base of the sporophyte (the foot) to the sporangium or capsule.

Moss sporophyte. This photograph shows the long slender stems, called setae, connected to capsules of the moss Thamnobryum alopecurum. The operculum and remnants of the calyptra are visible in some capsules. (credit: modification of work by Hermann Schachner) 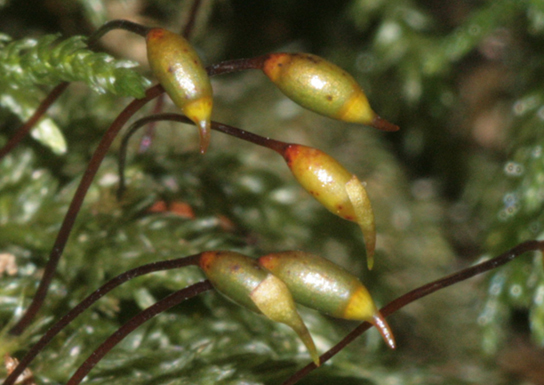 Spore mother cells in the sporangium undergo meiosis to produce haploid spores. The sporophyte has several features that protect the developing spores and aid in their dispersal. The calyptra, derived from the walls of the archegonium, covers the sporangium. A structure called the operculum is at the tip of the spore capsule. The calyptra and operculum fall off when the spores are ready for dispersal. The peristome, tissue around the mouth of the capsule, is made of triangular, close-fitting units like little “teeth.” The peristome opens and closes, depending on moisture levels, and periodically releases spores.

Seedless non-vascular plants are small, having the gametophyte as the dominant stage of the lifecycle. Without a vascular system and roots, they absorb water and nutrients on all their exposed surfaces. Collectively known as bryophytes, the three main groups include the liverworts, the hornworts, and the mosses. Liverworts are the most primitive plants and are closely related to the first land plants. Hornworts developed stomata and possess a single chloroplast per cell. Mosses have simple conductive cells and are attached to the substrate by rhizoids. They colonize harsh habitats and can regain moisture after drying out. The moss sporangium is a complex structure that allows release of spores away from the parent plant.

capsule
case of the sporangium in mosses

hornworts
group of non-vascular plants in which stomata appear

liverworts
most primitive group of the non-vascular plants

mosses
group of bryophytes in which a primitive conductive system appears

rhizoids
thin filaments that anchor the plant to the substrate

seta
stalk that supports the capsule in mosses