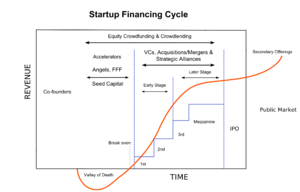 Diagram of the typical financing cycle for a startup company.

Startup investing is the action of making an investment in an early-stage company (the startup company). Beyond founders’ own contributions, some startups raise additional investment at some or several stages of their growth. Not all startups trying to raise investments are successful in their fundraising. The solicitation of funds became easier for startups as result of the JOBS Act.[24][25][26][27] Prior to the advent of equity crowdfunding, a form of online investing that has been legalized in several nations, startups did not advertise themselves to the general public as investment opportunities until and unless they first obtained approval from regulators for an initial public offering (IPO) that typically involved a listing of the startup’s securities on a stock exchange. Today, there are many alternative forms of IPO commonly employed by startups and startup promoters that do not include an exchange listing, so they may avoid certain regulatory compliance obligations, including mandatory periodic disclosures of financial information and factual discussion of business conditions by management that investors and potential investors routinely receive from registered public companies.[28]

When investing in a startup, there are different types of stages in which the investor can participate. The first round is called seed round. The seed round generally is when the startup is still in the very early phase of execution when their product is still in the prototype phase. At this level angel investors will be the ones participating. The next round is called Series A. At this point the company already has traction and may be making revenue. In Series A rounds venture capital firms will be participating alongside angels or super angel investors. The next rounds are Series B, C, and D. These three rounds are the ones leading towards the IPO. Venture capital firms and private equity firms will be participating.[33]

The first known investment-based crowdfunding platform for startups was launched in Feb. 2010 by Grow VC,[34] followed by the first US. based company ProFounder launching model for startups to raise investments directly on the site,[35] but ProFounder later decided to shut down its business due regulatory reasons preventing them from continuing,[36] having launched their model for US. markets prior to JOBS Act. With the positive progress of the JOBS Act for crowd investing in US., equity crowdfunding platforms like SeedInvest and CircleUp started to emerge in 2011 and platforms such as investiere, Companisto and Seedrs in Europe and OurCrowd in Israel. The idea of these platforms is to streamline the process and resolve the two main points that were taking place in the market. The first problem was for startups to be able to access capital and to decrease the amount of time that it takes to close a round of financing. The second problem was intended to increase the amount of deal flow for the investor and to also centralize the process.[37][38][39]

Venture capital (VC) is a type of private equity,[1] a form of financing that is provided by firms or funds to small, early-stage, emerging firms that are deemed to have high growth potential, or which have demonstrated high growth (in terms of number of employees, annual revenue, or both). Venture capital firms or funds invest in these early-stage companies in exchange for equity–an ownership stake–in the companies they invest in. Venture capitalists take on the risk of financing risky start-ups in the hopes that some of the firms they support will become successful. The start-ups are usually based on an innovative technology or business model and they are usually from the high technology industries, such as information technology (IT), social media or biotechnology.

The typical venture capital investment occurs after an initial “seed funding” round. The first round of institutional venture capital to fund growth is called the Series A round. Venture capitalists provide this financing in the interest of generating a return through an eventual “exit” event, such as the company selling shares to the public for the first time in an Initial public offering (IPO) or doing a merger and acquisition (also known as a “trade sale”) of the company.

In addition to angel investing, equity crowdfunding and other seed funding options, venture capital is attractive for new companies with limited operating history that are too small to raise capital in the public markets and have not reached the point where they are able to secure a bank loan or complete a debt offering. In exchange for the high risk that venture capitalists assume by investing in smaller and early-stage companies, venture capitalists usually get significant control over company decisions, in addition to a significant portion of the companies’ ownership (and consequently value). Companies like Uber, Airbnb, Flipkart, ReviewAdda, Xiaomi & Didi Chuxing are highly valued startups, where venture capitalists contribute more than financing to these early-stage firms; they also often provide strategic advice to the firm’s executives on its business model and marketing strategies.

Venture capital is also a way in which the private and public sectors can construct an institution that systematically creates business networks for the new firms and industries, so that they can progress and develop. This institution helps identify promising new firms and provide them with finance, technical expertise, mentoring, marketing “know-how”, and business models. Once integrated into the business network, these firms are more likely to succeed, as they become “nodes” in the search networks for designing and building products in their domain.[2] However, venture capitalists’ decisions are often biased, exhibiting for instance overconfidence and illusion of control, much like entrepreneurial decisions in general.[3]

An angel investor or angel (also known as a business angel, informal investor, angel funder, private investor, or seed investor) is an affluent individual who provides capital for a business start-up, usually in exchange for convertible debt or ownership equity. A small but increasing number of angel investors invest online through equity crowdfunding or organize themselves into angel groups or angel networks to share research and pool their investment capital, as well as to provide advice to their portfolio companies.[1]

Crowdfunding is the practice of funding a project or venture by raising monetary contributions from a large number of people. Crowdfunding is a form of crowdsourcing and of alternative finance. In 2015, it was estimated that worldwide over US$34 billion was raised this way.[1][2]

Although the concept can also be executed through mail-order subscriptions, benefit events, and other methods, it is now often performed via Internet-mediated registries.[3] This modern crowdfunding model is generally based on three types of actors: the project initiator who proposes the idea and/or project to be funded, individuals or groups who support the idea, and a moderating organization (the “platform”) that brings the parties together to launch the idea.[4]

Crowdfunding has been used to fund a wide range for-profit entrepreneurial ventures such as artistic and creative projects, medical expenses, travel, or community-oriented social entrepreneurship projects.