Computer software, or simply software, is that part of a computer system that consists of encoded information or computer instructions, in contrast to the physical hardware from which the system is built. 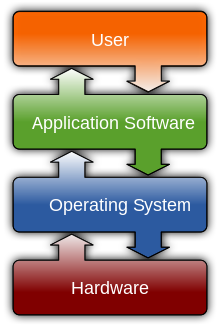 The term “software” was first proposed by Alan Turing and used in this sense by John W. Tukey in 1957. In computer science and software engineering, computer software is all information processed by computer systems, programs and data.

Computer software includes computer programs, libraries and related non-executable data, such as online documentation or digital media. Computer hardware and software require each other and neither can be realistically used on its own.

At the lowest level, executable code consists of machine language instructions specific to an individual processor—typically a central processing unit (CPU). A machine language consists of groups of binary values signifying processor instructions that change the state of the computer from its preceding state. For example, an instruction may change the value stored in a particular storage location in the computer—an effect that is not directly observable to the user. An instruction may also (indirectly) cause something to appear on a display of the computer system—a state change which should be visible to the user. The processor carries out the instructions in the order they are provided, unless it is instructed to “jump” to a different instruction, or interrupted.

An outline (algorithm) for what would have been the first piece of software was written by Ada Lovelace in the 19th century, for the planned Analytical Engine. However, neither the Analytical Engine nor any software for it were ever created

The first theory about software—prior to creation of computers as we know them today—was proposed by Alan Turing in his 1935 essay Computable numbers with an application to the Entscheidungsproblem (decision problem).

However, prior to 1946, software as we now understand it—programs stored in the memory of stored-program digital computers—did not yet exist. The very first electronic computing devices were instead rewired in order to “reprogram” them.

Ada Lovelace is considered by many to be the first computer programmer, as she wrote the first algorithm that was designed to be executed by Charle’s Babbage’s Analytical Engine. Many people assume that computers, and related technologies, were mostly created by men. This is not true, as Lovelace, and countless other women, made large contributions to the evolution of computing and related technologies.

On virtually all computer platforms, software can be grouped into a few broad categories.

Purpose, or domain of use

Based on the goal, computer software can be divided into:

Programming tools are also software in the form of programs or applications that software developers (also known as programmers, coders, hackers or software engineers) use to create, debug, maintain (i.e. improve or fix), or otherwise support software. Software is written in one or more programming languages; there are many programming languages in existence, and each has at least one implementation, each of which consists of its own set of programming tools. These tools may be relatively self-contained programs such as compilers, debuggers,interpreters, linkers, and text editors, that can be combined together to accomplish a task; or they may form an integrated development environment (IDE), which combines much or all of the functionality of such self-contained tools. IDEs may do this by either invoking the relevant individual tools or by re-implementing their functionality in a new way. An IDE can make it easier to do specific tasks, such as searching in files in a particular project. Many programming language implementations provide the option of using both individual tools or an IDE.