Chapter 6: The Importance of Data

Data is a set of values of subjects with respect to qualitative or quantitativevariables.

Data and information or knowledge are often used interchangeably; however data becomes information when it is viewed in context or in post-analysis.[1] While the concept of data is commonly associated with scientific research, data is collected by a huge range of organizations and institutions, including businesses (e.g., sales data, revenue, profits, stock price), governments (e.g., crime rates, unemployment rates, literacy rates) and non-governmental organizations (e.g., censuses of the number of homeless people by non-profit organizations).

Data is measured, collected and reported, and analyzed, whereupon it can be visualized using graphs, images or other analysis tools. Data as a general concept refers to the fact that some existing information or knowledge is represented or coded in some form suitable for better usage or processing. Raw data (“unprocessed data”) is a collection of numbers or characters before it has been “cleaned” and corrected by researchers. Raw data needs to be corrected to remove outliers or obvious instrument or data entry errors (e.g., a thermometer reading from an outdoor Arctic location recording a tropical temperature). Data processing commonly occurs by stages, and the “processed data” from one stage may be considered the “raw data” of the next stage. Field data is raw data that is collected in an uncontrolled “in situ” environment. Experimental data is data that is generated within the context of a scientific investigation by observation and recording. Data has been described as the new oil of the digital economy.[2][3]

Big data is a term for data sets that are so large or complex that traditional data processing applications are inadequate to deal with them. Challenges include analysis, capture, data curation, search, sharing, storage, transfer, visualization, querying, updating and information privacy. The term “big data” often refers simply to the use of predictive analytics, user behavior analytics, or certain other advanced data analytics methods that extract value from data, and seldom to a particular size of data set.[2]“There is little doubt that the quantities of data now available are indeed large, but that’s not the most relevant characteristic of this new data ecosystem.”[3]

Data sets grow rapidly – in part because they are increasingly gathered by cheap and numerous information-sensing mobile devices, aerial (remote sensing), software logs, cameras, microphones, radio-frequency identification (RFID) readers and wireless sensor networks.[7][8] The world’s technological per-capita capacity to store information has roughly doubled every 40 months since the 1980s;[9]as of 2012, every day 2.5 exabytes (2.5×1018) of data is generated.[10] One question for large enterprises is determining who should own big-data initiatives that affect the entire organization.[11]

Relational database management systems and desktop statistics- and visualization-packages often have difficulty handling big data. The work may require “massively parallel software running on tens, hundreds, or even thousands of servers”.[12] What counts as “big data” varies depending on the capabilities of the users and their tools, and expanding capabilities make big data a moving target. “For some organizations, facing hundreds of gigabytes of data for the first time may trigger a need to reconsider data management options. For others, it may take tens or hundreds of terabytes before data size becomes a significant consideration.”[13] 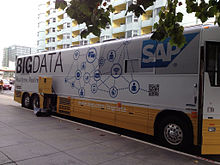 Big data has increased the demand of information management specialists in that Software AG, Oracle Corporation,IBM, Microsoft, SAP, EMC, HP and Dell have spent more than $15 billion on software firms specializing in data management and analytics. In 2010, this industry was worth more than $100 billion and was growing at almost 10 percent a year: about twice as fast as the software business as a whole.[4]

Developed economies increasingly use data-intensive technologies. There are 4.6 billion mobile-phone subscriptions worldwide, and between 1 billion and 2 billion people accessing the internet.[4] Between 1990 and 2005, more than 1 billion people worldwide entered the middle class, which means more people become more literate, which in turn leads to information growth. The world’s effective capacity to exchange information through telecommunication networks was 281 petabytes in 1986, 471 petabytes in 1993, 2.2 exabytes in 2000, 65 exabytes in 2007[9] and predictions put the amount of internet traffic at 667 exabytes annually by 2014.[4] According to one estimate, one third of the globally stored information is in the form of alphanumeric text and still image data,[54] which is the format most useful for most big data applications. This also shows the potential of yet unused data (i.e. in the form of video and audio content).

While many vendors offer off-the-shelf solutions for Big Data, experts recommend the development of in-house solutions custom-tailored to solve the company’s problem at hand if the company has sufficient technical capabilities.[55]

The use and adoption of big data within governmental processes is beneficial and allows efficiencies in terms of cost, productivity, and innovation,[56] but does not come without its flaws. Data analysis often requires multiple parts of government (central and local) to work in collaboration and create new and innovative processes to deliver the desired outcome. Below are the thought[by whom?] leading examples within the governmental big data space.

Based on TCS 2013 Global Trend Study, improvements in supply planning and product quality provide the greatest benefit of big data for manufacturing.[73] Big data provides an infrastructure for transparency in manufacturing industry, which is the ability to unravel uncertainties such as inconsistent component performance and availability. Predictive manufacturing as an applicable approach toward near-zero downtime and transparency requires vast amount of data and advanced prediction tools for a systematic process of data into useful information.[74] A conceptual framework of predictive manufacturing begins with data acquisition where different type of sensory data is available to acquire such as acoustics, vibration, pressure, current, voltage and controller data. Vast amount of sensory data in addition to historical data construct the big data in manufacturing. The generated big data acts as the input into predictive tools and preventive strategies such as Prognostics and Health Management (PHM).[75][76]

Current PHM implementations mostly use data during the actual usage while analytical algorithms can perform more accurately when more information throughout the machine’s lifecycle, such as system configuration, physical knowledge and working principles, are included. There is a need to systematically integrate, manage and analyze machinery or process data during different stages of machine life cycle to handle data/information more efficiently and further achieve better transparency of machine health condition for manufacturing industry.

With such motivation a cyber-physical (coupled) model scheme has been developed. The coupled model is a digital twin of the real machine that operates in the cloud platform and simulates the health condition with an integrated knowledge from both data driven analytical algorithms as well as other available physical knowledge. It can also be described as a 5S systematic approach consisting of sensing, storage, synchronization, synthesis and service. The coupled model first constructs a digital image from the early design stage. System information and physical knowledge are logged during product design, based on which a simulation model is built as a reference for future analysis. Initial parameters may be statistically generalized and they can be tuned using data from testing or the manufacturing process using parameter estimation. After that step, the simulation model can be considered a mirrored image of the real machine—able to continuously record and track machine condition during the later utilization stage. Finally, with the increased connectivity offered by cloud computing technology, the coupled model also provides better accessibility of machine condition for factory managers in cases where physical access to actual equipment or machine data is limited.[34]

Big data analytics has helped healthcare improve by providing personalized medicine and prescriptive analytics, clinical risk intervention and predictive analytics, waste and care variability reduction, automated external and internal reporting of patient data, standardized medical terms and patient registries and fragmented point solutions.[77] The level of data generated within healthcare systems is not trivial. With the added adoption of mHealth, eHealth and wearable technologies the volume of data will continue to increase. There is now an even greater need for such environments to pay greater attention to data and information quality.[78] “Big data very often means `dirty data’ and the fraction of data inaccuracies increases with data volume growth.” Human inspection at the big data scale is impossible and there is a desperate need in health service for intelligent tools for accuracy and believability control and handling of information missed.[79]

A McKinsey Global Institute study found a shortage of 1.5 million highly trained data professionals and managers[46] and a number of universities[80] including University of Tennessee and UC Berkeley, have created masters programs to meet this demand. Private bootcamps have also developed programs to meet that demand, including free programs like The Data Incubator or paid programs like General Assembly.[81]

To understand how the media utilizes Big Data, it is first necessary to provide some context into the mechanism used for media process. It has been suggested by Nick Couldry and Joseph Turow that practitioners in Media and Advertising approach big data as many actionable points of information about millions of individuals. The industry appears to be moving away from the traditional approach of using specific media environments such as newspapers, magazines, or television shows and instead tap into consumers with technologies that reach targeted people at optimal times in optimal locations. The ultimate aim is to serve, or convey, a message or content that is (statistically speaking) in line with the consumers mindset. For example, publishing environments are increasingly tailoring messages (advertisements) and content (articles) to appeal to consumers that have been exclusively gleaned through various data-mining activities.[82]

The Large Hadron Collider experiments represent about 150 million sensors delivering data 40 million times per second. There are nearly 600 million collisions per second. After filtering and refraining from recording more than 99.99995%[93] of these streams, there are 100 collisions of interest per second.[94][95][96]

The Square Kilometre Array is a radio telescope built of thousands of antennas. It is expected to be operational by 2024. Collectively, these antennas are expected to gather 14 exabytes and store one petabyte per day.[97][98] It is considered one of the most ambitious scientific projects ever undertaken.[99]

Big data can be used to improve training and understanding competitors, using sport sensors. Besides, it is possible to predict winners in a match using big data analytics.[105] Future performance of players could be predicted as well. Thus, players’ value and salary is determined by data collected throughout the season.[106]

The movie MoneyBall demonstrates how big data could be used to scout players and also identify undervalued players.[107]

In Formula One races, race cars with hundreds of sensors generate terabytes of data. These sensors collect data points from tire pressure to fuel burn efficiency. Then, this data is transferred to team headquarters in United Kingdom through fiber optic cables that could carry data at the speed of light.[108] Based on the data, engineers and data analysts decide whether adjustments should be made in order to win a race. Besides, using big data, race teams try to predict the time they will finish the race beforehand, based on simulations using data collected over the season.[109]