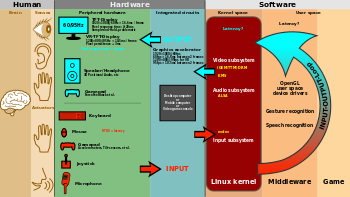 The graphical user interface is presented (displayed) on the computer screen. It is the result of processed user input and usually the primary interface for human-machine interaction. The touch user interfaces popular on small mobile devices are an overlay of the visual output to the visual input.

Good user interface design facilitates finishing the task at hand without drawing unnecessary attention to itself. Graphic design and typography are utilized to support its usability, influencing how the user performs certain interactions and improving the aesthetic appeal of the design; design aesthetics may enhance or detract from the ability of users to use the functions of the interface.[1] The design process must balance technical functionality and visual elements (e.g., mental model) to create a system that is not only operational but also usable and adaptable to changing user needs.

Interface design is involved in a wide range of projects from computer systems, to cars, to commercial planes; all of these projects involve much of the same basic human interactions yet also require some unique skills and knowledge. As a result, designers tend to specialize in certain types of projects and have skills centered on their expertise, whether that be software design, user research, web design, or industrial design.

User interface design requires a good understanding of user needs. There are several phases and processes in the user interface design, some of which are more demanded upon than others, depending on the project.[2] (Note: for the remainder of this section, the word system is used to denote any project whether it is a website, application, or device.)

The concept of usability is defined of the ISO 9241 standard by effectiveness, efficiency, and satisfaction of the user. Part 11 gives the following definition of usability:

Effectiveness, efficiency, and satisfaction can be seen as quality factors of usability. To evaluate these factors, they need to be decomposed into sub-factors, and finally, into usability measures.

The information presentation is described in Part 12 of the ISO 9241 standard for the organization of information (arrangement, alignment, grouping, labels, location), for the display of graphical objects, and for the coding of information (abbreviation, color, size, shape, visual cues) by seven attributes. The “attributes of presented information” represent the static aspects of the interface and can be generally regarded as the “look” of the interface. The attributes are detailed in the recommendations given in the standard. Each of the recommendations supports one or more of the seven attributes. The seven presentation attributes are:

User interface design has been a topic of considerable research, including on its aesthetics.[5] Standards have been developed as far back as the 1980s for defining the usability of software products. One of the structural bases has become the IFIP user interface reference model. The model proposes four dimensions to structure the user interface:

This model has greatly influenced the development of the international standard ISO 9241 describing the interface design requirements for usability. The desire to understand application-specific UI issues early in software development, even as an application was being developed, led to research on GUI rapid prototyping tools that might offer convincing simulations of how an actual application might behave in production use.[6] Some of this research has shown that a wide variety of programming tasks for GUI-based software can, in fact, be specified through means other than writing program code.[7]

Research in recent years is strongly motivated by the increasing variety of devices that can, by virtue of Moore’s law, host very complex interfaces.[8]

Research has also been conducted on generating user interfaces automatically, to match a user’s level of ability for different levels of interaction.[9]