As a field of research, human-computer interaction is situated at the intersection of computer science, behavioral sciences, design, media studies, and several other fields of study. The term was popularized by Stuart K. Card, Allen Newell, and Thomas P. Moran in their seminal 1983 book, The Psychology of Human-Computer Interaction, although the authors first used the term in 1980[1] and the first known use was in 1975.[2] The term connotes that, unlike other tools with only limited uses (such as a hammer, useful for driving nails but not much else), a computer has many uses and this takes place as an open-ended dialog between the user and the computer. The notion of dialog likens human-computer interaction to human-to-human interaction, an analogy which is crucial to theoretical considerations in the field.[3][4]

Humans interact with computers in many ways; and the interface between humans and the computers they use is crucial to facilitating this interaction. Desktop applications, internet browsers, handheld computers, and computer kiosks make use of the prevalent graphical user interfaces (GUI) of today.[5] Voice user interfaces (VUI) are used for speech recognition and synthesising systems, and the emerging multi-modal and gestalt User Interfaces (GUI) allow humans to engage with embodied character agents in a way that cannot be achieved with other interface paradigms. The growth in human-computer interaction field has been in quality of interaction, and in different branching in its history. Instead of designing regular interfaces, the different research branches have had different focus on the concepts of multimodality rather than unimodality, intelligent adaptive interfaces rather than command/action based ones, and finally active rather than passive interfaces[citation needed]

The Association for Computing Machinery (ACM) defines human-computer interaction as “a discipline concerned with the design, evaluation and implementation of interactive computing systems for human use and with the study of major phenomena surrounding them”.[5] An important facet of HCI is the securing of user satisfaction (or simply End User Computing Satisfaction). “Because human–computer interaction studies a human and a machine in communication, it draws from supporting knowledge on both the machine and the human side. On the machine side, techniques in computer graphics, operating systems, programming languages, and development environments are relevant. On the human side, communication theory, graphic and industrial design disciplines, linguistics, social sciences, cognitive psychology, social psychology, and human factors such as computer user satisfaction are relevant. And, of course, engineering and design methods are relevant.”[5] Due to the multidisciplinary nature of HCI, people with different backgrounds contribute to its success. HCI is also sometimes termed human–machine interaction (HMI), man–machine interaction (MMI) or computer–human interaction (CHI).

Poorly designed human-machine interfaces can lead to many unexpected problems. A classic example of this is the Three Mile Island accident, a nuclear meltdown accident, where investigations concluded that the design of the human–machine interface was at least partly responsible for the disaster.[6][7][8] Similarly, accidents in aviation have resulted from manufacturers’ decisions to use non-standard flight instrument or throttle quadrant layouts: even though the new designs were proposed to be superior in basic human–machine interaction, pilots had already ingrained the “standard” layout and thus the conceptually good idea actually had undesirable results.

Much of the research in the field of human-computer interaction takes an interest in: 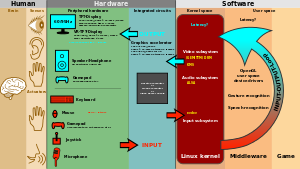 Repeat the iterative design process until a sensible, user-friendly interface is created.[14]

A number of diverse methodologies outlining techniques for human–computer interaction design have emerged since the rise of the field in the 1980s. Most design methodologies stem from a model for how users, designers, and technical systems interact. Early methodologies, for example, treated users’ cognitive processes as predictable and quantifiable and encouraged design practitioners to look to cognitive science results in areas such as memory and attention when designing user interfaces. Modern models tend to focus on a constant feedback and conversation between users, designers, and engineers and push for technical systems to be wrapped around the types of experiences users want to have, rather than wrapping user experience around a completed system.

Topics in HCI include:

Computation is passing beyond computers into every object for which uses can be found. Embedded systems make the environment alive with little computations and automated processes, from computerized cooking appliances to lighting and plumbing fixtures to window blinds to automobile braking systems to greeting cards. To some extent, this development is already taking place. The expected difference in the future is the addition of networked communications that will allow many of these embedded computations to coordinate with each other and with the user. Human interfaces to these embedded devices will in many cases be very different from those appropriate to workstations.

A common staple of science fiction, augmented reality refers to the notion of layering relevant information into our vision of the world. Existing projects show real-time statistics to users performing difficult tasks, such as manufacturing. Future work might include augmenting our social interactions by providing additional information about those we converse with.

In recent years, there has been an explosion of social science research focusing on interactions as the unit of analysis. Much of this research draws from psychology, social psychology, and sociology. For example, one study found out that people expected a computer with a man’s name to cost more than a machine with a woman’s name.[20] Other research finds that individuals perceive their interactions with computers more positively than humans, despite behaving the same way towards these machines.[21]

In human and computer interactions, there usually exists a semantic gap between human and computer’s understandings towards mutual behaviors. Ontology (information science), as a formal representation of domain-specific knowledge, can be used to address this problem, through solving the semantic ambiguities between the two parties.[22]