Chapter 5: The Internet of Things

From Wikipedia, the free encyclopedia
(Redirected from Internet of Things) 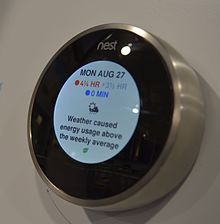 The internet of things (IoT) is the network of physical devices, vehicles, buildings and other items—embedded with electronics, software, sensors, actuators, and network connectivity that enable these objects to collect and exchange data.[1] In 2013 the Global Standards Initiative on Internet of Things (IoT-GSI) defined the IoT as “the infrastructure of the information society.” [2] The IoT allows objects to be sensed and controlled remotely across existing network infrastructure,[3] creating opportunities for more direct integration of the physical world into computer-based systems, and resulting in improved efficiency, accuracy and economic benefit.[4][5][6][7][8][9] When IoT is augmented with sensors and actuators, the technology becomes an instance of the more general class ofcyber-physical systems, which also encompasses technologies such as smart grids, smart homes, intelligent transportation and smart cities. Each thing is uniquely identifiable through its embedded computing system but is able to interoperate within the existing Internetinfrastructure. Experts estimate that the IoT will consist of almost 50 billion objects by 2020.[10]

British entrepreneur Kevin Ashton coined the term in 1999 while working at Auto-ID Labs (originally called Auto-ID centers, referring to a global network of objects connected to radio-frequency identification, or RFID).[11] Typically, IoT is expected to offer advanced connectivity of devices, systems, and services that goes beyond machine-to-machine (M2M) communications and covers a variety of protocols, domains, and applications.[12] The interconnection of these embedded devices (including smart objects), is expected to usher in automation in nearly all fields, while also enabling advanced applications like a smart grid,[13] and expanding to the areas such as smart cities.[14][15]

“Things,” in the IoT sense, can refer to a wide variety of devices such as heart monitoring implants, biochip transponders on farm animals, electric clams in coastal waters,[16]automobiles with built-in sensors, DNA analysis devices for environmental/food/pathogen monitoring[17] or field operation devices that assist firefighters in search and rescueoperations.[18] Legal scholars suggest to look at “Things” as an “inextricable mixture of hardware, software, data and service”.[19] These devices collect useful data with the help of various existing technologies and then autonomously flow the data between other devices.[20]Current market examples include smart thermostat systems and washer/dryers that use Wi-Fi for remote monitoring.

As well as the expansion of Internet-connected automation into a plethora of new application areas, IoT is also expected to generate large amounts of data from diverse locations, with the consequent necessity for quick aggregation of the data, and an increase in the need to index, store, and process such data more effectively. IoT is one of the platforms of today’s Smart City, and Smart Energy Management Systems.[21][22]

As of 2013, the vision of the internet of things has evolved due to a convergence of multiple technologies, ranging from wireless communication to the Internet and from embedded systemsto micro-electromechanical systems (MEMS).[18] This means that the traditional fields of embedded systems, wireless sensor networks, control systems, automation (including homeand building automation), and others all contribute to enabling the internet of things[23] (IoT).

The concept of a network of smart devices was discussed as early as 1982, with a modified Coke machine at Carnegie Mellon University becoming the first internet-connected appliance,[24]able to report its inventory and whether newly loaded drinks were cold.[25] Mark Weiser‘s seminal 1991 paper on ubiquitous computing, “The Computer of the 21st Century”, as well as academic venues such as UbiComp and PerCom produced the contemporary vision of IoT.[26][27] In 1994 Reza Raji described the concept in IEEE Spectrum as “[moving] small packets of data to a large set of nodes, so as to integrate and automate everything from home appliances to entire factories”.[28] Between 1993 and 1996 several companies proposed solutions like Microsoft‘s at Work or Novell‘s NEST. However, only in 1999 did the field start gathering momentum. Bill Joy envisioned Device to Device (D2D) communication as part of his “Six Webs” framework, presented at the World Economic Forum at Davos in 1999.[29]

The concept of the internet of things first became popular in 1999, through the Auto-ID Centerat MIT and related market-analysis publications.[30] Radio-frequency identification (RFID) was seen by Kevin Ashton (one of the founders of the original Auto-ID Center) as a prerequisite for the internet of things at that point.[31] If all objects and people in daily life were equipped with identifiers, computers could manage and inventory them.[32][33] Besides using RFID, the taggingof things may be achieved through such technologies as near field communication, barcodes,QR codes and digital watermarking.[34][35]

In its original interpretation,[when?] one of the first consequences of implementing the internet of things by equipping all objects in the world with minuscule identifying devices or machine-readable identifiers would be to transform daily life.[36][37] For instance, instant and ceaselessinventory control would become ubiquitous.[37] A person’s ability to interact with objects could be altered remotely based on immediate or present needs, in accordance with existing end-useragreements.[31] For example, such technology could grant motion-picture publishers much more control over end-user private devices by remotely enforcing copyright restrictions and digital restrictions management, so the ability of a customer who bought a Blu-ray disc to watch the movie becomes dependent on so-called “copyright holder’s” decision, similar to Circuit City’s failed DIVX. 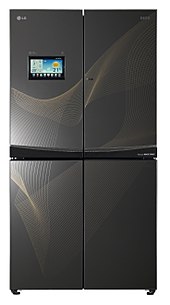 According to Gartner, Inc. (a technology research and advisory corporation), there will be nearly 20.8 billion devices on the internet of things by 2020.[38] ABI Research estimates that more than 30 billion devices will be wirelessly connected to the internet of things by 2020.[39] As per a recent survey and study done by Pew Research Internet Project, a large majority of the technology experts and engaged Internet users who responded—83 percent—agreed with the notion that the Internet/Cloud of Things, embedded and wearable computing (and the corresponding dynamic systems[40]) will have widespread and beneficial effects by 2025.[41] As such, it is clear that the IoT will consist of a very large number of devices being connected to the Internet.[42] In an active move to accommodate new and emerging technological innovation, the UK Government, in their 2015 budget, allocated £40,000,000 towards research into the internet of things. The British Chancellor of the ExchequerGeorge Osborne, posited that the internet of things is the next stage of the information revolution and referenced the inter-connectivity of everything from urban transport to medical devices to household appliances.[43]

Integration with the Internet implies that devices will use an IP address as a unique identifier. However, due to the limited address space of IPv4 (which allows for 4.3 billion unique addresses), objects in the IoT will have to use IPv6 to accommodate the extremely large address space required.[44][45][46][47][48] Objects in the IoT will not only be devices with sensory capabilities, but also provide actuation capabilities (e.g., bulbs or locks controlled over the Internet).[49] To a large extent, the future of the internet of things will not be possible without the support of IPv6; and consequently the global adoption of IPv6 in the coming years will be critical for the successful development of the IoT in the future.[45][46][47][48]

The ability to network embedded devices with limited CPU, memory and power resources means that IoT finds applications in nearly every field.[50] Such systems could be in charge of collecting information in settings ranging from natural ecosystems to buildings and factories,[49]thereby finding applications in fields of environmental sensing and urban planning.[51]
On the other hand, IoT systems could also be responsible for performing actions, not just sensing things. Intelligent shopping systems, for example, could monitor specific users’ purchasing habits in a store by tracking their specific mobile phones. These users could then be provided with special offers on their favorite products, or even location of items that they need, which their fridge has automatically conveyed to the phone.[52][53] Additional examples of sensing and actuating are reflected in applications that deal with heat, electricity and energy management, as well as cruise-assisting transportation systems.[54] Other applications that the internet of things can provide is enabling extended home security features and home automation.[55] The concept of an “internet of living things” has been proposed to describe networks of biological sensors that could use cloud-based analyses to allow users to study DNA or other molecules.[56] All these advances add to the numerous list of IoT applications. Now with IoT, you can control the electrical devices installed in your house while you are sorting out your files in office. Your water will be warm as soon as you get up in the morning for the shower. All credit goes to smart devices which make up the smart home. Everything connected with the help of Internet.[57]

However, the application of the IoT is not only restricted to these areas. Other specialized use cases of the IoT may also exist. An overview of some of the most prominent application areas is provided here. Based on the application domain, IoT products can be classified broadly into five different categories: smart wearable, smart home, smart city, smart environment, and smart enterprise. The IoT products and solutions in each of these markets have different characteristics.[58]