A disruptive innovation is an innovation that creates a new market and value network and eventually disrupts an existing market and value network, displacing established market leading firms, products and alliances. The term was defined and phenomenon analyzed by Clayton M. Christensen beginning in 1995.[2] In the early 2000s, “signiﬁcant societal impact” has also been used as an aspect of disruptive innovation.[3]

Not all innovations are disruptive, even if they are revolutionary. For example, the first automobiles in the late 19th century were not a disruptive innovation, because early automobiles were expensive luxury items that did not disrupt the market for horse-drawn vehicles. The market for transportation essentially remained intact until the debut of the lower-priced Ford Model T in 1908.[4] The mass-produced automobile was a disruptive innovation, because it changed the transportation market, whereas the first thirty years of automobiles did not.

Disruptive innovations tend to be produced by outsiders and entrepreneurs, rather than existing market-leading companies. The business environment of market leaders does not allow them to pursue disruptive innovations when they first arise, because they are not profitable enough at first and because their development can take scarce resources away from sustaining innovations (which are needed to compete against current competition).[5] A disruptive process can take longer to develop than by the conventional approach and the risk associated to it is higher than the other more incremental or evolutionary forms of innovations, but once it is deployed in the market, it achieves a much faster penetration and higher degree of impact on the established markets.[3]

History and usage of the term

The term disruptive technologies was coined by Clayton M. Christensen and introduced in his 1995 article Disruptive Technologies: Catching the Wave,[6] which he cowrote with Joseph Bower. The article is aimed at management executives who make the funding or purchasing decisions in companies, rather than the research community. He describes the term further in his book The Innovator’s Dilemma.[7] Innovator’s Dilemma explored the cases of the disk drive industry (which, with its rapid generational change, is to the study of business what fruit flies are to the study of genetics, as Christensen was advised in the 1990s[8]) and the excavating equipment industry (where hydraulic actuation slowly displaced cable-actuated movement). In his sequel with Michael E. Raynor, The Innovator’s Solution,[9] Christensen replaced the term disruptive technology with disruptive innovation because he recognized that few technologies are intrinsically disruptive or sustaining in character; rather, it is the business model that the technology enables that creates the disruptive impact. However, Christensen’s evolution from a technological focus to a business-modelling focus is central to understanding the evolution of business at the market or industry level. Christensen and Mark W. Johnson, who cofounded the management consulting firm Innosight, described the dynamics of “business model innovation” in the 2008 Harvard Business Review article “Reinventing Your Business Model”.[10] The concept of disruptive technology continues a long tradition of identifying radical technical change in the study of innovation by economists, and the development of tools for its management at a firm or policy level.

In the late 1990s, the automotive sector began to embrace a perspective of “constructive disruptive technology” by working with the consultant David E. O’Ryan, whereby the use of current off-the-shelf technology was integrated with newer innovation to create what he called “an unfair advantage”. The process or technology change as a whole had to be “constructive” in improving the current method of manufacturing, yet disruptively impact the whole of the business case model, resulting in a significant reduction of waste, energy, materials, labor, or legacy costs to the user.

In keeping with the insight that what matters economically is the business model, not the technological sophistication itself, Christensen’s theory explains why many disruptive innovations are not “advanced technologies”, which the technology mudslide hypothesis would lead one to expect. Rather, they are often novel combinations of existing off-the-shelf components, applied cleverly to a small, fledgling value network.

Christensen defines a disruptive innovation as a product or service designed for a new set of customers.

“Generally, disruptive innovations were technologically straightforward, consisting of off-the-shelf components put together in a product architecture that was often simpler than prior approaches. They offered less of what customers in established markets wanted and so could rarely be initially employed there. They offered a different package of attributes valued only in emerging markets remote from, and unimportant to, the mainstream.”[11]

Christensen argues that disruptive innovations can hurt successful, well-managed companies that are responsive to their customers and have excellent research and development. These companies tend to ignore the markets most susceptible to disruptive innovations, because the markets have very tight profit margins and are too small to provide a good growth rate to an established (sizable) firm.[12] Thus, disruptive technology provides an example of an instance when the common business-world advice to “focus on the customer” (or “stay close to the customer”, or “listen to the customer”) can be strategically counterproductive. 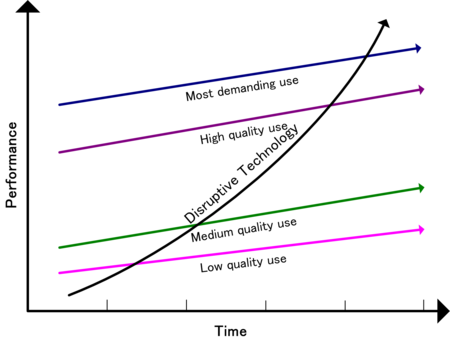 How low-end disruption occurs over time.

“Low-end disruption” occurs when the rate at which products improve exceeds the rate at which customers can adopt the new performance. Therefore, at some point the performance of the product overshoots the needs of certain customer segments. At this point, a disruptive technology may enter the market and provide a product that has lower performance than the incumbent but that exceeds the requirements of certain segments, thereby gaining a foothold in the market.

In low-end disruption, the disruptor is focused initially on serving the least profitable customer, who is happy with a good enough product. This type of customer is not willing to pay premium for enhancements in product functionality. Once the disruptor has gained a foothold in this customer segment, it seeks to improve its profit margin. To get higher profit margins, the disruptor needs to enter the segment where the customer is willing to pay a little more for higher quality. To ensure this quality in its product, the disruptor needs to innovate. The incumbent will not do much to retain its share in a not-so-profitable segment, and will move up-market and focus on its more attractive customers. After a number of such encounters, the incumbent is squeezed into smaller markets than it was previously serving. And then, finally, the disruptive technology meets the demands of the most profitable segment and drives the established company out of the market.

“New market disruption” occurs when a product fits a new or emerging market segment that is not being served by existing incumbents in the industry.
The extrapolation of the theory to all aspects of life has been challenged,[14][15] as has the methodology of relying on selected case studies as the principal form of evidence.[14] Jill Lepore points out that some companies identified by the theory as victims of disruption a decade or more ago, rather than being defunct, remain dominant in their industries today (including Seagate Technology, U.S. Steel, and Bucyrus).[14] Lepore questions whether the theory has been oversold and misapplied, as if it were able to explain everything in every sphere of life, including not just business but education and public institutions.[14]

Technology, being a form of social relationship[citation needed], always evolves. No technology remains fixed. Technology starts, develops, persists, mutates, stagnates, and declines, just like living organisms.[17] The evolutionary life cycle occurs in the use and development of any technology. A new high-technology core emerges and challenges existing technology support nets (TSNs), which are thus forced to coevolve with it. New versions of the core are designed and fitted into an increasingly appropriate TSN, with smaller and smaller high-technology effects. High technology becomes regular technology, with more efficient versions fitting the same support net. Finally, even the efficiency gains diminish, emphasis shifts to product tertiary attributes (appearance, style), and technology becomes TSN-preserving appropriate technology. This technological equilibrium state becomes established and fixated, resisting being interrupted by a technological mutation; then new high technology appears and the cycle is repeated.

Regarding this evolving process of technology, Christensen said:

“The technological changes that damage established companies are usually not radically new or difficult from a technological point of view. They do, however, have two important characteristics: First, they typically present a different package of performance attributes—ones that, at least at the outset, are not valued by existing customers. Second, the performance attributes that existing customers do value improve at such a rapid rate that the new technology can later invade those established markets.”[18]

Joseph Bower[19] explained the process of how disruptive technology, through its requisite support net, dramatically transforms a certain industry.

“When the technology that has the potential for revolutionizing an industry emerges, established companies typically see it as unattractive: it’s not something their mainstream customers want, and its projected profit margins aren’t sufficient to cover big-company cost structure. As a result, the new technology tends to get ignored in favor of what’s currently popular with the best customers. But then another company steps in to bring the innovation to a new market. Once the disruptive technology becomes established there, smaller-scale innovation rapidly raise the technology’s performance on attributes that mainstream customers’ value.”[20]

Milan Zeleny described the above phenomenon.[21] He also wrote that:

“Implementing high technology is often resisted. This resistance is well understood on the part of active participants in the requisite TSN. The electric car will be resisted by gas-station operators in the same way automated teller machines (ATMs) were resisted by bank tellers and automobiles by horsewhip makers. Technology does not qualitatively restructure the TSN and therefore will not be resisted and never has been resisted. Middle management resists business process reengineering because BPR represents a direct assault on the support net (coordinative hierarchy) they thrive on. Teamwork and multi-functionality is resisted by those whose TSN provides the comfort of narrow specialization and command-driven work.”[22]

In the practical world, the popularization of personal computers illustrates how knowledge contributes to the ongoing technology innovation. The original centralized concept (one computer, many persons) is a knowledge-defying idea of the prehistory of computing, and its inadequacies and failures have become clearly apparent. The era of personal computing brought powerful computers “on every desk” (one person, one computer). This short transitional period was necessary for getting used to the new computing environment, but was inadequate from the vantage point of producing knowledge. Adequate knowledge creation and management come mainly from networking and distributed computing (one person, many computers). Each person’s computer must form an access point to the entire computing landscape or ecology through the Internet of other computers, databases, and mainframes, as well as production, distribution, and retailing facilities, and the like. For the first time, technology empowers individuals rather than external hierarchies. It transfers influence and power where it optimally belongs: at the loci of the useful knowledge. Even though hierarchies and bureaucracies do not innovate, free and empowered individuals do; knowledge, innovation, spontaneity, and self-reliance are becoming increasingly valued and promoted.[25]