Chapter 5: The Internet of Things

Environmental monitoring applications of the IoT typically use sensors to assist in environmental protection[63] by monitoring air or water quality,[16] atmospheric or soil conditions,[64] and can even include areas like monitoring the movements of wildlife and their habitats.[65] Development of resource constrained devices connected to the Internet also means that other applications like earthquake or tsunami early-warning systems can also be used by emergency services to provide more effective aid. IoT devices in this application typically span a large geographic area and can also be mobile.[49] It has been argued that the standardization IoT brings to wireless sensing will revolutionize this area.[66]

Monitoring and controlling operations of urban and rural infrastructures like bridges, railway tracks, on- and offshore- wind-farms is a key application of the IoT.[67] The IoT infrastructure can be used for monitoring any events or changes in structural conditions that can compromise safety and increase risk. It can also be used for scheduling repair and maintenance activities in an efficient manner, by coordinating tasks between different service providers and users of these facilities.[49] IoT devices can also be used to control critical infrastructure like bridges to provide access to ships. Usage of IoT devices for monitoring and operating infrastructure is likely to improve incident management and emergency response coordination, and quality of service, up-times and reduce costs of operation in all infrastructure related areas.[68] Even areas such as waste management can benefit from automation and optimization that could be brought in by the IoT.[69]

Network control and management of manufacturing equipment, asset, and situation management, or manufacturing process control bring the IoT within the realm on industrial applications and smart manufacturing as well.[70] The IoT intelligent systems enable rapid manufacturing of new products, dynamic response to product demands, and real-time optimization of manufacturing production and supply chain networks, by networking machinery, sensors and control systems together.[49]

Digital control systems to automate process controls, operator tools and service information systems to optimize plant safety and security are within the purview of the IoT.[67] But it also extends itself to asset management via predictive maintenance, statistical evaluation, and measurements to maximize reliability.[71] Smart industrial management systems can also be integrated with the Smart Grid, thereby enabling real-time energy optimization. Measurements, automated controls, plant optimization, health and safety management, and other functions are provided by a large number of networked sensors.[49]

The term IIOT (industrial internet of things) is often encountered in the manufacturing industries, referring to the industrial subset of the IoT. IIoT in manufacturing would probably generate so much business value that it will eventually lead to the fourth industrial revolution, so the so-called Industry 4.0. It is estimated that in the future, successful companies will be able to increase their revenue through internet of things by creating new business models and improve productivity, exploit analytics for innovation, and transform workforce.[74] The potential of growth by implementing IIoT will generate $12 trillion of global GDP by 2030.[75] 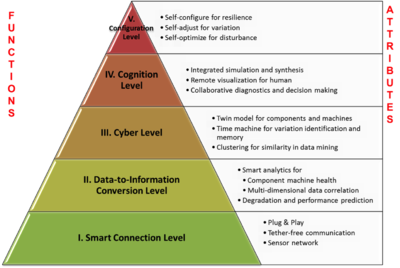 While connectivity and data acquisition are imperative for IIoT, they should be the foundation and path to something bigger but not the purpose. Among all the technologies, predictive maintenance is probably a relatively “easier win” since it is applicable to existing assets and management systems. The objective of intelligent maintenance systems is to reduce unexpected downtime and increase productivity. And to realize that alone would generate around up to 30% over total maintenance costs.[77] Industrial big data analytics will play a vital role in manufacturing asset predictive maintenance, although that is not the only capability of industrial big data.[78][79] Cyber-physical systems (CPS) is the core technology of industrial big data and it is will be an interface between human and the cyber world. Cyber-physical systems can be designed by following the 5C (connection, conversion, cyber, cognition, configuration) architecture,[76] and it will transform the collected data into actionable information, and eventually interfere with the physical assets to optimize processes.

An IoT-enabled intelligent system of such cases has been demonstrated by the NSF Industry/University Collaborative Research Center for Intelligent Maintenance Systems (IMS) at University of Cincinnati on a band saw machine in IMTS 2014 in Chicago.[80] Band saw machines are not necessarily expensive, but the band saw belt expenses are enormous since they degrade much faster. However, without sensing and intelligent analytics, it can be only determined by experience when the band saw belt will actually break. The developed prognostics system will be able to recognize and monitor the degradation of band saw belts even if the condition is changing, so that users will know in near real time when is the best time to replace band saw. This will significantly improve user experience and operator safety, and save costs on replacing band saw belts before they actually break. The developed analytical algorithms were realized on a cloud server, and was made accessible via the Internet and on mobile devices.[80]

Integration of sensing and actuation systems, connected to the Internet, is likely to optimize energy consumption as a whole.[49] It is expected that IoT devices will be integrated into all forms of energy consuming devices (switches, power outlets, bulbs, televisions, etc.) and be able to communicate with the utility supply company in order to effectively balance power generation and energy usage.[81] Such devices would also offer the opportunity for users to remotely control their devices, or centrally manage them via a cloud based interface, and enable advanced functions like scheduling (e.g., remotely powering on or off heating systems, controlling ovens, changing lighting conditions etc.).[49] In fact, a few systems that allow remote control of electric outlets are already available in the market, e.g., Belkin’s WeMo,[82] Ambery Remote Power Switch,[83] Budderfly,[84] Telkonet’s EcoGuard,[85] WhizNets Inc.,[86] etc.

Besides home based energy management, the IoT is especially relevant to the Smart Grid since it provides systems to gather and act on energy and power-related information in an automated fashion with the goal to improve the efficiency, reliability, economics, and sustainability of the production and distribution of electricity.[81] Using advanced metering infrastructure (AMI)devices connected to the Internet backbone, electric utilities can not only collect data from end-user connections, but also manage other distribution automation devices like transformers and reclosers.[49]

IoT devices can be used to enable remote health monitoring and emergency notification systems. These health monitoring devices can range from blood pressure and heart rate monitors to advanced devices capable of monitoring specialized implants, such as pacemakers, Fitbit electronic wristbands or advanced hearing aids.[49] Specialized sensors can also be equipped within living spaces to monitor the health and general well-being of senior citizens, while also ensuring that proper treatment is being administered and assisting people regain lost mobility via therapy as well.[87] Other consumer devices to encourage healthy living, such as, connected scales or wearable heart monitors, are also a possibility with the IoT.[88] More and more end-to-end health monitoring IoT platforms are coming up for antenatal and chronic patients, helping one manage health vitals and recurring medication requirements.[citation needed]

IoT devices can be used to monitor and control the mechanical, electrical and electronic systems used in various types of buildings (e.g., public and private, industrial, institutions, or residential)[49] in home automation and building automation systems. 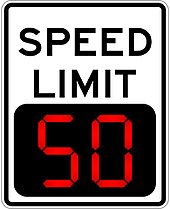 The IoT can assist in integration of communications, control, and information processing across various transportation systems. Application of the IoT extends to all aspects of transportation systems (i.e. the vehicle, the infrastructure, and the driver or user). Dynamic interaction between these components of a transport system enables inter and intra vehicular communication, smart traffic control, smart parking ,electronic toll collection systems, logistic and fleet management, vehicle control, and safety and road assistance.[49]

There are several planned or ongoing large-scale deployments of the IoT, to enable better management of cities and systems. For example, Songdo, South Korea, the first of its kind fully equipped and wired smart city, is near completion. Nearly everything in this city is planned to be wired, connected and turned into a constant stream of data that would be monitored and analyzed by an array of computers with little, or no human intervention.[citation needed]

Another application is a currently undergoing project in Santander, Spain. For this deployment, two approaches have been adopted. This city of 180,000 inhabitants, has already seen 18,000 city application downloads for their smartphones. This application is connected to 10,000 sensors that enable services like parking search, environmental monitoring, digital city agenda among others. City context information is used in this deployment so as to benefit merchants through a spark deals mechanism based on city behavior that aims at maximizing the impact of each notification.[89]

Other examples of large-scale deployments underway include the Sino-Singapore Guangzhou Knowledge City;[90] work on improving air and water quality, reducing noise pollution, and increasing transportation efficiency in San Jose, California;[91] and smart traffic management in western Singapore.[92] French company, Sigfox, commenced building an ultra-narrowband wireless data network in the San Francisco Bay Area in 2014, the first business to achieve such a deployment in the U.S.[93][94] It subsequently announced it would set up a total of 4000 base stations to cover a total of 30 cities in the U.S. by the end of the 2016, making it the largest IoT network coverage provider in the country thus far.[95][96]

Another example of a large deployment is the one completed by New York Waterways in New York City to connect all their vessels and being able to monitor them live 24/7. The network was designed and engineered by Fluidmesh Networks, a Chicago-based company developing wireless networks for critical applications. The NYWW network is currently providing coverage on the Hudson River, East River, and Upper New York Bay. With the wireless network in place, NY Waterway is able to take control of its fleet and passengers in a way that was not previously possible. New applications can include security, energy and fleet management, digital signage, public Wi-Fi, paperless ticketing and others.[97]