After studying this section you should be able to do the following:

Data refers simply to raw facts and figures. Alone it tells you nothing. The real goal is to turn data into information. Data becomes information when it’s presented in a context to answer a question or support decision making. When this information can be combined with a manager’s knowledge—their insight from experience and expertise—stronger, more relevant decisions can be made.

The ability to look critically at data and assess its validity is a vital managerial skill. When decision makers are presented with wrong data, the results can be disastrous. And these problems can get amplified if bad data is fed to automated systems. As an example, look at the series of man-made and computer-triggered events that brought about a billion-dollar collapse in United Airlines stock.

In the wee hours one Sunday morning in September 2008, a single reader browsing back stories on the Orlando Sentinel’s Web site viewed a 2002 article on the bankruptcy of United Airlines (UAL went bankrupt in 2002, but emerged from bankruptcy four years later). That lone Web surfer’s access of this story during such a low-traffic time was enough for the Sentinel’s Web server to briefly list the article as one of the paper’s “most popular.” Google crawled the site and picked up this “popular” news item, feeding it into Google News.

Early that morning, a worker in a Florida investment firm came across the Google-fed story, assumed United had yet again filed for bankruptcy, then posted a summary on Bloomberg. Investors scanning Bloomberg jumped on what looked like a reputable early warning of another United bankruptcy, dumping UAL stock. Blame the computers again—the rapid plunge from these early trades caused automatic sell systems to kick in (event-triggered, computer-automated trading is responsible for about 30 percent of all stock trades). Once the machines took over, UAL dropped like a rock, falling from twelve to three dollars. That drop represented the vanishing of $1 billion in wealth, and all this because no one checked the date on a news story. Welcome to the new world of paying attention (Harvey, 2008)!

Understanding How Data Is Organized: Key Terms and Technologies

A database is simply a list (or more likely, several related lists) of data. Most organizations have several databases—perhaps even hundreds or thousands. And these various databases might be focused on any combination of functional areas (sales, product returns, inventory, payroll), geographical regions, or business units. Many organizations create specialized databases for recording transactions, as well as databases that aggregate data from multiple sources in order to support reporting and analysis.

The acronym SQL (often pronounced sequel) also shows up a lot when talking about databases. Structured Query Language (SQL) is by far the most common language for creating and manipulating databases. You’ll find variants of SQL inhabiting everything from lowly desktop software, to high-powered enterprise products. Microsoft’s high-end database is even called SQL Server. And of course there’s also the open source MySQL (whose stewardship now sits with Oracle as part of the firm’s purchase of Sun Microsystems). Given this popularity, if you’re going to learn one language for database use, SQL’s a pretty good choice. And for a little inspiration, visit Monster.com or another job site and search for jobs mentioning SQL. You’ll find page after page of listings, suggesting that while database systems have been good for Ellison, learning more about them might be pretty good for you, too.

Even if you don’t become a database programmer or database administrator (DBA), you’re almost surely going to be called upon to dive in and use a database. You may even be asked to help identify your organization’s data requirements. It’s quite common for nontechnical employees to work on development teams with technical staff, defining business problems, outlining processes, setting requirements, and determining the kinds of data the firm will need to leverage. Database systems are powerful stuff, and can’t be avoided, so a bit of understanding will serve you well. 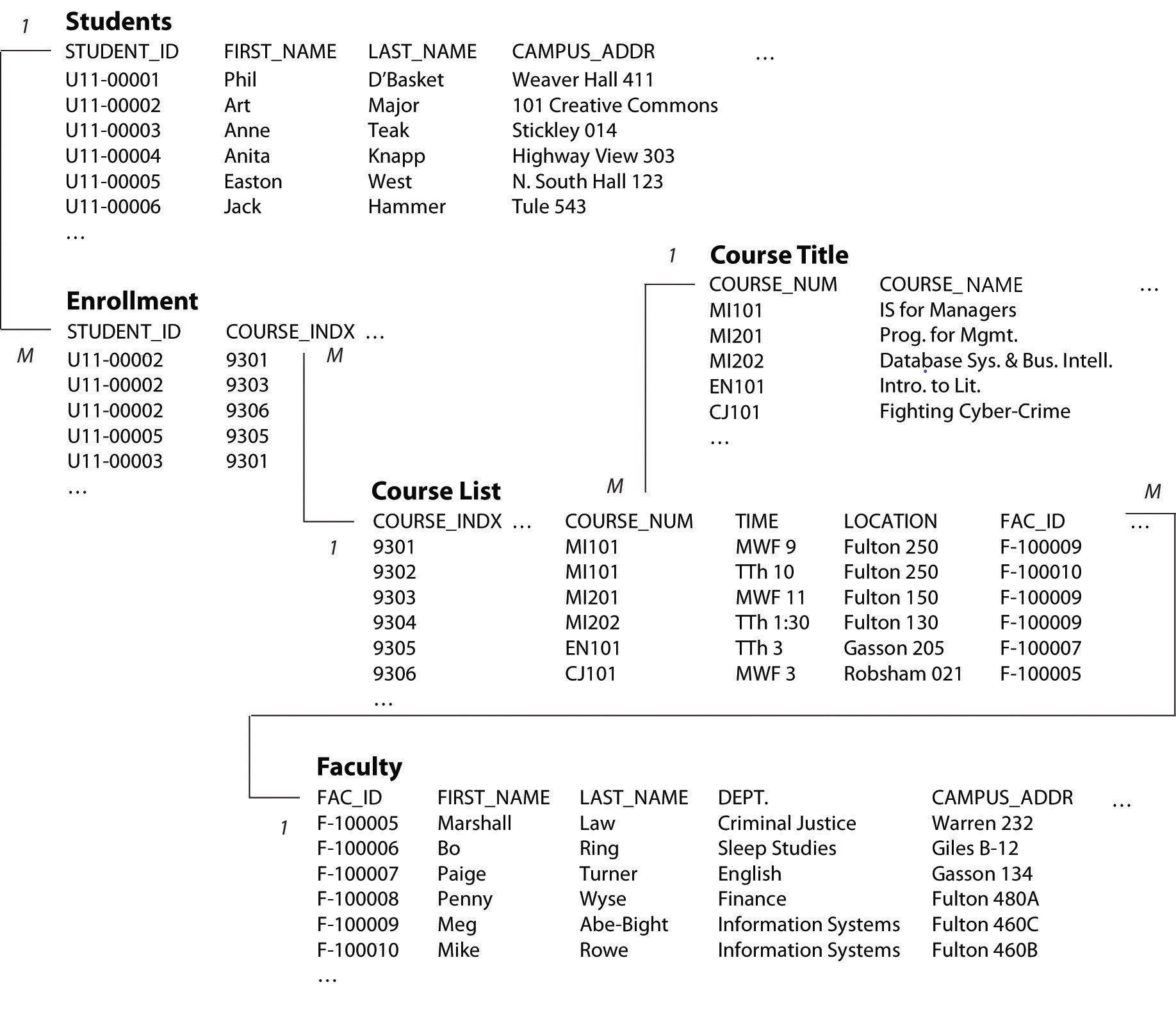 A complete discourse on technical concepts associated with database systems is beyond the scope of our managerial introduction, but here are some key concepts to help get you oriented, and that all managers should know.

We’ve just scratched the surface for a very basic introduction. Expect that a formal class in database systems will offer you far more detail and better design principles than are conveyed in the elementary example above. But you’re already well on your way!

Data, Information, and Knowledge by [Author removed at request of original publisher] is licensed under a Creative Commons Attribution-NonCommercial-ShareAlike 4.0 International License, except where otherwise noted.