You and I are bombarded with images and messages about food everywhere we go. We see super models eating giant burgers, chefs battling to prepare meals, and the top places to burst your belly from consuming breaded and fried chicken wings to deli sandwiches longer than a foot. There are also shows that feature bizarre foods from cultures around the world. How do you use the information from popular network food shows to build a nutritious meal? You don’t—these shows are for entertainment. The construction of a nutritious meal requires learning about which foods are healthy and which foods are not-so-healthy, how foods and nutrients function in your body, and how to use scientific resources to make healthful choices for you and those you care about. This text is designed to provide you with the information necessary to make sound nutritional choices that will optimize health and help prevent disease.

How do you fill your plate?

The word nutrition first appeared in 1551 and comes from the Latin word nutrire, meaning “to nourish.” Today, we define Nutritional science as the investigation of how an organism is nourished, and it incorporates the study of how nourishment affects personal health, population health, and planetary health. Nutritional science covers a wide spectrum of disciplines. As a result, nutritional scientists can specialize in particular aspects of nutrition such as biology, physiology, immunology, biochemistry, education, psychology, sustainability, and sociology.

Without adequate nutrition the human body does not function optimally, and severe nutritional inadequacy can lead to disease and even death. The typical American diet is lacking in many ways, from not containing the proper amounts of essential nutrients, to being too speedily consumed, to being only meagerly satisfying. The figure below depicts how American diets stack up compared to the current recommendations.

Your ability to wake up, to think clearly, to communicate, to gain knowledge, to go to work and earn a living, and to do all of the things that you like to do are dependent upon one factor—your health. Good health means you are able to function normally and work hard to achieve your goals in life. For the next few minutes, take some time to view snapshots of the insides of the refrigerators of American mechanics, doctors, school teachers, hunters, short-order cooks, college students, vegans, and more. Visit Mark Menjivar’s portrait exhibition, “You Are What You Eat”. Menjivar hopes these images will invoke new thoughts about, “How we care for our bodies. How we care for others. And how we care for the land.” As you look at these images think about your personal health, the health of your family and friends, and the health of this planet. These hopes encompass the inspirations for this book.

Many individuals promote themselves as being nutrition experts. We will explore how to determine fact from fiction as we continue to explore the topics presented in this course. If you are interested in meeting with a nutrition professional trained to provide evidence-based information, you will want to make an appointment with a Registered Dietitian Nutritionist. Dietitians are nutrition professionals who integrate their knowledge of nutritional science into helping people achieve a healthy diet and develop good dietary habits. The Academy of Nutrition and Dietetics (A.N.D.) is the largest organization of nutrition professionals worldwide and Registered Dietitian Nutritionists are committed to helping Americans eat well and live healthier lives. The A.N.D. website contains evidence-based nutritional advice, to learn more, visit EatRight.Org

Mark Menjivar has traveled around the United States taking photographs of the contents of refrigerators of numerous types of people. The portraits are available for viewing on his website under “You Are What You Eat.” 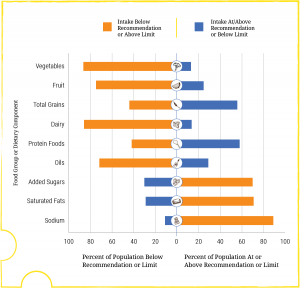 Figure 1.2.1 Percent of population below and above recommendations. most of the population is lacking in recommended servings of nutrient dense foods and is consuming in excess of the recommended limits for saturated fats, added sugars and sodium.

Nutrition and Health and Disease

In 1946, the World Health Organization (W.H.O.) defined health as “a state of complete physical, mental, and social well-being, and not merely the absence of disease or infirmity.” This definition was adopted into the W.H.O. constitution in 1948 and has not been amended since. A triangle is often used to depict the equal influences of physical, mental, and social well-being on health. Disease is defined as any abnormal condition affecting the health of an organism, and is characterized by specific signs and symptoms. Signs refer to identifying characteristics of a disease such as swelling, weight loss, or fever. Symptoms are the features of a disease recognized by a patient and/or their doctor. Symptoms can include nausea, fatigue, irritability, and pain. Diseases are broadly categorized as resulting from pathogens (i.e., bacteria, viruses, fungi, and parasites), deficiencies, genetics, and physiological dysfunction. Diseases that primarily affect physical health are those that impair body structure (as is the case with osteoporosis), or functioning (as is the case with cardiovascular disease). Mental illnesses primarily affect mental and social well-being.

The foods we eat affect all three aspects of our health. For example, a teen with Type 2 diabetes is first diagnosed by physical signs and symptoms such as increased urination, thirstiness, and unexplained weight loss. But research has also found that teens with Type 2 diabetes may have impaired thinking and may not interact well with others in school, thereby affecting mental and social well-being. Type 2 diabetes is just one example of a physiological disease that affects all aspects of health—physical, mental, and social.

In 1894, the first congressional funds were appropriated to the US Department of Agriculture (USDA) for the study of the relationship between nutrition and human health. Dr. Wilbur Olin Atwater was appointed as the Chief of Nutrition Investigations and is regarded as the “Father of Nutrition Science” in America. Under Dr. Atwater’s guidance, the USDA released the first bulletin to the American public that contained information on the amounts of fat, carbohydrates, proteins, and food energy in various foods. Nutritional science advanced considerably in these early years, but it took until 1980 for the USDA and the US Department of Health and Human Services (HHS) to jointly release the first edition of Nutrition and Your Health: Dietary Guidelines for Americans.

Although the wide distribution of the “Dietary Guidelines for Americans” did not come about until the 1980s, many historical events that demonstrated the importance of diet to health preceded their release. Assessments of the American diet in the 1930s led President Franklin D. Roosevelt to declare in the inaugural address on January 20, 1937, “I see one-third of our nation is ill-housed, ill-clad, and ill-nourished.” From the time of Atwater until the onset of the Great Depression, nutrition scientists had discovered many of the vitamins and minerals that are essential for the functioning of the human body. Their work and the acknowledgment by President FDR of the nutritional inadequacy of the American diet evoked a united response between scientists and government, leading to the enrichment of flour (adding vitamins and minerals lost in processing), the development of free or reduced-cost school lunch programs, and advancements of nutrition education in this country.

In the latter part of the twentieth-century nutrition scientists, public health organizations, and the American public increasingly recognized that eating too much of certain foods is linked to chronic diseases. We now know that diet-related conditions and diseases include: hypertension (high blood pressure), obesity, Type 2 diabetes, cardiovascular disease, some cancers, and osteoporosis. These diet-related conditions and diseases are some of the biggest killers of Americans. The United States Department of Health and Human Services (HHS) reports that unhealthy diets and inactivity cause between 310,000 and 580,000 deaths every single year. According to the United States Department of Agriculture (USDA), eating healthier could save Americans over $70 billion per year and this does not include the cost of obesity, which is estimated to cost a further $117 billion per year. Unfortunately, despite the fact that the prevalence of these diseases can be decreased by healthier diets and increased physical activity, the Center for Disease Control (CDC) reports that the federal government spends one thousand times more to treat a disease than to prevent it ($1,390 versus $1.21 per person each year). In 2015, the Dietary Guidelines for Americans identified obesity as the number one nutritional-related health problem in the United States and established strategies to combat its incidence and health consequences in the American population. A 2008 study in the journal Obesity reported that if current trends are not changed, 100 percent of Americans will be overweight or obese in 2048.1  In 2011, the US federal government released a multimedia tool that aims to help Americans choose healthier foods from the five food groups (grains, vegetables, fruits, dairy, and proteins). The tool, called “Choose MyPlate,” is available at choosemyplate.gov.