Check out this 3D view of the Amygdala 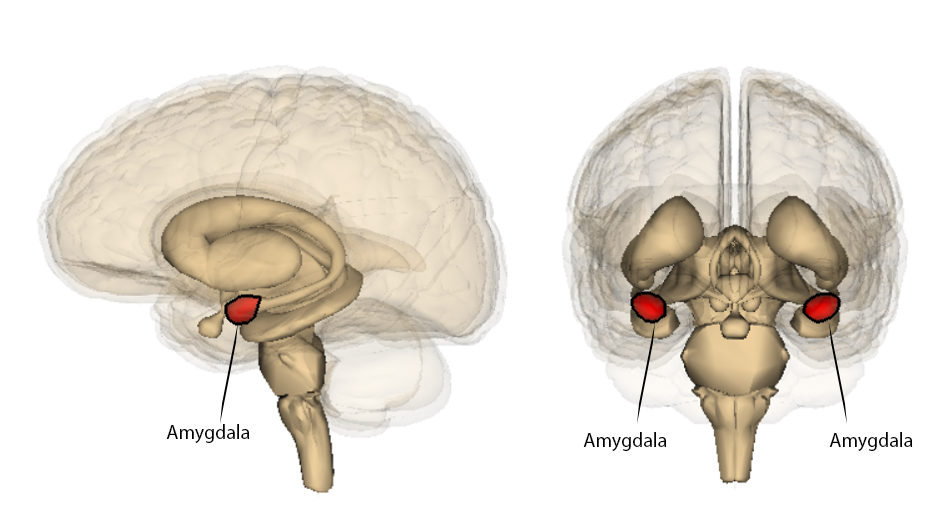 Lesion Studies
One way to evaluate the role of the amygdala in emotions is to conduct lesion studies. A lesion study investigates how damage in the amygdala effects people’s emotional experiences compared to a control group without damage. One way to conduct a lesion study would be to damage the amygdala in rats and assess how that impacts emotion. A second way would be to recruit humans who have damage to the amygdala. Klüver-Bucy Syndrome (Klüver & Bucy, 1939) describes a variety of symptoms associated with amygdala damage. Klüver-Bucy can be caused by stroke, encephalitis, tumors, and even a lobotomy. Typically, Klüver-Bucy is expressed when one or both amygdalae, and often parts of the temporal lobe, have been damaged. In 1939, Klüver and Bucy first described the symptoms after conducting bilateral temporal lobectomies in rhesus monkeys. After the lobectomy, monkeys showed odd oral behaviors such as sticking objects in their mouths that they typically do not. The monkeys showed hypersexual behaviors, such as efforts to mate with inanimate objects. A final symptom was that monkeys who were originally fearful and aggressive became placid when presented with fearful objects such as snakes. The removal of the amygdalae seemed to change emotional experiences such as reducing disgust elicited by placing harmful objects in the mouth, and lack of fear or aggression when presented with danger. These symptoms have been replicated with cats and even in humans. Humans who present with Klüver-Bucy show dampened emotions or even exaggerated rage and aggression. One thing to note is that Klüver-Bucy is often caused by damage to the amygdala and surrounding areas, thus any changes in emotions cannot be solely due to damage in the amygdala. Urbach-Weithe Disease is a rare genetic disorder caused by calcium build-up in the amygdala, which causes the brain tissue to harden. In Urbach-Weithe Disease, the damage typically only affects the amygdala – thus allowing researchers to link the symptoms to a specific structure in the brain. Urbach-Weithe symptoms are similar to Klüver-Bucy and include reduced fear, heightened aggression, and changes in the emotion of disgust.