In line with positive emotions, authentic pride is associated with several types of approach behavior. As stated earlier, experiencing authentic pride is rewarding and thus may motivate us to approach and success on future goals. When we experience pride due to a success, we approach our close others to tell them about our accomplishments (Tracy & Robins, 2007b). Further authentic pride leads to prosocial behaviors like helping others and selflessness (Hart & Matsuba, 2007; Michie, 2009), which can also be categorized as approach behaviors. Further, as mentioned above, authentic pride is associated with adaptive levels of the Big 5 traits – Extraversion, Agreeableness, Openness, Conscientiousness, and Emotional Stability, while hubristic pride is linked to low Agreeableness and low Conscientiousness (Tracy & Robins, 2007c).

Similarly, a loss of hubristic pride, such as when we fail or someone insults us, leads to approach behaviors, but these behaviors differ from authentic pride (Bushman & Baumeister, 1998; Tracy & Robins, 2007b). During loss of hubristic pride, people exhibit aggression and hostility toward others. These findings are in line with work on narcissism – which suggests that narcissists exhibit an over inflated sense of self not tied to specific accomplishments (i.e., hubristic pride) combined with an implicit low self-esteem. When narcissists receive negative feedback, they tend to aggress and lash out to re-establish their self-esteem (Baumeister et al., 2000; Tracy et al., 2009; Tracy & Robins, 2007b).

Tracy and Robins (2004b) found support for the existence of a distinct pride facial expression. In their first study, male and females posed expressions of happiness, surprise, and pride. Specifically, the pride expression included a smile, head tilt, expanded posture, and hands on hip or raised above the head. For each photo, participants identified the emotion from the following word labels: happiness, pride, surprise, and no emotion. With chance set at 33%, the majority of participants who selected the correct label are displayed in Table 4:

In their second study, participants were shown the same emotional expressions from Study 1, but this time asked to free label the emotion in the photograph. Then, the researchers used a 1-5 scale to rate whether the word participants provided was related to pride. For all 6 pride photos, pride-related words were provided at above-chance levels. On average, a majority (64%) of the participants stated a pride word.

Finally, study three investigated different types of facial expressions and which bodily changes were most indicative of the emotion pride. This study included four independent variables, and one dependent variable, outlined in the boxes below.

Findings demonstrated that two facial expressions resulted in the most participants selecting the pride label. The first finding investigated the photos that received the highest numbers of correct pride labels. For photo A, 74% of these photos were identified as pride and 77% of photo B expressions were identified as pride. Looking at the majority of participants who correctly judged the photo, again photos A and B resulted in the greatest number of participants who selected the correct photo. Taken together, these findings suggest the expressions in photos A and B are the best examples of a universal facial expression. Thus, viewing the entire body, a small smile, and a small head 15° tilt are unique expressions for pride. And it doesn’t matter whether the arms are raised above our head or placed on our hips.

So, we know that unique facial expressions are easily identified by Americans, but what about universality? One way to test for universality is to assess whether children can differentiate pride facial expressions from similar positive emotions. In one study (Tracy et al., 2005), children between ages 3 and 7 years old were shown three photographs of the same male and female. In these photos, the male and female were posing facial/bodily changes (all viewed from the waist-up) representative of three positive emotions. The emotions in the photos displayed pride, happiness, and surprise. The two pride photos were the same that were identified as most easily identified in the previous study. Child participants were instructed to point to the photos that represented each of the three emotions and to indicate if they did not see a photo that matched the verbalized emotion. In addition to asking participants to identify pride, happiness, and surprise, the researchers also asked them to identify other emotions not shown in the photos, such as love. Figure 2 displays the recognition rates for each emotion. Collapsed across all age groups participants correctly identified 59% of the pride photos (significantly greater than the chance of 33%). Replicating past research, neither of the two pride photos showed significantly higher recognition rates. The authors do state that when children selected the wrong pride photo, they tended to select happiness more often than surprise. 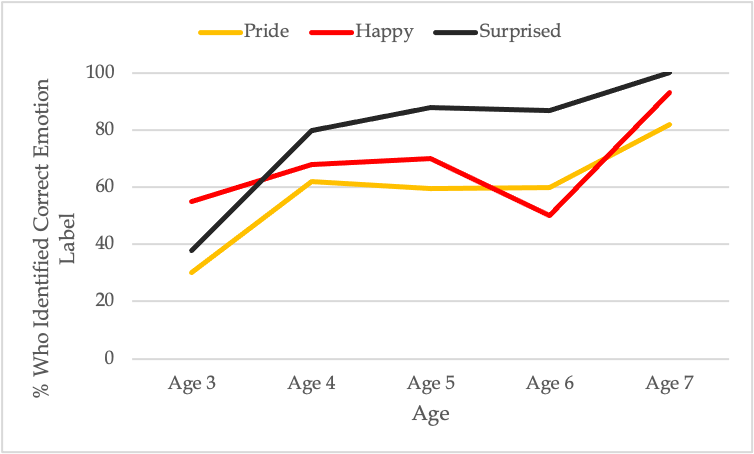 Next researchers sought to determine at which age children successfully recognize pride. Statistical analyses revealed that age 3 the recognition rate is around 30%, thus not meeting the 33% chance. By age 4, the recognition rate is greater than 33% chance (around 65%) and this recognition rate remains stable as children age. Said another way, recognition rates are significantly different for only the period of age 3 compared to age 7. Comparing recognition rates across emotions could provide further evidence that pride is a basic emotion, similar to surprise and happiness. Collapsed across all age groups, pride and happiness showed the same recognition rates, with surprise showing a significantly higher recognition rate. Further, children showed higher recognition for surprise than for pride only at age 5. Another study found that as early as 2 months show pleasure for mother’s praise for his/her achievement (Reissland & Harris, 1991).
Tracy and colleagues (2004b, 2005, 2007a, 2008) obtained evidence for universality. Their studies show that children from the USA, Italian adults, and adults from an isolated village in Burkinabe (West Africa) identified pride facial expressions at beyond chance levels. In this study, participants were shown four different pride photos – two of these were the most recognized photos from the last study (photos A and B) as well as surprise and happiness photos. 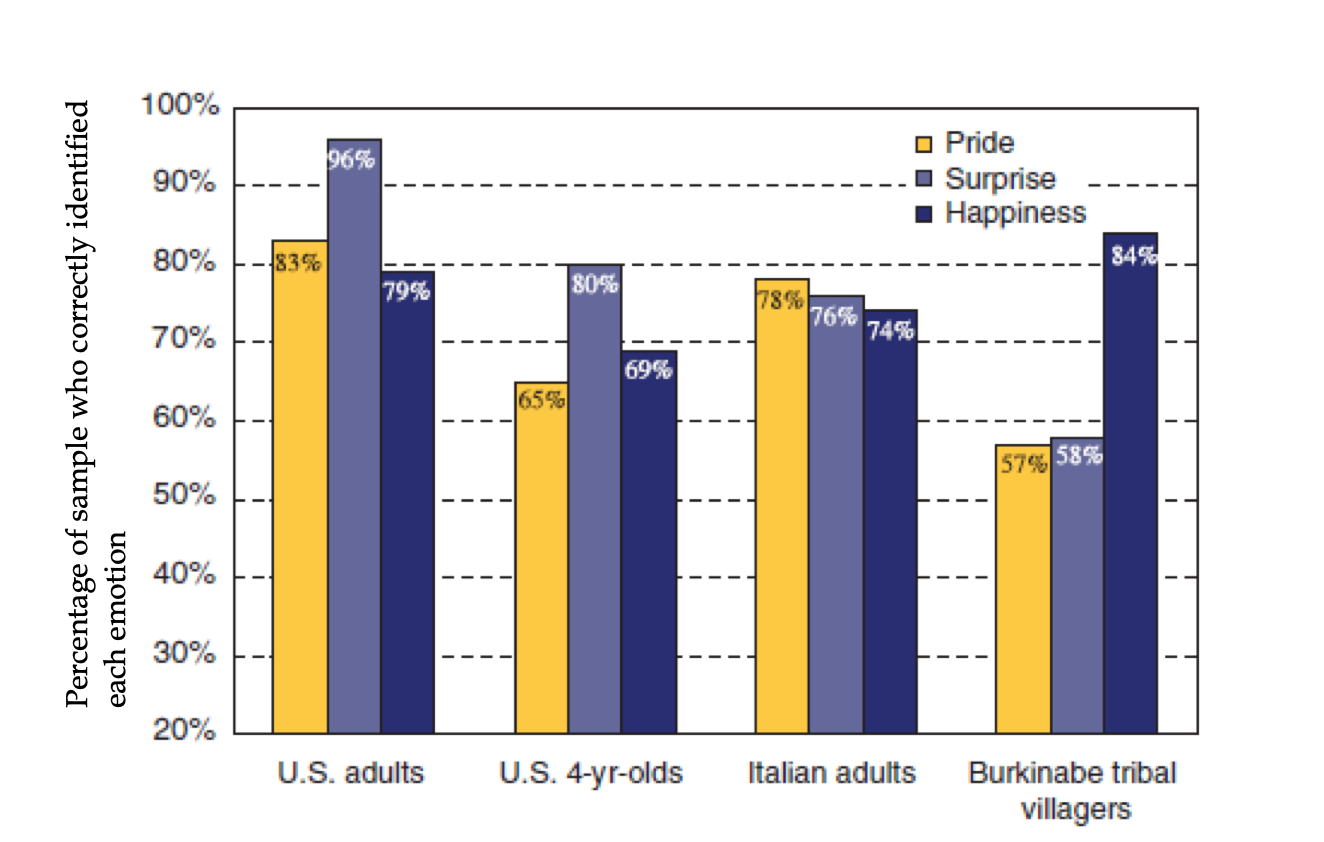 Additional work has found that children show and understand pride. Children first express pride by age 3 years old (Belsky & Domitrovich, 1997; Lewis et al., 1992; Stipek et al., 1992), after they have achieved self-awareness. Children recognize pride facial expression by age 4 (Tracy et al., 2004b) and understand concept of pride by ages 7-9. Developmentally pride differs from other basic emotions which are present in the first two to six months of life (Lewis, 2000; Reissland & Harris, 1991; Stipek et al., 1992). Self-awareness via the mirror-rouge test suggests that children do not differentiate between the self and others until around 18 to 24 months (Lewis, 2000; Lewis & Brooks-Gunn, 1979; Mascolo & Fischer, 1995; Stipek et al., 1992). But, some researchers believe self-recognition is not enough to experience pride and other self-conscious emotions. Some work suggests children cannot experience pride until they have the cognitive complexity to make conscious internal attributions of globality and stability, which may not occur until 2.5 to 3 years old (Mascolo & Fischer, 1995; Stipek et al., 1992).But other researchers believe pride is present before age 2. First, some evidence suggests self-recognition occurs as early as 2 months old (Rochat & Striano, 2002), suggesting pride could occur this early as well. In one study (Stipek, 1992), children of various ages (x-axis) were given the opportunity to achieve a task in the lab. The dependent variable, experience of achievement, is measured simply as whether or not the child looks up and toward mom or dad after achieving task. Findings in Figure 4 show that about 39% of children expressed pride before age 2 (24 months), while most children do express pride by year 2. These findings do suggest that pride may be expressed earlier than we thought – providing some confirmation for evolutionary theory. 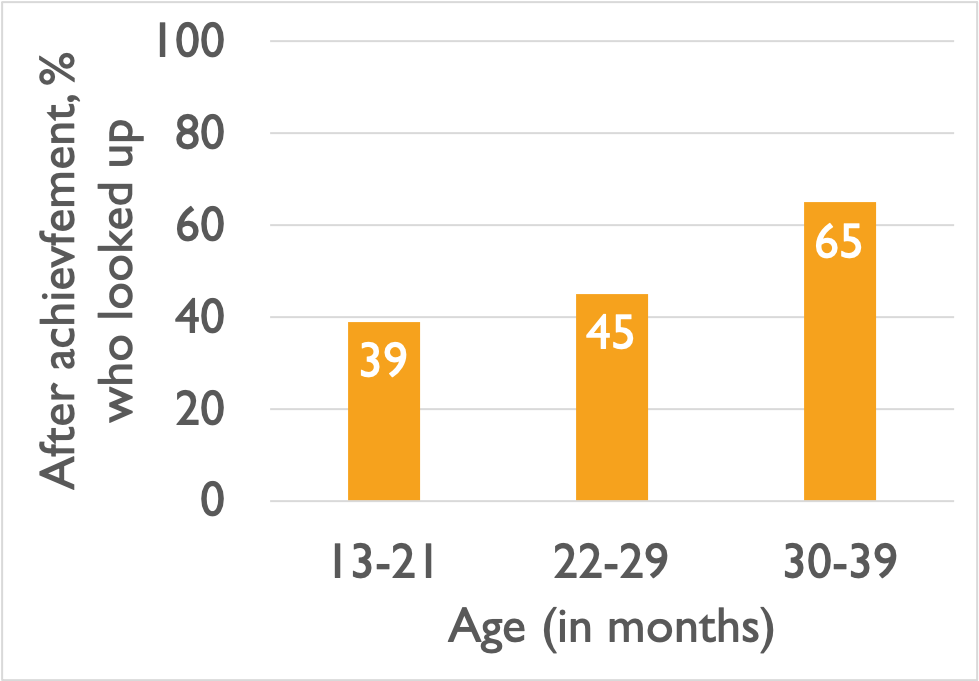 Table 5 displays Sauter et al.’s (2010) study (review here ) emotional story and corresponding vocal sound for authentic pride. Recall that in this study Himba and English participants listened to the vocal sound from a Himba voice and an English voice.

Findings are displayed in Figures 5 and 6. Looking at Figure 5, when participants listened to a voice from their own culture, both Himba and English participants matched sound to story at beyond chance levels. But, when we go to across cultures, Himba do not select the correct sound at beyond chance levels. These findings suggests that the Himba performed better when they listened to cheers from their own culture. 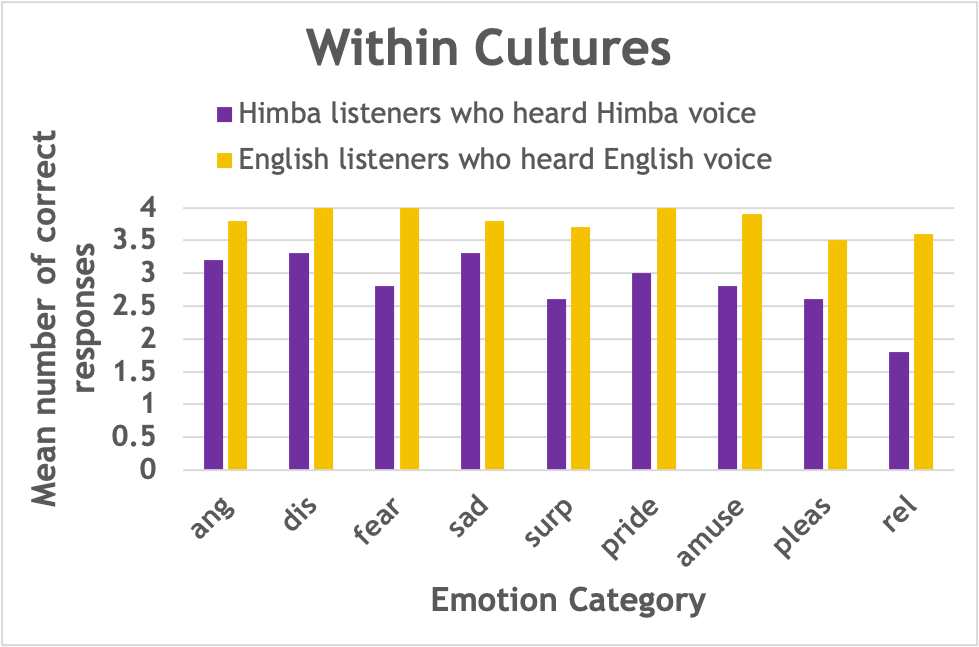 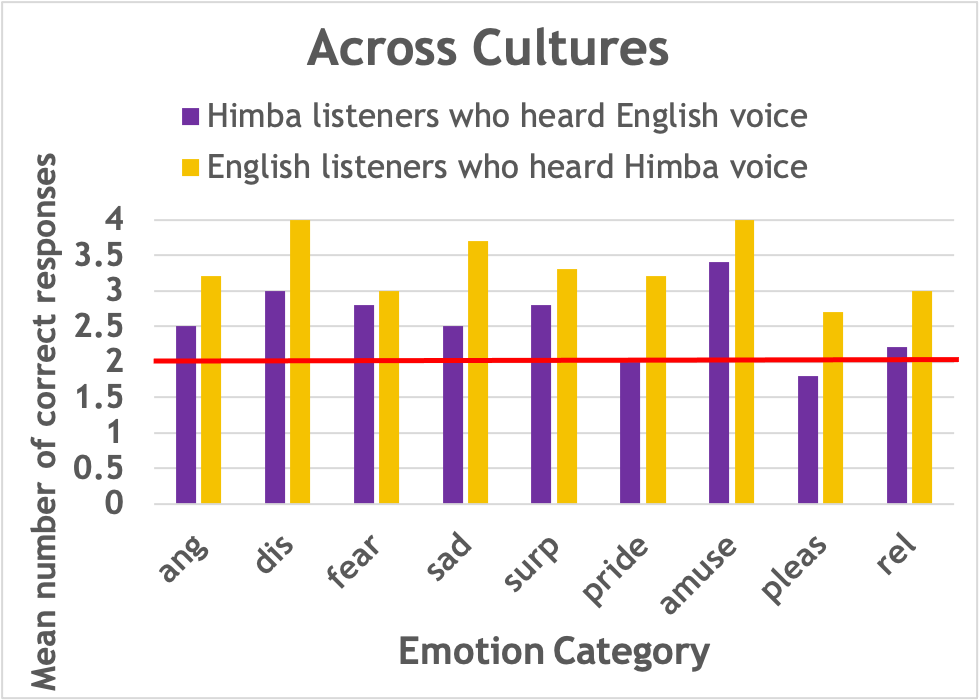 In Cordaro, Keltner, and colleagues’ (2016) study on vocal change (review here), participants matched the same above story about triumph to a vocal sound. The story was “S/he has just won a very challenging competition and feel triumphant” (Cordaro et al., 2016, Table 3, p. 121). The correct vocal sound for triumph “woo-hoo.” All countries, including Bhutan, matched the vocal sound to the triumph stories at beyond chance levels.  The lowest recognition rates were obtained in the US (85.5%) and in Bhutan (about 45%).

Gendron, Barrett et al. (2014a) (review study  here), used the “woo hoo” sound to represent triumph (i.e., achievement). Remember in this study, participants heard the sound and then free-labeled the emotion.  Then, researchers coded the free label into an emotion category.  Findings in Figure 7 show that a small portion of US participants provided a pride-related word for the “woo-hoo” sound and none of the Himba did.  Now, a large group of Himba and US participants did indicate the valence of the “woo hoo” sound was positive (see Figure 8), supporting some constructivist views that emotions are simply a range of valence of arousal.  Results showed that Himba participants free label responses for “woo hoo” were either non-emotion related or related to the emotion amusement. 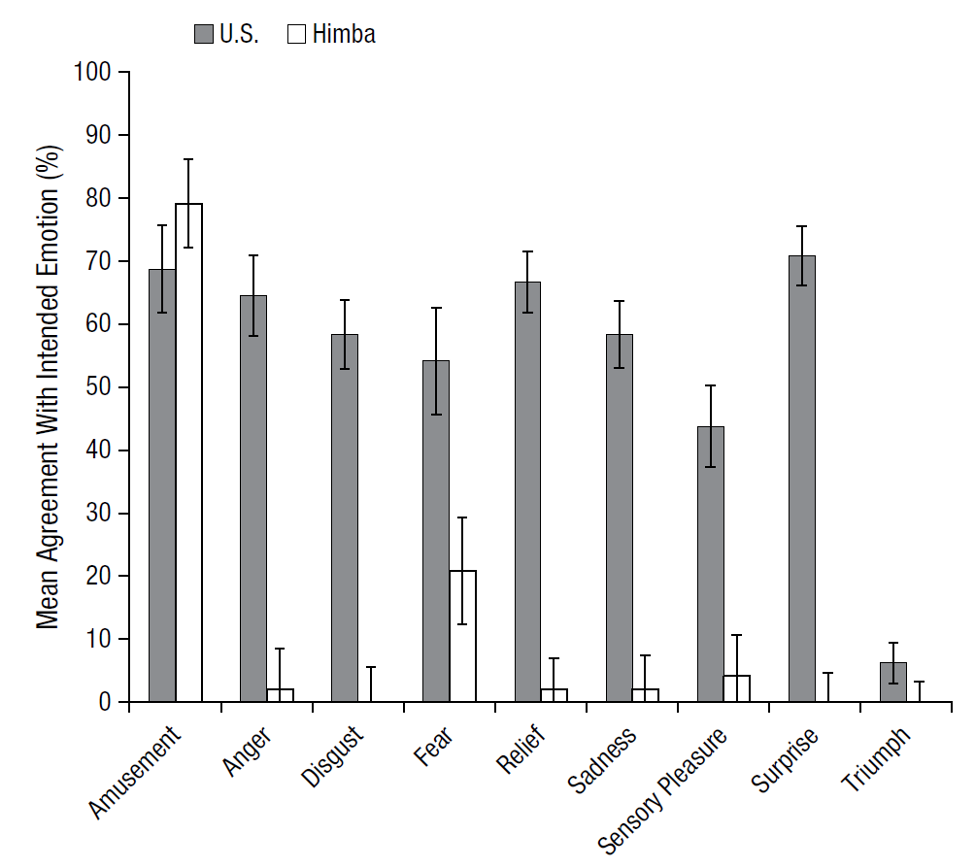 Figure 8
Self-Reported Valence of Each Emotion 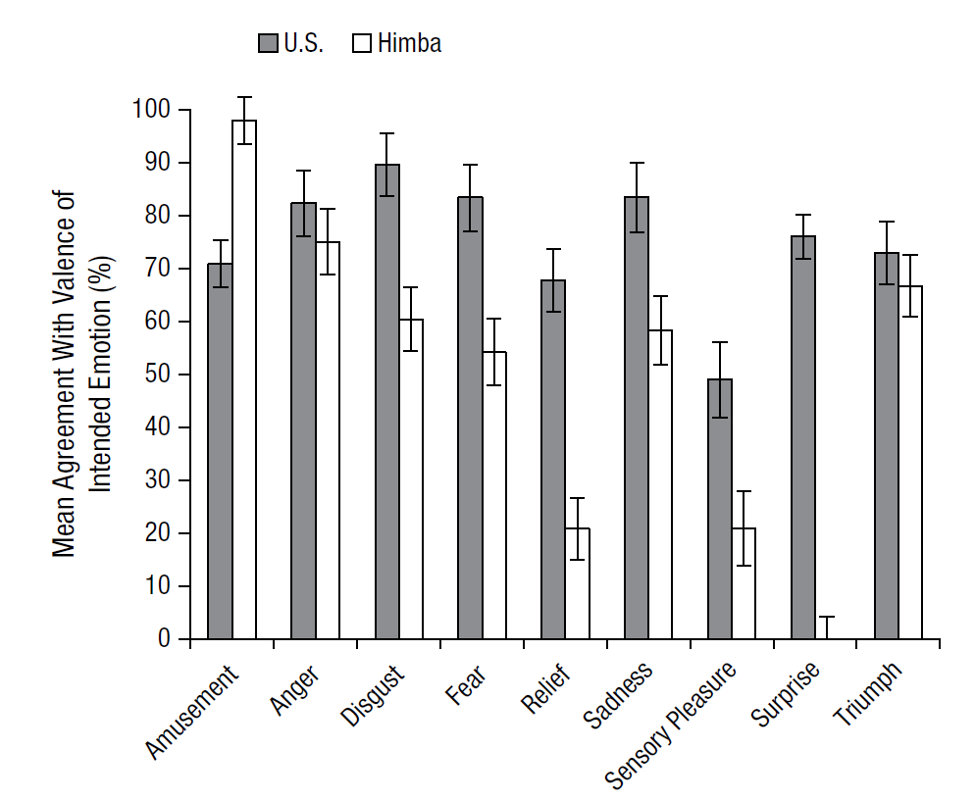