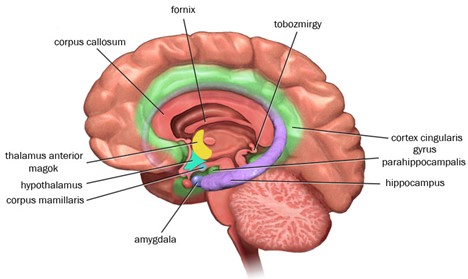 In another study (Kalin & Shelton, 2000), young rhesus monkeys were exposed to three conditions and their behavioral responses were evaluated. Figure 8 shows drawing of these conditions. It is important to note that the monkeys were separated from their mothers, which elicits distress. After separation from the mother, the young monkeys were placed in a cage and experienced each condition for a three- to nine-minute period. In the first alone condition, the monkeys were left alone. In the alone condition, normal behavior included increased bodily movement and cooing, which the researchers believe is similar to crying to help the mother locate the infant monkey. In the second condition, the monkeys saw the profile of a human intruder, but the intruder never made direct eye contact with the monkeys. During this no-eye-contact profile condition, typically monkeys reduced cooing and increased freezing and/or hiding behavior. In the third condition, a human intruder stared at and made eye contact with the monkey. In this stare condition, the monkey either exhibited aggressive behavior (e.g., barking, shaking, and approaching/lunging) or submissive behaviors, labeled “lip smacking and fear-grimacing” (p. 52). Typically, monkeys showed more freezing behavior during the profile condition than the two other conditions. Out of 100 monkeys, three monkeys showed context-inappropriate responding – which occurs when the behavior changes do not match the context of the emotional event or when the behavior changes last long after the emotional event has ended. These 3 monkeys showed context-inappropriate responding by exhibiting freezing, not aggressive, behaviors in the stare condition. Further results showed these three monkeys had greater activation in the right cortex and elevated cortisol levels, changes associated with the emotion fear. How does this relate to the hippocampus? Well, researchers (Davidson et al., 2000; Kalin and Shelton, 2000) believe that the hippocampus helps us to switch our emotions based on changing situations – such as the situation changing from the profile to stare conditions for the monkeys. Monkeys with abnormally functioning hippocampi may have more trouble adjusting behaviors to new contexts. Further, increased cortisol may be associated with hippocampus abnormalities and the tendency to experience fear. It is important to note that Kalin and Shelton (2000) and others are theorizing that the hippocampus damage or size could be one explanation of context-inappropriate responding (which is a symptom of depression and anxiety disorders).