Backward masking occurs when a visual stimulus is shown and quickly followed by another visual stimulus that MASKS the first stimulus. Typically, the masked image is similar to the feared stimulus in color and texture, but the mask does not contain an image or object. Backward masking allows researchers to assess people’s emotional experience at an unconscious level. The idea is that the first stimulus presented is shown so quickly that participants cannot process the first image consciously (although their brain nonconsciously evaluates the image). During the procedure, participants’ physiology can be measured and during or after the masking participants can self-report their subjective feelings and cognitive appraisals. During backward masking, participants might report they did not see an image, but this image could still impact their self-reported valence/arousal and physiology. Figure 7 shows an example of the methodology for backward masking. 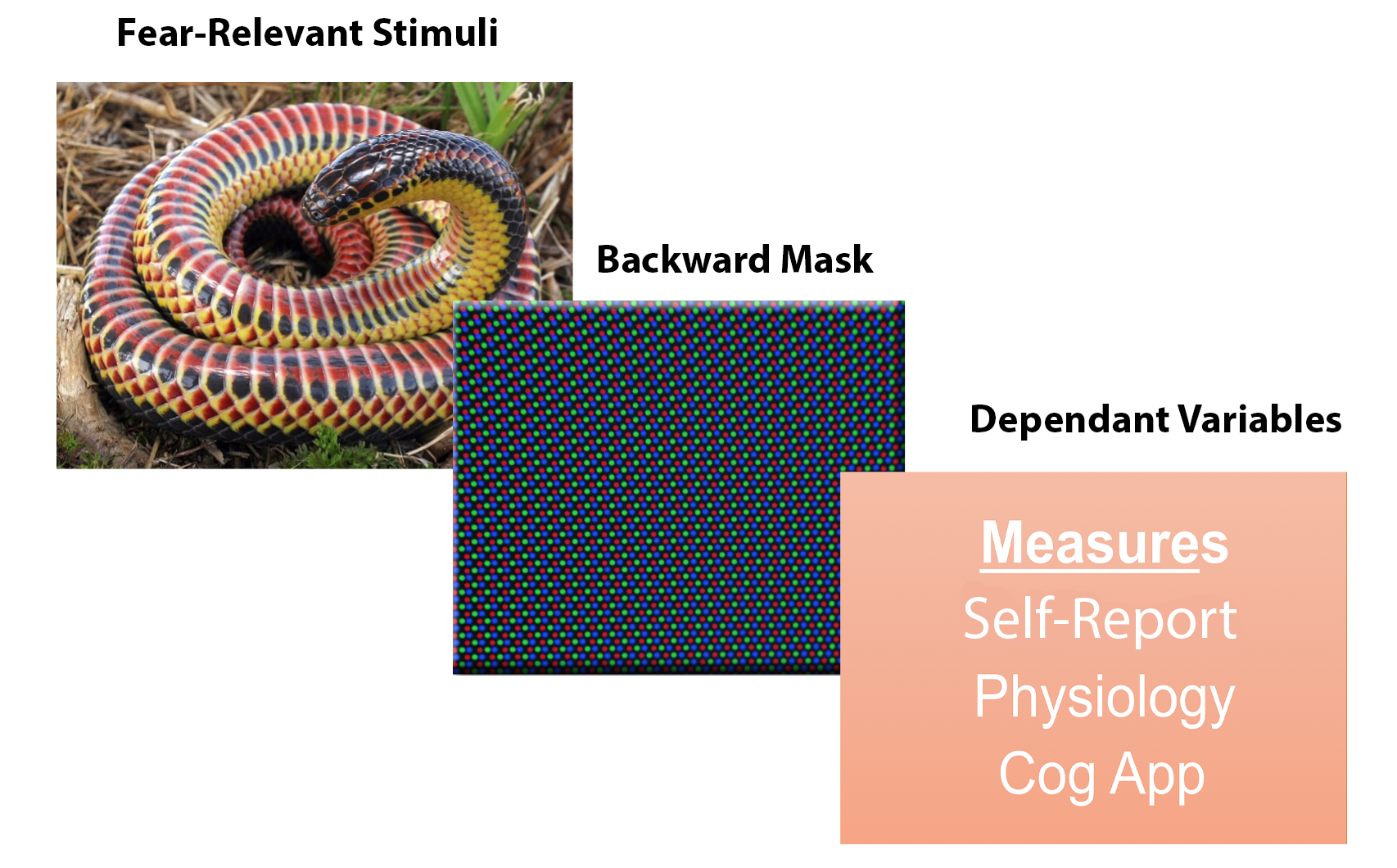 One study (Öhman & Soares, 1994) investigated fear with a backward masking procedure. The between-subjects quasi-IV was whether participants self-reported extreme fears of only snakes, only spiders, or neither (control). Within-subjects variables were target of photo (snakes, spiders, mushrooms, flowers), phase of image presentation (masked vs. unmasked) and number of trials (8 total trials). During each of the masked and unmasked phases, participants completed 8 viewing trials of each photo. So, participants viewed 8 masked photos of snakes, 8 masked photos of spiders, and so on. The dependent variables were skin conductance (a pure measures of SNS activity), and self-reported valence, arousal, and dominance on the Self-Assessment Mannikin (SAM; Bradley & Lang, 1994). While viewing these photos, skin conductance was measured. In the masked phases, the target photos were shown for 30 milliseconds, then followed by the mask for a period of 100 milliseconds. In the unmasked phases, the images were shown for 130 milliseconds. After completion of each of the masked and unmasked phases, participants were shown the four images again (masked or unmasked based on phase just completed) from the prior phase and reported the following: 1) image they saw in the photo, and 2) self-reported arousal, valence, and control-dominance to each picture. (Control-dominance could be considered a cognitive appraisal, similar to perceptions of control). Overall, most participants could not consciously identify the masked image (demonstrating the mask worked), while most could identify the unmasked image. 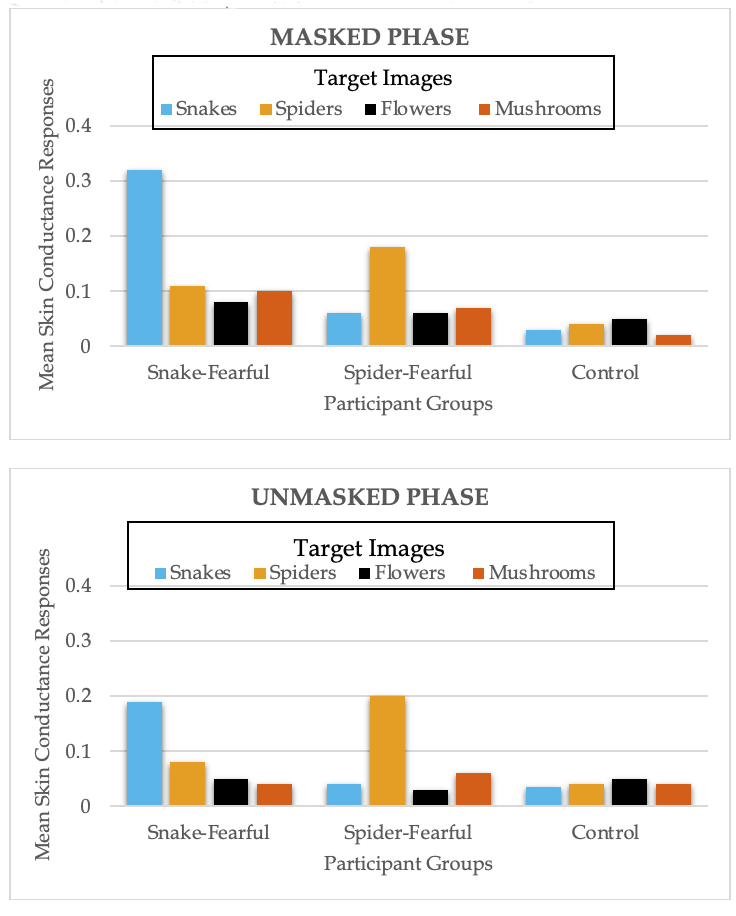 Findings for self-reported responses (see Figure 9) were similar to those for skin conductance. Snake-fearful participants reported greater arousal, unpleasantness, and lack of control to only the snake photos (versus other two groups), while spider-fearful participants showed greater levels when viewing spider photos (compared to other two groups). These findings held for both masked and unmasked phases, although scores were usually higher in unmasked conditions. These self-reported findings parallel the skin conductance findings and suggest that a threatening stimulus processed at the preattentive level can impact people’s self-reported subjective feelings and appraisals, even though the threatening stimuli has not yet entered conscious awareness. 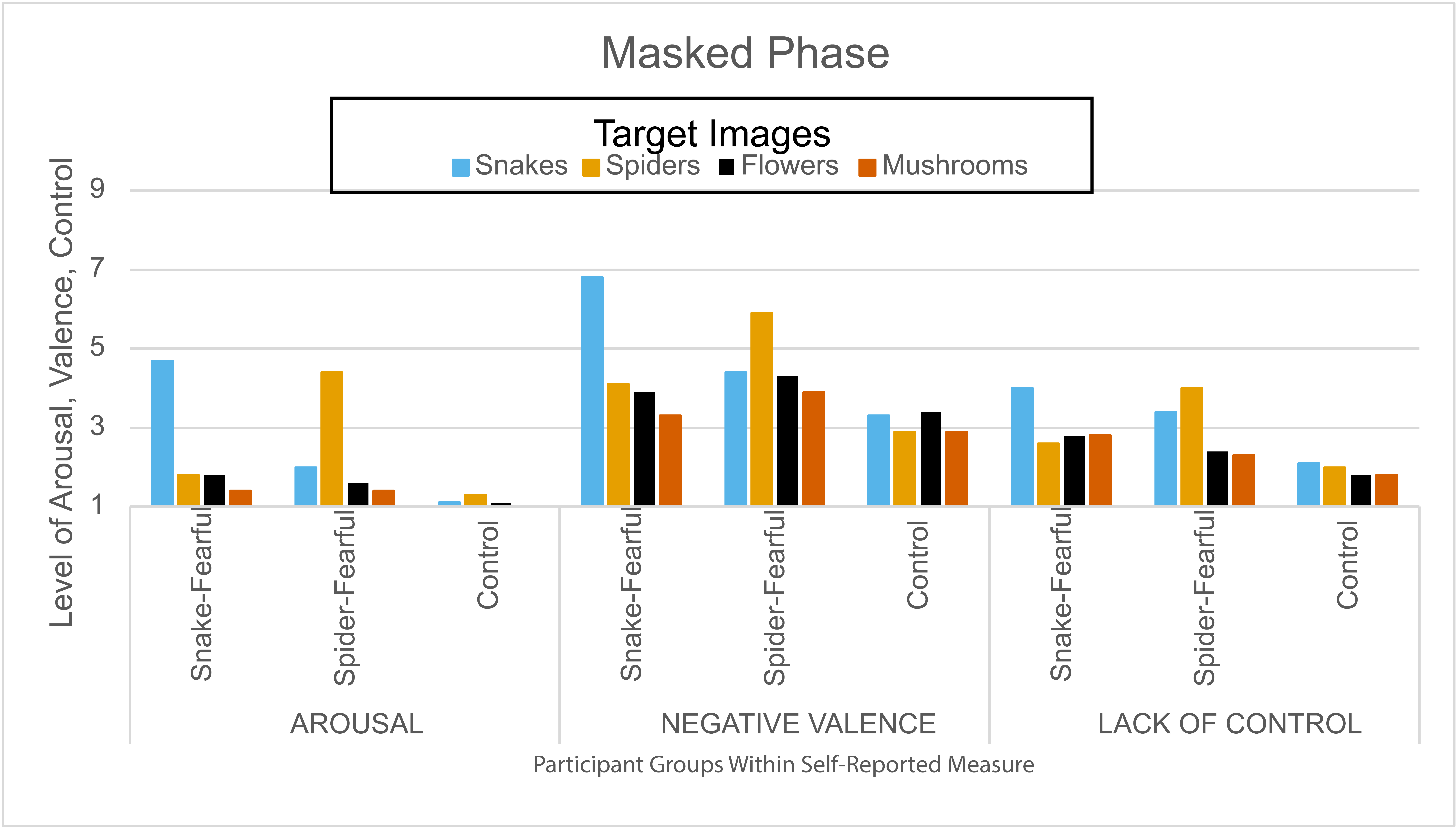 These findings show that when people are exposed to stimuli they already fear at a nonconscious level, they experience changes in physiology, subjective feelings, and cognitive appraisals. These findings further suggest that everyone does not universally experience fear to the same objects, which might contradict evolutionary theory. Current thought is that everyone has an evolutionary adaptation that prepares them to acquire fears to certain eliciting events, but the fears we acquire are going to depend on a combination of our genetics and past experiences with the threat. This view would suggest that people are not born with fears of snakes and spiders, but that we are born the with capacity to learn to fear certain events.

Further work supports the idea that the brain preattentively processes threatening stimuli. Patients with V1 or occipital lobe lesions experience a condition called blindsight. Blindsight occurs when a person does not consciously see a stimulus in their blind spot but can still identify the location and provide some information about the image. Patients with blindsight and complete blindness due to occipital lobe damage have shown greater right amygdala activation to fearful facial expressions compared to neutral expressions (Morris et al., 2001; Pegna et al., 2005). These findings provide further support to the idea that the amygdala can unconsciously process threatening stimuli, even though we cannot consciously see and process the stimuli.