Beyond cultural differences in self-reported mixed emotions, some evidence shows that people in different cultures experience different types of emotions. Socially disengaged emotions (sometimes called ego-focused emotions) are elicited by events directly related to the self (e.g., pride and anger). Conversely, socially engaged emotions (sometimes called other-focused emotions) are elicited by events related to others or to our relationships with other people (e.g., shame, love, vicarious pride, and embarrassment).

To test cultural differences in these emotions, Kitayama, Mesquita, and Karasawa (2006) recruited Japanese and American participants. At the end of each day for 14 days, participants recalled the “most emotional episode of the day” (Kitayama et al., 2004, p. 893). Then, each day, participants reported how strongly they experienced 27 different emotions during that emotional episode (Table 13 shows examples of these emotions). These 27 emotions were categorized into categories based on whether they are positive/negative and disengaging/engaging. 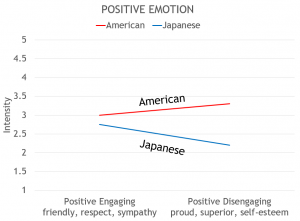 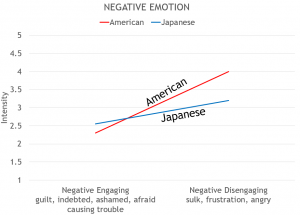 These findings suggest that across a two-week period, American participants (vs. Japanese participants) reported greater intensity for emotions tied directly to the self, a clear cross-cultural finding! But, American and Japanese participants did not report differences in intensity for engaging emotions – a universal finding! Comparing emotions within a culture does provide more evidence for cross-cultural differences – such that Americans experienced their disengaging emotions more intensely, whereas those from Japan experience their engaging emotions more intensely. Of course, one limitation is the emotion friendliness. Friendliness seems to be more representative of another construct – a personality trait!

Another way subjective feelings can be categorized is as powerful emotions or powerless emotions.  Powerful emotions are emotions that display one’s own status and power. Powerless emotions are those emotions that occur when we blame the self and report low perceived ability to cope. A study (Fischer, Mosquera, & van Vianen, 2004) investigated how gender and culture influenced participants’ subjective feelings. Men and women from 37 different countries were recruited. Some participants were from cultures with a high GEM (Gender Empowerment Measure, a construct used to measure gender equality in a given country), whereas other participants were from low GEM cultures. Countries were assigned a high GEM score if the country had equal division of the sexes and if women were heavily involved in positions of power, such as politics, economics, and the workplace. Low GEM countries were those in which men held more power than women. Participants were instructed to recall a time they felt six different emotions, and then to rate the emotion along two dependent variables: 1) self-reported intensity of emotion and 2) presence/absence of anger or crying facial expressions.  The two powerful emotions, typical of the male gender role, were anger and disgust. The powerless emotions, typical of the female gender role, were fear, sadness, shame, and guilt.