Core disgust is the original evolutionary defense caused by bad tasting and physically harmful objects that enter the mouth.  Core disgust is “the revulsion at prospect of oral incorporation of an offensive object” (Rozin & Fallon, 1987, p. 23).  Let’s break down this definition.  Oral incorporation means the offensive object is consumed through the mouth.  In fact, they believe that disgust first developed as a defense against eating deadly foods or eating foods that could be contaminated by other animals and body products.  With the word “prospect”, they highlight that core disgust may elicited by actually placing an offensive object in the mouth OR by thinking about an offensive object being placed in one’s mouth.  An offensive object is any object that is contaminated or has touched a contaminated object.  Core disgust is elicited by objects that are distasteful AND dangerous.  This means we do not experience core disgust when we eat something that tastes bad or feels funny but is not dangerous.  For example, some people HATE the taste of cilantro, but eating cilantro will not harm them.  My son refuses to eat apple sauce because of the texture – again not core disgust!  Second, core disgust is not just harm to the body.  Threats to physical harm without a bad taste would most likely elicit fear or anger.   Third, core disgust should be a universal emotion.  Thus, any cultural differences in food that elicit distaste would not be considered core disgust.  For instance, when studying abroad in Paris I was served a crab in a champagne glass!  When receiving the champagne glass I was definitely surprised and “grossed out,” but this disgust is caused by cultural expectations of food appropriateness, not by potential physical harm.

Threat of Oral Incorporation in the Self

This appraisal occurs because we perceive an offensive entity as entering the mouth to be more disgusting and harmful than an offensive entity entering though other parts of the body (i.e., skin, eyes, nose).  Thus, we will experience the greatest aversion to offensive objects entering the mouth than to other parts of the body.  Why? Well researchers believe the mouth is a boundary between the self and objects outside the self. This means, anything offensive we consume through the mouth could be incorporated or become part of the self.  In essence, the appraisal is “you are what you eat” and represents the perception that we take on the offensive and immoral properties of any offensive objects we eat.  Thus, when we consume an offensive object, we make an internal attribution that we are now disgusting.  Similarly, when we view others consuming offensive objects we make an external attribution – and conclude they are disgusting and offensive people. How would this play out in real life?  Well, in Madagascar a law prevented soldiers from eating hedgehogs because the government feared if soldiers ate hedgehogs the soldiers would exhibit the traits of the hedgehog!  What are traits of a hedgehog?  Well, hedgehogs tend to become timid and hide when they are in danger – qualities that we would not want in soldiers who defend! Other historical examples reference that in wartime, soldiers would eat the flesh of superior armies to take on the personality traits of “strength and courage.” The Aztecs are one group who engaged in exocannibalism, which means to consume the flesh of humans who are not included in one’s close social group. As if we don’t have enough examples, the Chijon gang, a South Korean gang, would eat the flesh of wealthy individuals to gain a higher status for the self.

Offensiveness is an appraisal that occurs when we view aversion to eating animals or to eating the bodily products of any animal, including humans (Rozin et al., 2008).  Examples of body products include feces, urine, blood, and vomit.  The offensiveness appraisal occurs when people think about eating most animals and the body products of animals.  Again, this emphasizes that we do not need to actually eat the animal or body products, but that we experience core disgust when we think about doing so.  Researchers point out that offensiveness is supported by the fact that most cultures eat a small subset of animals and that cultures have taboos on the type of food to eat.  Some food taboos:

When eating other animals, cultures even utilize certain methods to prevent the appraisal of offensiveness.  This includes changing the names for animal foods (e.g., ham, steak, pork instead of pig, cow, pig). In addition, we plate or present the food in a more appealing way and remove certain body parts like skin and heads.  These methods may be attempts for humans to reduce core disgust reactions by avoiding thoughts about the true animal they are consuming.  For example, look at the two photos below.  Which would you be more likely to eat?  Which elicits more disgust?  The first would elicit thoughts of offensiveness in many people and cause core disgust.  I say in many people because some people are very low in disgust sensitivity.  Disgust sensitivity is a personality trait which suggests some people experience disgust to a lot of different objects (high disgust sensitivity), whereas people low in disgust sensitivity are rarely disgusted. 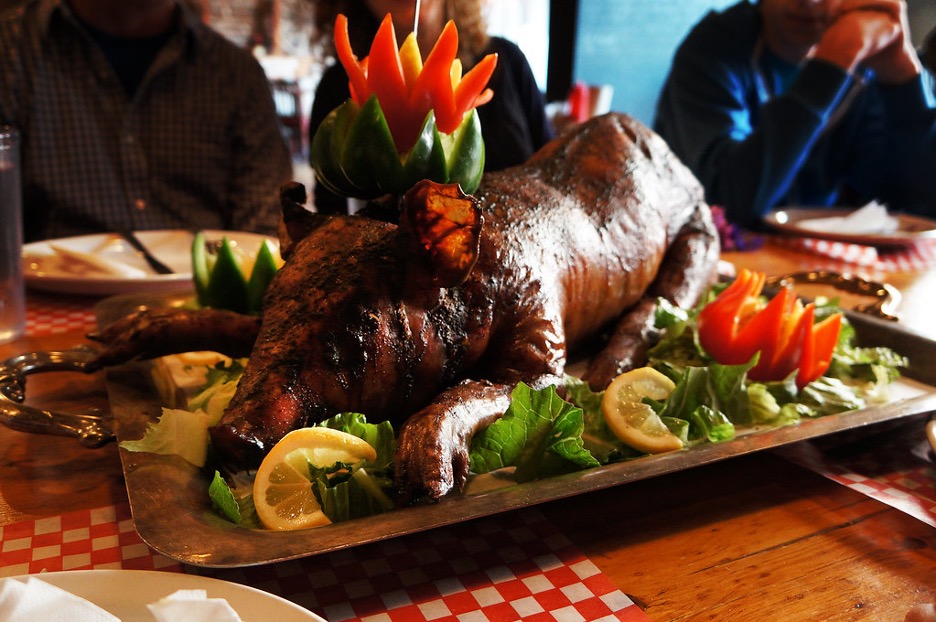 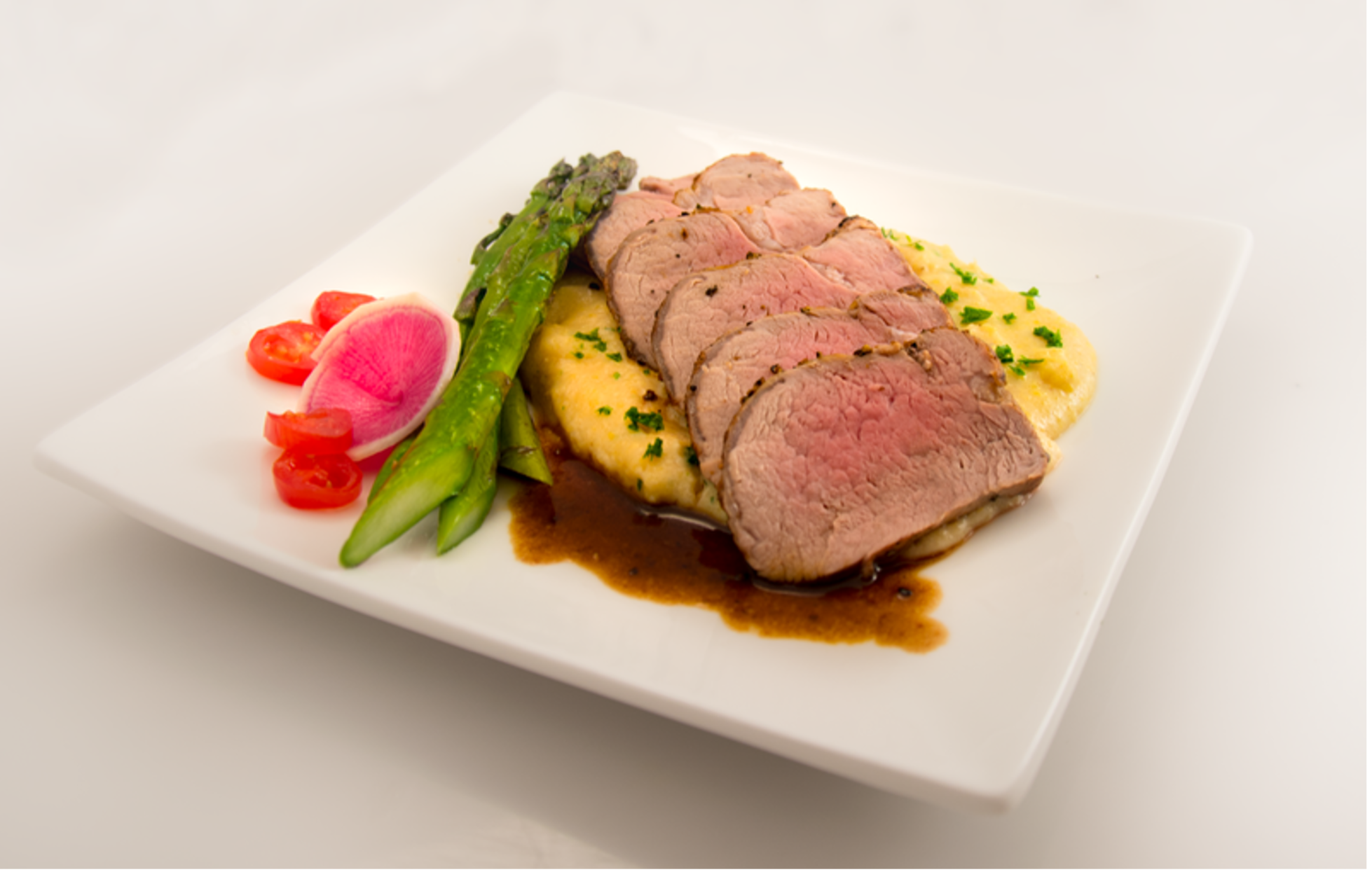 Contamination is the third appraisal of core disgust.  A contamination response occurs when we reject contaminated food from the mouth or simply avoid foods that touched a contaminated object, even if the contact occurred over a short period of time.  For example, refusing to drink a glass of milk after you remove a fly from the milk.  The fly only contacted the milk for a millisecond, but it is still possible the fly touched something contaminated.  Some believe the contamination response is an adaptation that functions to help humans avoid diseases and death.   Two appraisals explain the universal contamination response: 1) law of contagion and 2) law of similarity (Rozin et al., 1986).  The law of contagion occurs when people think “once in contact, always in contact.” In other words, the law of contagion assumes that when one neutral object touches a contaminated object, the properties of the contaminated object are permanently transferred to the neutral object, even though a brief contact between two objects may not actually result in contamination.  The contaminated object could be food, animal, or even an immoral person.  When we perceived that a neutral object that we put into our mouth has retained properties of a contaminated object, that causes core disgust.  Though rules and rituals, some cultures try to make the law of contagion less salient or conscious.  For instance, Judaism has kosher rules which for example require that different pots/pans be used for meat and dairy, so that the meat from the animal is not cooked in the animal’s own dairy.  In some Indian and Asian cultures, people eat with their right hands and use their left hands for contaminated activities (e.g., wiping their bottom, cleaning their feet).   Do we have any rituals in North American that reduce thoughts about contamination?  What about the five-second rule? In general, people may avoid this appraisal by not thinking about the people making their food or thinking about the animal that the food came from.    The law of similarity states that if two products appear similar, then the two products have the same underlying properties as well.  Said another way the appearance of an object represents reality; the image equals the object.  This applies to disgust such that an object that looks like something disgusting must be disgusting itself.  For instance, people refuse to eat objects that look like feces, such as melted chocolate.  Together, the laws of contagion and similarity are called the laws of sympathetic magic – magic because long ago, remnants of an individual (e.g., hair, fingernail scrapings) were thought to represent the spirit of the whole individual.

Rozin et al. (1986) tested the laws of contagion and similarity.  To test for the law of contagion, participants tasted and rated their liking for juice – these ratings represented the pre-test.  Then, participants watched while the experimenter placed one of two objects into the cup of juice – 1) plastic birthday candle (control) and  2) a dried and dead sterilized cockroach (experimental).  Participants were all told that the dead cockroach had been sterilized and was safe. After removing the candle or roach from the juice, participants rated their liking for the juice on a 200 mm scale.  Figure 1 shows that participants reported significantly LESS liking for the juice when contaminated by a sterile cockroach compared to the pretest trial. 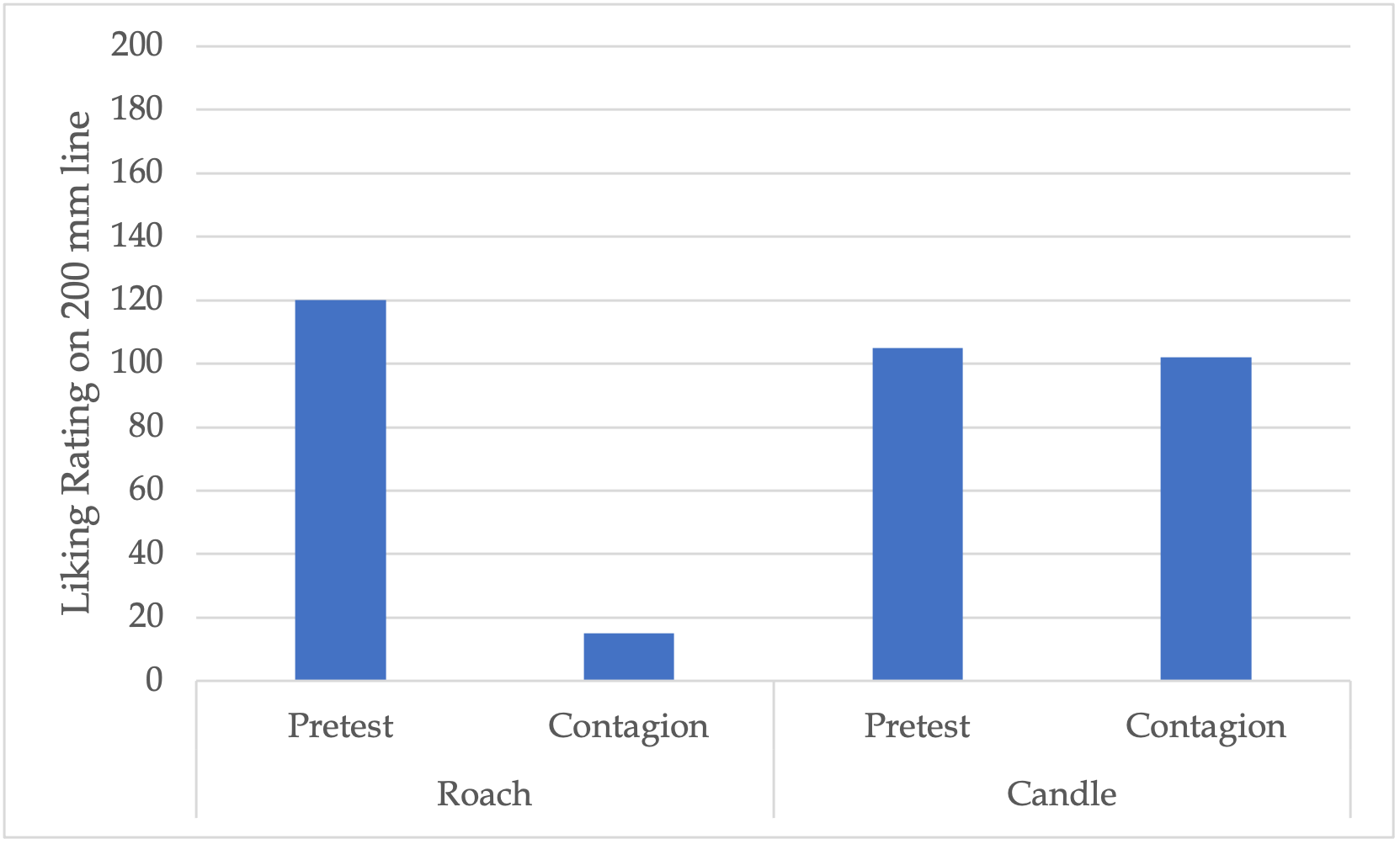