Let’s talk about two studies that investigate the effects of confrontation.

James Pennebaker developed an expressive writing paradigm to investigate the effects of using writing to confront past eliciting events that were emotional and significantly important to one’s life.  In the basic laboratory study, participants are randomly assigned to an expressive writing or control group.  In the writing group, participants come to the lab 3 to 5 days each week and spend 15 to 30 minutes each day writing about their “…very deepest thoughts and feeling about an extremely important emotional issue that has affected you and your life” (Pennebaker, 1997, p. 162).   Participants pick the topic and may write about the same or different topics each day.  Participants in the control group write about neutral topics.  The dependent variables include a variety of psychological and physical outcomes.

Pennebaker developed a linguistic coding system to further analyze the words participants use in their writing.  The coding system (LIWC) categorized words into negative emotion words, positive emotion words, causal words (because, reason) and insight words (understand, realize).  The number of words used in each category predicted physical health, but not mental health.  Results indicated that:

What do you think is happening when people write?  Think about why people report the highest physical health when they are using a moderate number of negative emotion words. It might be that people who suppress would tend to use few negative words, but now the task of writing about emotions reduces suppression and its negative effects on health.  It could be that when people write and use a moderate number of negative words they are effectively confronting and even re-appraising the situation.  Maybe people with lots of negative emotion words do not have the working memory to confront or are using the strategy of rumination – and focus too much on their current feelings instead of changing their thoughts about the upsetting eliciting event. 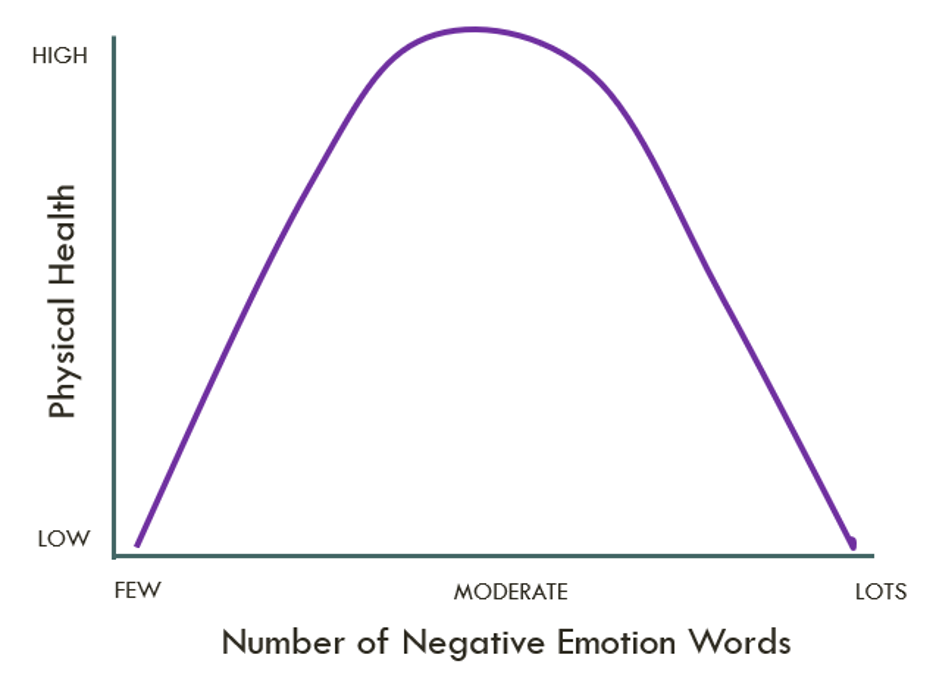