Sauter, Eisner, Ekman, and Scott (2010) conducted a cross-cultural study to determine whether people could correctly identify the emotions represented by vocal change. (Note: Ekman, a basic emotions researcher, is one of the authors). Sauter et al. (2010) recruited European English participants and Himba participants (representing the first quasi-IV). Participants listened to an emotional story in their own language. Then, researchers listened to two audio clips of vocal change. Participants were instructed to select the audio clip that matched the emotion in the story. Participants completed this method twice – once when listening to voices from their own culture and a second time when listening to voices from the other culture (IV #2). It is important to note that the sounds were recordings of actors making the vocal sounds. The actors were given a brief scenario and instructed to make the vocalization that they would make if they experienced the emotion in that scenario. The table below shows the emotion story and corresponding correct vocal change.

The dependent variable was the mean number of correct responses.  For each emotion, participants completed four trials.  Sauter et al. (2010) suggested that identifying the correct emotion at beyond chance levels provides evidence of universality.  So, we would want to see that participants correctly identified each emotion on more than two out of four trials (that the average was above the red line in the figures below).First, we will consider the within cultures results – when Himba participants listened to Himba voices and English participants listened to English voices.  For all nine emotions, the English participants matched the vocal sound to the correct emotion. The Himba matched the vocal sound to the emotion conveyed in the story for all emotions except relief.

Now, let’s consider the across cultures results – when Himba participants listened to the English voices and the English participants listened to the Himba voices. Again, English participants matched the correct Himba vocal sound to the emotion story for all nine emotions.  Himba participants matched the correct English vocal sound to the emotion story for the following six emotions: anger, disgust, fear, sadness, surprise and amusement.  It is interesting to note that for within and across cultures, Himba participants did not reach beyond chance levels for some positive emotions (e.g., pleasure, achievement/pride) and for mixed emotions (e.g., relief).

In general, these findings provide support for universal changes in vocal affect for some emotions (e.g., anger, disgust, fear, sadness, surprise, amusement), but suggest cross-cultural differences exist for other emotions. 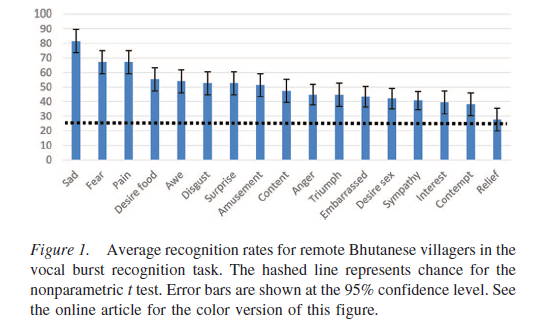