In this section, we will discuss the cognitive appraisals associated with anger.  The information discussed in this section is relevant to the eliciting events that cause anger, as well.  Why?  Because our cognitive appraisals can include our perception of the eliciting events that caused anger.  After reviewing Scherer’s (1997) study, we will discuss some social psychological theories that explain the causes of anger.

Scherer’s (1997) study found universal and cultural differences in cognitive appraisals.  For a review of Scherer’s (1997) study, go to the modern theories section on cognitive appraisals.  Means (see Table 5), collapsed across all world regions, show that participants reported the following appraisals when recalling an anger experience: unexpected, unpleasant, goal obstruction, perceived unfairness, external causation, perceive that one does not need to cope, slightly immoral, and no change in self-esteem.  Figure 6 displays the cross-cultural differences in cognitive appraisals for anger.  In Figure 6 the presence of a circle around a datapoint indicates that the country with the circle showed means significantly different from the mean of the remainder of the sample.  Unfairness and immorality showed cultural differences.  African countries viewed anger as higher in unfairness and immorality, while Latin American participants reported anger to be caused by something moral. 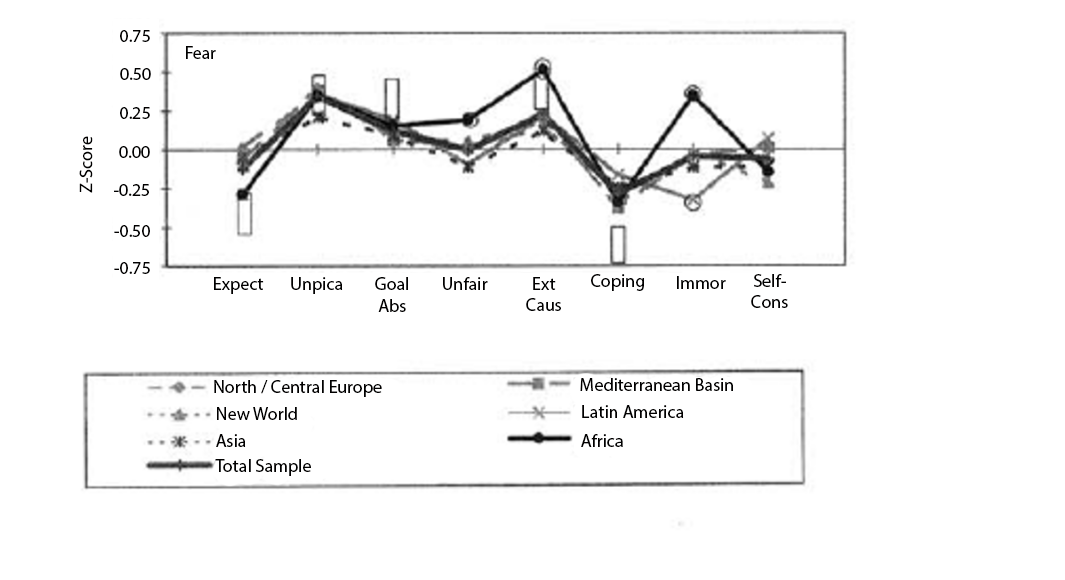 Note. Presence of a circle around a datapoint indicates that the country with the circle showed means significantly different from the mean of the remainder of the sample. Adapted from “The Role of Culture in Emotion-Antecedent Appraisal,” by K.R. Scherer, 1997, Journal of Personality and Social Psychology, 73(5), p. 912, (https://doi.org/10.1037/0022-3514.73.5.902). Copyright 1997 by the American Psychological Association.

Dollard and colleagues also discussed the determinants of the intensity of anger/aggression:

Dollard and colleagues also discussed behavior changes of anger.  They differentiated between direct and displaced anger.  In both direct and displaced anger, we approach a target.  In direct anger, we aggress toward the individual or thing that caused the frustration.  In displaced anger, we approach a lower status or more vulnerable target, such s a child or a pet.  Why would we exhibit displaced anger and not direct anger?  Well, directly approaching a target who is stronger or more dominant than us could result in harm to us or even death!  Second, sometimes the person who blocked our goal is not in the same physical space or sometimes we may not know who caused the frustration.

The Frustration-Aggression Hypothesis is important because it was one of the first social psychological theories to discuss how goal blockage causes anger and aggression.  But, as with all theories, some criticism of this theory exists.  First, this theory focused on hostile aggression, where the goal is to injure another person.  Researchers point out that all aggression is not a direct result of frustration, as in instrumental aggression.  Critics also point out that not every frustration causes anger – we can be frustrated and not show aggression or anger.  Anger researchers, such as Berkowitz (1989, 1993, 2012), also state that goal obstruction is not a required cognitive appraisal for anger.  Berkowitz suggests that simply feeling unpleasant can increase the likelihood of anger and aggression.

Next, we discuss studies that have identified other cognitive appraisals for anger.