For this activity, place the below emotion words in a spot on the line according to each emotion’s level of valence and level of activation. 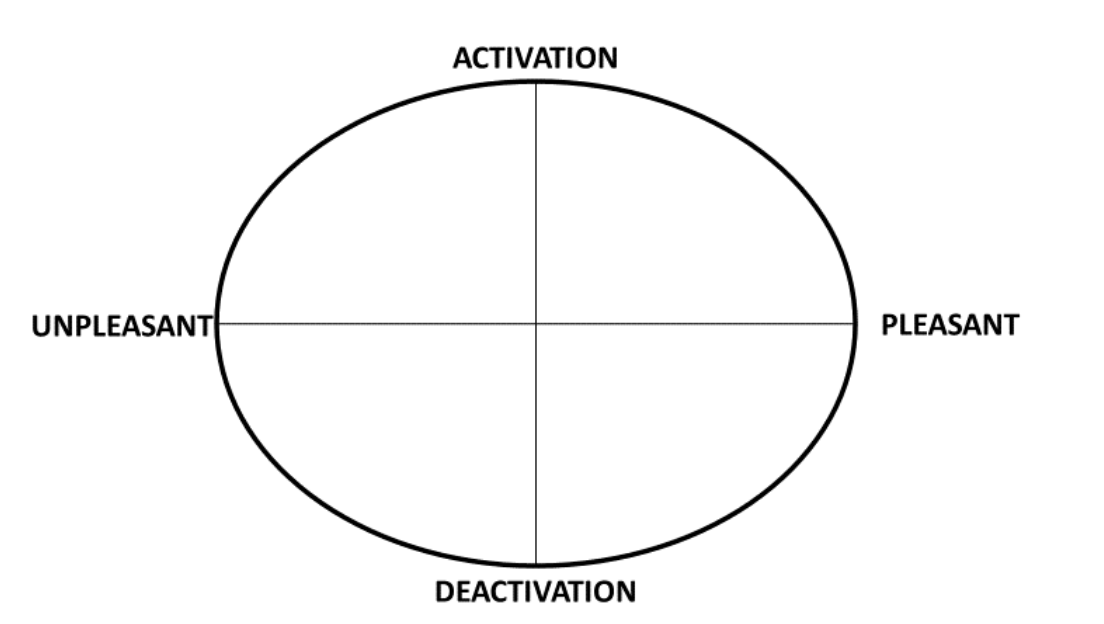 James Russell developed a circumplex model based on subjective feelings (see Figure 5).  In an early study, Russell (1980) asked participants to sort 28 emotion words into categories based on perceived similarity.  Then, Russell used a statistical technique to group the emotion ratings based on positive correlations – in essence, grouping similarly related emotion words together in a circle.  This multidimensional scaling analysis revealed two bipolar dimensions – valence and activation!  Thus, any emotion can be described using an unpleasantness/pleasantness dimension (valence) and a high arousal/low arousal dimension (activation).

Russell’s (1980) model suggests valence and activation are independent, bipolar dimensions.  Independent means valence and activation are uncorrelated.  Bipolar means that opposite emotions terms represent each of the opposite poles for valence and activation.  For example, in Figure 5 above, happy and sad are displayed at opposite poles of the pleasantness dimension. As shown in Figure 6 below in the orange circles, tense and sleepy are displayed at opposing ends of the activation dimension.  Thus, a person cannot be tense and sleepy at the same time. Finally, according to this model mixed emotions are similar in subjective feelings.  Thus, a mixed emotion cannot be comprised of feelings that differ drastically in valence or arousal – such as happiness and sadness.  In the figure below, mixed emotional experiences would be those emotions located next to each other in the same quadrant. 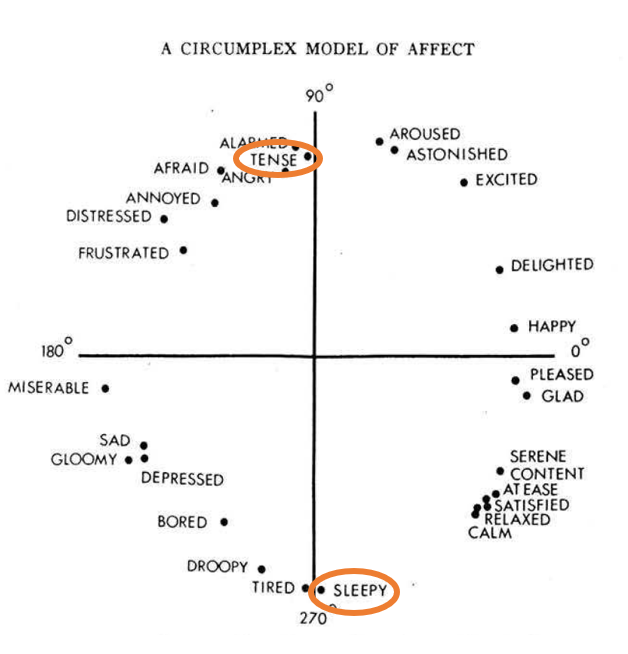 Russell and colleagues (Russell, 1980; Russell & Barrett, 1999) differentiate between core affect and prototypical emotion episodes (PEE).  Core affect represents our most basic feeling at any point in time.  Core affect includes prolonged objectless moods AND specific emotion episodes.  There is always a cause to core affect.  Sometimes people are aware of the cause, as in emotion episodes, but often people are unaware of the causes, such as when changes in the environment or our physical bodies cause a change in our mood.  Core affect is always present and can include feelings of neutrality, although most of core affect describes people’s general level of unpleasantness/pleasantness and arousal.  Prototypical emotion episodes (PEE) are emotions caused by a specific eliciting event – what we defined earlier as an emotion.  Russell and Barrett (1999) state that PEE include the following components:

Russell and Barrett further explain that all emotion episodes start when an event causes a change in core affect, but appraisals, behaviors, and physiological changes have not occurred.  Once the individual appraises and identifies the eliciting event and exhibits behavior and physiological changes, the prototypical emotion episode has begun.  So, if we are feeling down but do not know why – that would represent core affect.  If we eventually determine that we feel down because we miss our family, this would represent a PEE because we can now know the cause of our core affect and can consciously identify the emotion as sadness.  In Russell’s circumplex model, the small emotion terms in the inner circle represent core affect, whereas the emotion terms on the circle represent PEEs.