Seyle (1974) emphasized how the physical body reacted to stress. Specifically, Seyle states that during a stressful experience, our bodies move through three stages: 1) Alarm, 2) Resistance, and 3) Exhaustion. Alarm occurs when we experience a brief period of SNS activation. During the alarm stage we experience the highest levels of arousal because our body is preparing for defensive responses. During resistance we experience moderate arousal that lasts for a long period of time. During the resistance stage, the adrenal cortex secretes three hormones – cortisol, epinephrine, and norepinephrine. These hormones prepare our body to heal wounds, fight infections, and to essentially protect our bodies from harm/death. Exhaustion occurs when the prolonged response from the resistance stage weakens our body, resulting in fatigue, loss of appetite, and exhaustion! During the exhaustion stage, we have fewer physical resources

Below, the findings are discussed.  To view real-life movements of each action unit, please visit this webpage: FACS – A Visual Guidebook.

A few studies have investigated how our body changes during the stressful experience. Dickerson & Kemeny (2004) conducted a meta-analysis on over 200 studies with 6,000 participants who had experienced a short stressful task in the laboratory. The stressors ranged from physical stress (electric shock, prolonged exercise) to psychological stress (e.g., public speaking, mental arithmetic). The stressful tasks lasted less than 1 hour. During these tasks, participants cortisol levels were measured. Figure 20 displays the effect sizes of cortisol changes after the stressor started and Figure 21 shows cortisol changes after the stressor ended. In these figures, the stars indicate participants’ cortisol levels significantly changed from their baseline cortisol levels. Higher effect sizes indicate the significant change in cortisol from baseline was large. 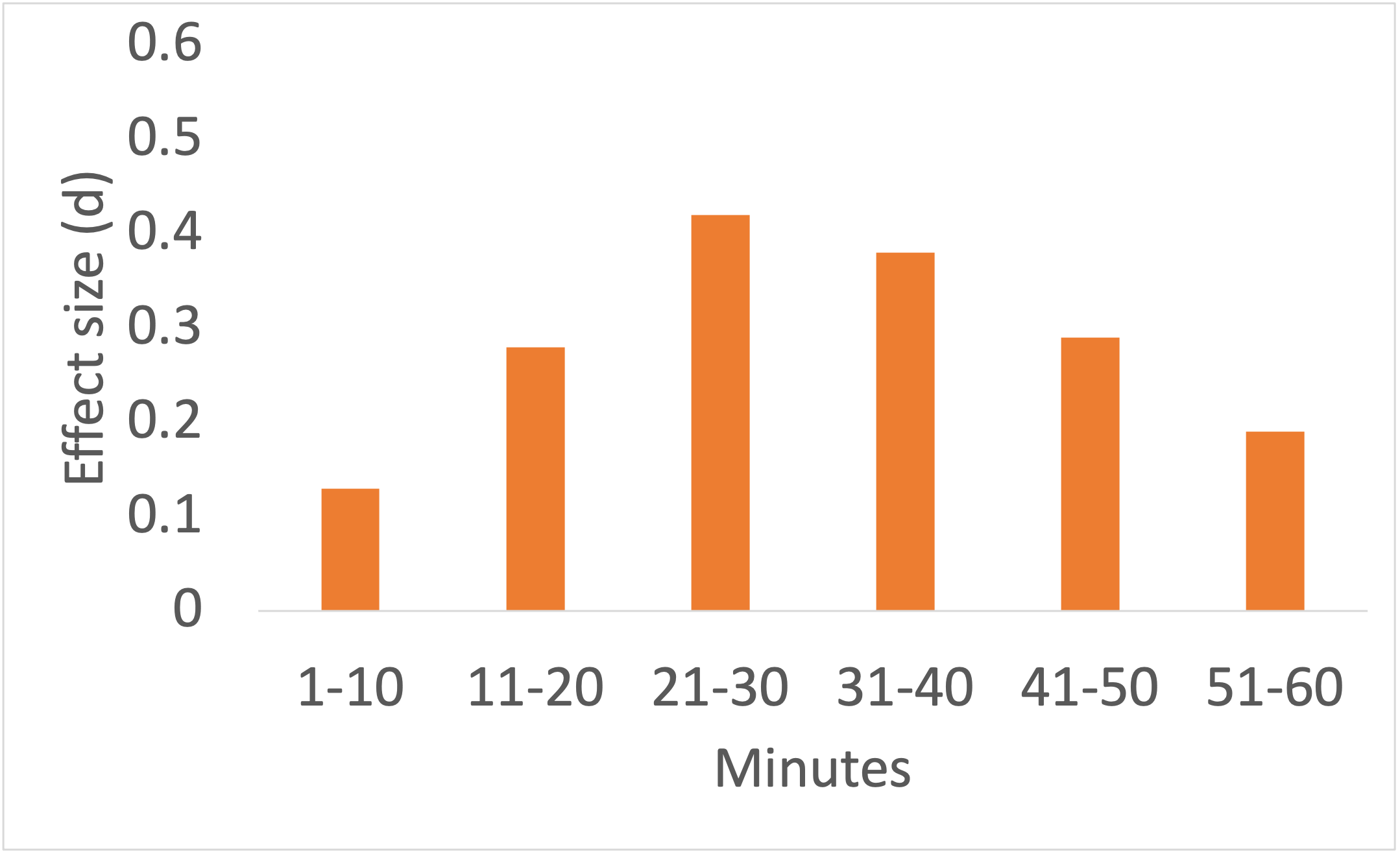 In the above figure, participants’ cortisol levels increased from baseline from the onset of the stress (1-10 minutes) and remained raised through the 60 minutes of the stressor. These findings demonstrate that stress is not a fleeting emotion but occurs over a long period of time.

Another study (Fabes & Eisenberg, 1997) investigated how baseline vagal tone influence people’s stress during a stressful task. We discussed vagal tone here. Vagal tone is an indicator of PNS activation and is associated with the experience of low arousal, positive emotions and better emotion regulation. In this study, participants viewed a neutral film of dolphins swimming with calm music in the background. During the neutral film, researchers obtained a baseline measure of vagal tone. Based on these findings, participants were divided into low, mean, or high vagal tone groups. Participants then completed a 2-week diary. Each day, they described their most stressful experience that day, rated the level of stress, rated 14 emotions about this event, and rated their coping responses. Figure 22 shows the findings. The baseline level of vagal tone from part 1 of the study is on the x-axis. The y-axis shows the outcome variable, which is the average of the extent to which participants experienced 14 negative emotions across the 2-week period. Each line represents participants’ stress ratings for each event averaged across the two-week period. For moderate and high stressors, high vagal tone was associated with fewer negative emotions compared to low and mean vagal tone groups. For events low in stress, differences were not found between the three vagal tone groups. These findings suggest that the amount of stress we experience during a stressful event does depend on our baseline vagal tone. People with high vagal tone, experienced fewer negative emotions. 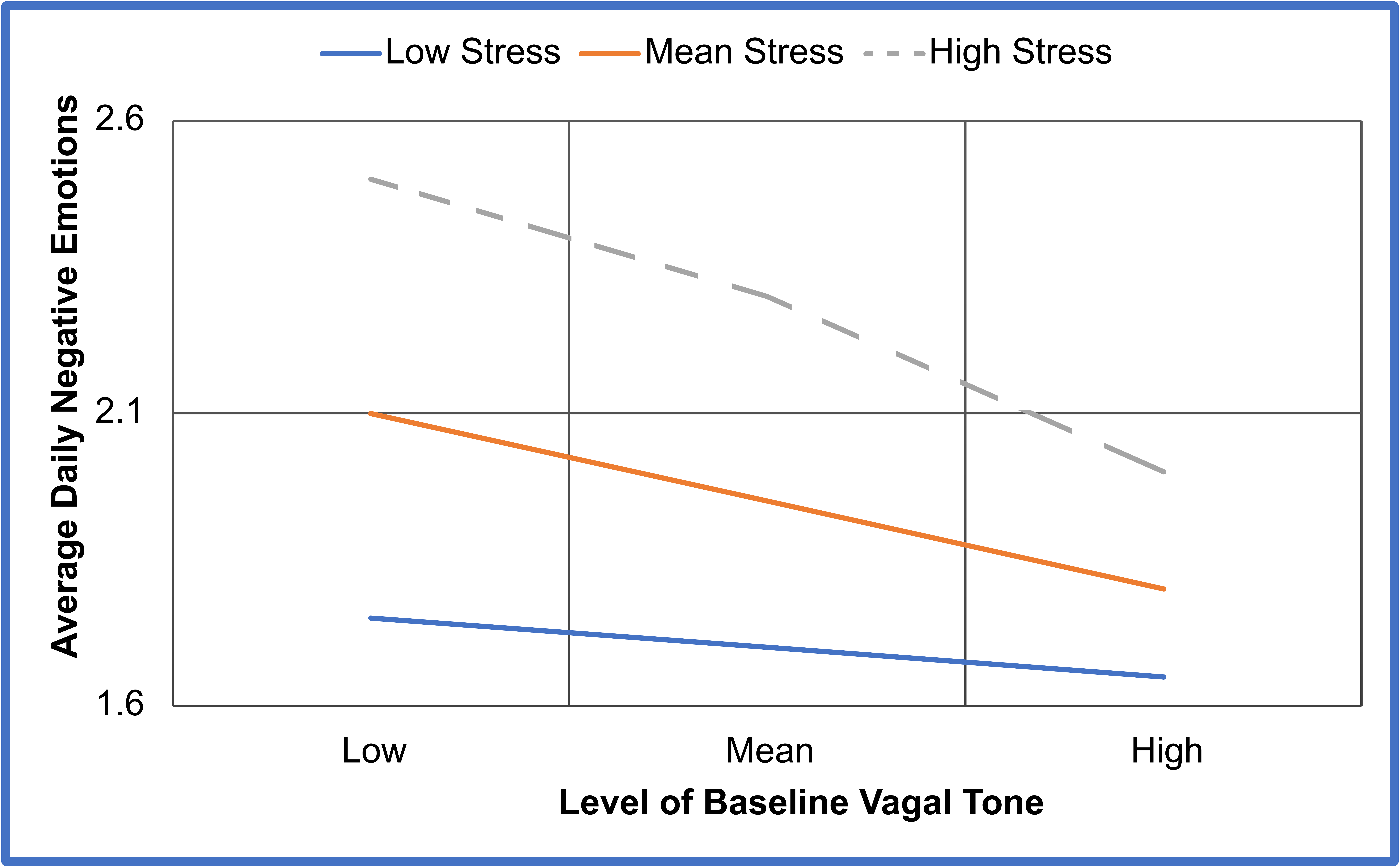