Participants exhibited the greatest aggression when the confederate did not have a good reason for interfering with the group project.  This finding is demonstrated by 29% of the participants selecting the greatest form of aggression (i.e., public rejection), and 100%  selecting private rejection with punishment.  Note that 0% of the frustration justified group selected the most severe aggression – public rejection.  In this group, when the confederate had a hearing defect, most participants selected to privately aggress on the self-report (50%) and a smaller number (27%) selected the moderate form of aggression – private rejection with punishment.  In conclusion, this study shows us that simply experiencing a frustration does not result in overt aggression.  Instead, experiencing a frustration that is deliberately caused by another causes the most aggression.

Table 6
% of participants who aggressed toward the confederate (Burnstein & Worchel, 1962)

Some other cognitive appraisals that cause anger have been suggested.  Experiencing a drop in self-esteem, such as after someone insults us, might cause anger (Lazarus, 1991, as cited in Berkowitz, 2012).  The experience of anger would motivate us to re-establish our self-esteem.  Perceiving that a decision is unfair also may cause anger.  In fact, some work is suggesting that perceptions of unfairness combined with high perceptions of control (we can do something about the unfairness), causes anger and approach behavior.  But perceptions of unfairness and low perception of control (we can’t do anything about the unfairness), causes sadness. Another cognitive appraisal may be personal significance.  This means that the frustration must block our own goals to cause anger.  Yet, some people point out that we can be angry when something happens to our close other.  So, maybe it depends on how close we are to the person who experiences the goal blockage.

In the literature, these is disagreement about whether an external causation is required for anger.  Theorists such as Dollard, Lazarus, and other appraisal theorists believe the eliciting event must be external to the self.  Yet, others, such as Berkowitz and Anderson disagree.  Internal changes in our body, such as pain, heat/cold, bad smells, headaches, and hunger may make it more likely we experience anger.  Let’s talk about a study that can help us understand!

Similar to our last study, in this study (Geen, 1968) participants worked on jigsaw puzzle with a confederate posing as a participant.  The independent variable included three conditions:

In condition 1, participants’ cognitive appraisal would have been external – the confederate is preventing them from completing the puzzle.  In condition #2, the cognitive appraisal would be internal causation – it’s something about me that is preventing the completion of the puzzle (maybe we attribute it to IQ).  In Group 3, there is no frustration.  To measure the dependent variable, participants were given an opportunity to shock the confederates (similar to Milgram’s classic study).  The dependent variable was a measure of aggression – with greater levels of shock indicating greater aggression.

Level of shocks selected were significantly different among the three conditions.  Participants in the external causation group selected the greatest level of shock, followed by condition 2, and condition 3.  Thus, experiencing an external cause of frustration causes the GREATEST level of aggression.  But, making an internal attribution for our anger (it’s something about me!  My intelligence or effort!) causes us to aggress toward a target too!  Said simply – blaming the self for the frustration causes us to experience anger too.

Now, these findings suggest we can cause our own anger.  But some researchers argue over whether we can direct our anger toward the self.  Some people believe shame is the emotion we experience when we are angry at the self.  Shame occurs when we evaluate our entire, global self as a bad person.  Shame, in fact, is positively correlated with anger (Tangney et al., 1992) suggesting that shame may be a word we use to describe anger toward the self.  Guilt is negatively correlated with anger (Tangney et al., 1992). 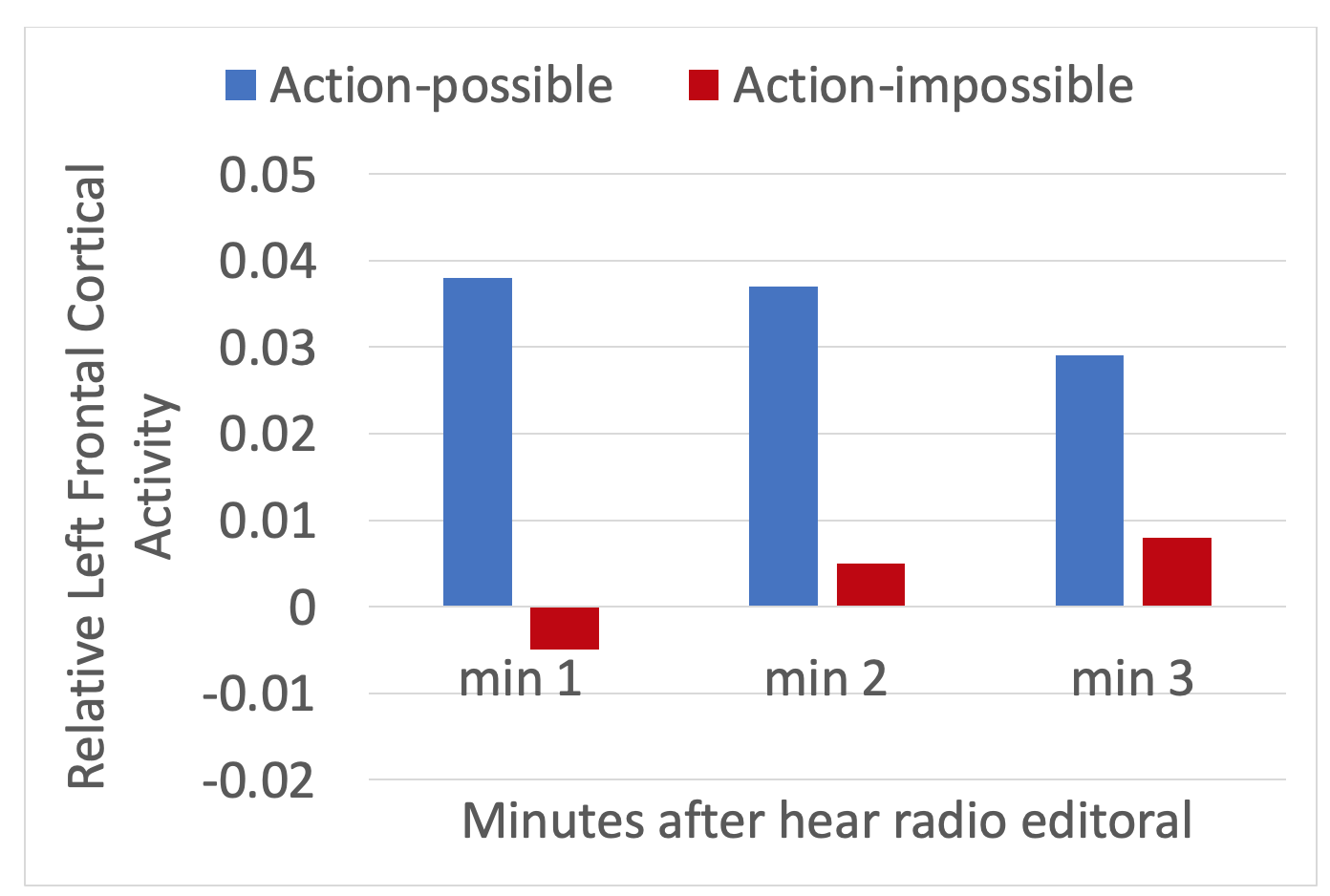 In this figure, the y-axis represents the change from baseline of left front cortical activity. The x-axis displays how much time had passed in the radio editorial. Only participants in the action-possible condition (sign the petition!) showed activity in the left cortex. Interestingly, participants in both conditions reported the same amount of anger. These findings show that when approach is possible during a goal obstruction, our left cortex is activated, suggesting we are experiencing an approach emotion. A downside to this study is that they did not measure right cortical activity, which may have been activated for the action-impossible condition.