Animal-nature disgust is the second type of disgust. When the eliciting event reminds us that we ourselves are animals, animal-nature disgust is elicited. Animal-nature disgust occurs when the boundaries between humans and animals are blurred, thus reminding us that we are just as vulnerable to death as other animals. This type of disgust may have developed after core disgust. Instead of focusing on the mouth like core disgust, animal-nature disgust expands the disgust emotion to the entire body.Haidt et al. (1997) asked participants to list the most disgusting things they could think of, then categorized their answers into groups based on similarity. They found that 25% of the items represented core disgust, whereas 75% of the items did not relate to the mouth, food, or bodily products. The remaining 75% of these events could be grouped into the following types of eliciting events:
These four groups represent the eliciting events that cause animal-nature disgust. In fact, these four events are additional ways in which we could contract diseases or infections and thus animal-nature disgust may have evolved as an adaptation to maintain our health. When we hear about these four events occurring, or experience them ourselves, we are reminded of our animal nature and experience animal-nature disgust. Specifically, envelope violations, remind us that we are vulnerable animals whose bodies could be harmed at any time.Terror Management Theory (TMT; Greenberg et al., 1986) suggests that thinking about our own death is threatening and causes death anxiety or “terror.” In turn, this death anxiety lowers our self-esteem. TMT further states that when we experience this death-related anxiety we in turn engage in behaviors or thoughts to reduce the anxiety and to maintain our self-esteem. For example, when thoughts of death are accessible, people adhere more to their cultural worldviews (e.g., religion, culture, personal morals; Greenberg et al., 1990), draw closer to their relationship partners (Florian et al., 2002; Mikulincer et al. 2004), and engage in healthy behaviors (e.g., smoke less, exercise more; Arndt et al., 2003; Bozo et al., 2009).

TMT emphasizes that humans are the only animals that have conscious thoughts and awareness of their own death. Extending TMT theory, Goldenberg et al. (2001) suggested that making death salient would elicit a disgust response in humans. In this study, participants were randomly assigned to either a control condition or a mortality salience condition. In the mortality salience condition, participants were asked to describe the emotions they experience when contemplating their own death and to describe what will happen to them after they die. Then, participants completed a disgust sensitivity measure. Participants who thoughts about their death reported more disgust in the domains of body products and animals; food-disgust approached significance (see Figure 3).

Figure 3
Influence of Mortality Salience on Domains of Disgust Sensitivity 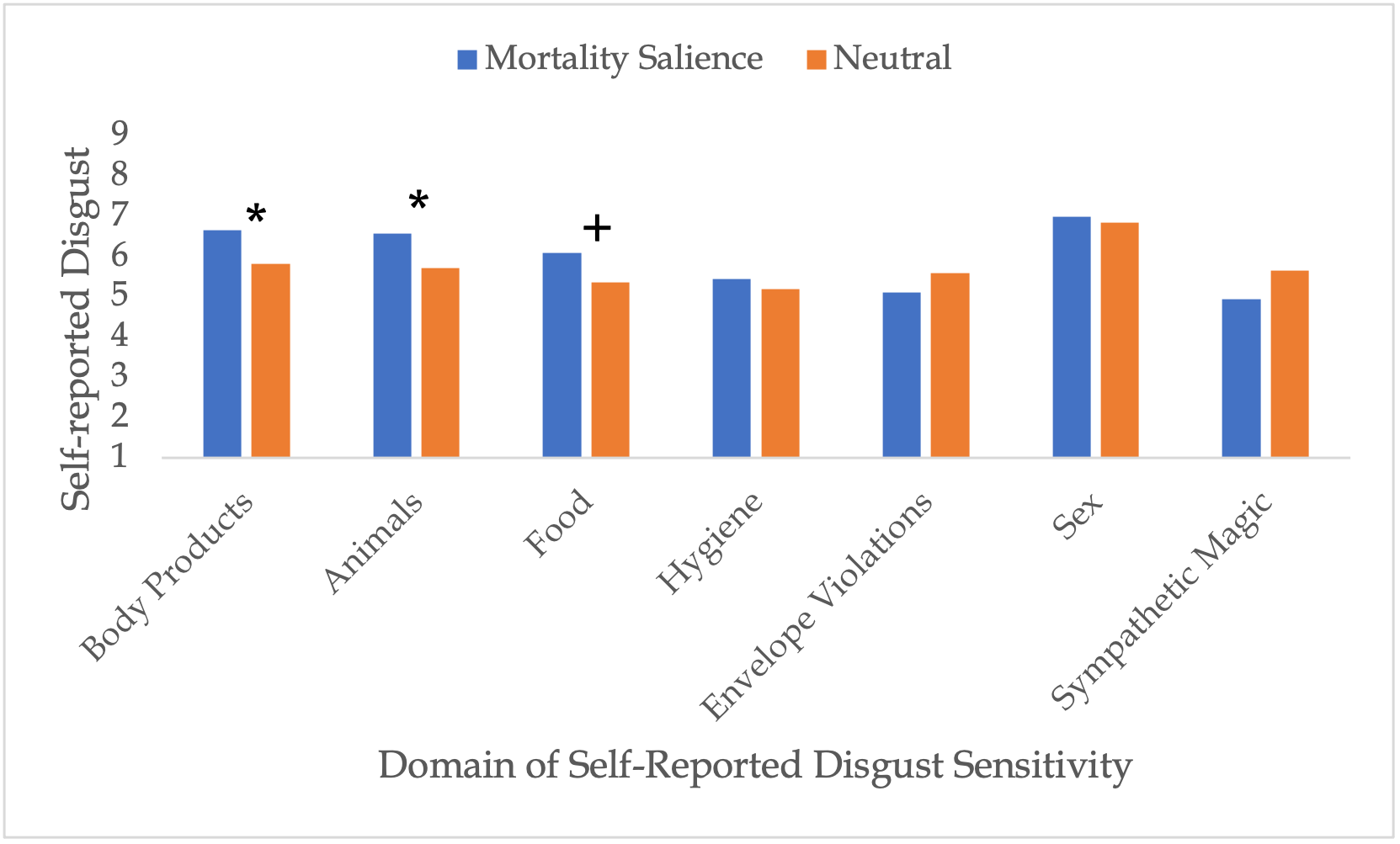 In a follow-up study Goldenberg et al. (2001) conducted the same mortality salience manipulation, but now participants in the control condition discussed an aversive condition – experiencing pain at the dentist. After completing the manipulation, participants rated their views of one of two articles. One article talked about how humans were similar to animals and the other talked about how humans were unique to other animals. Participants thinking about their own death viewed the humans-unique article as more positive than the humans-animals article, whereas the dental pain condition showed no preference for either article. These findings (see Figure 4) show that thoughts of death, not just thoughts about an aversive situation, cause people to appraise the self as superior to animals. Why? Because thoughts about death increase anxiety and disgust, and by perceiving clear boundaries between the self and vulnerable animals we can reduce our anxiety and disgust. 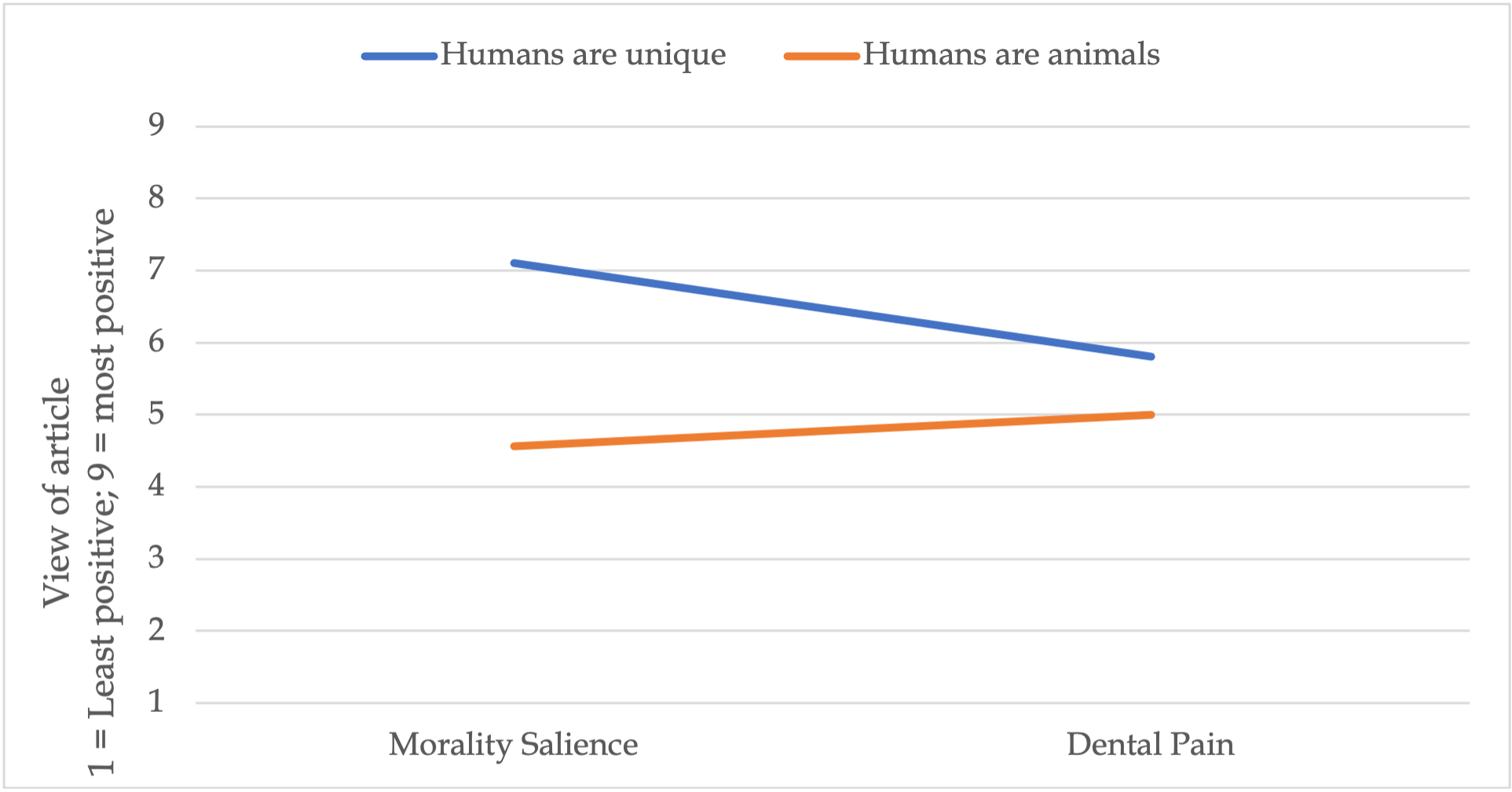 We just reviewed evidence that thinking about death causes us to experience disgust. Similarly, when disgust is elicited, people report thoughts about their death (Cox et al., 2007). In this study, participants read one of the two articles as used in the Goldenberg et al. (2001) study. These articles functioned to prime people to perceive humans as unique from OR similar to animals. Following the articles, participants viewed either disgusting or neutral IAPS photos. The article participants read and the IAPS photos viewed both represent between-subjects independent variables. For the dependent variable, participants completed 25 partially spelled words, 5 of which could be completed with a death-related word (see Table 2). The dependent variable measured how many of the 5 words participants completed with the death-related answer. Participants who completed all 5 words with death-related terms would be thinking more about death (i.e., death accessibility). Participants who viewed the disgusting photos completed more of the word fragments with death words, compared to people who viewed the neutral photos. These findings indicate that experiencing disgust (as elicited by the photos) resulted in more accessible thoughts about death. Broadly, this means that experiencing disgust causes cognitive appraisals of death.

In a follow-up study, Cox et al. (2007) elicited disgust with the Disgust Sensitivity Scale (Haidt et al., 1994), instead of the IAPS photos. In addition, the other emotion primed was anxiety (instead of a neutral feeling state). In this study, participants read one of the same two essays about animals and humans, completed either the emotion or anxiety emotion prime, and then completed the same 25-word fragment test. Results demonstrated (see Figure 5) that participants who experienced disgust AND who read the humans are the same as animals article experienced the most death-thought accessibility. Because participants in the anxiety condition completed the same number of death-related words when they read either essay, we can conclude that its’ not that any negative emotions causes thoughts of death – specifically the emotion disgust causes thoughts of death!