Defense Cascade Model of Fear.  The Defense Cascade (Lang et al., 2000) is a model that identifies how behavior and physiological changes occur over time during a fear experience (see Figure 1).  According to this model, animals go through three stages during the experience of fear. As the animal moves through each stage, the eliciting stimulus becomes clearer and closer, and arousal increases.  The pre-encounter phase is activated in situations where the animal recalls this stimulus in the past (such as when meeting a predator).  During the pre-encounter phase,  sweating increases, and heart rate and startle reflex decrease.  It is believed heart rate and startle reflex first decrease because the animal is focused – looking for potential threats.  The animal moves from the pre- to post-encounter stage, when the animal identifies the threat, but this threat may still be ambiguous and physically distant.  Thus, in the post-encounter phase the threat is not imminent.  During the post-encounter phase,  freezing and the startle behavior occurs.  Freezing and startle have two functions – 1) pausing helps the animal to evaluate the presence of a threat and 2) pausing may prevent the predator from detecting the animal.  Startle reflex and freezing behaviors are called inhibiting behaviors – because these behaviors stop the animal’s current activities and focus their attention on the threat.  In the circa-strike stage, the threat or predator is now clear and close to the animal.  Note that from pre to post-encounter, heart rate drops, then increases in the circa-strike stage.  In the circa-strike stage, the threat is now imminent and clear, thus the animal engages in overt, activating behaviors to avoid physical threat and danger.  Activating behaviors include escape/avoidance, and if escape is not possible, then defensive behaviors such as aggression.  It is important to note that these behavior changes occur very quickly.  It probably takes milliseconds to move from inhibiting to activating behaviors. 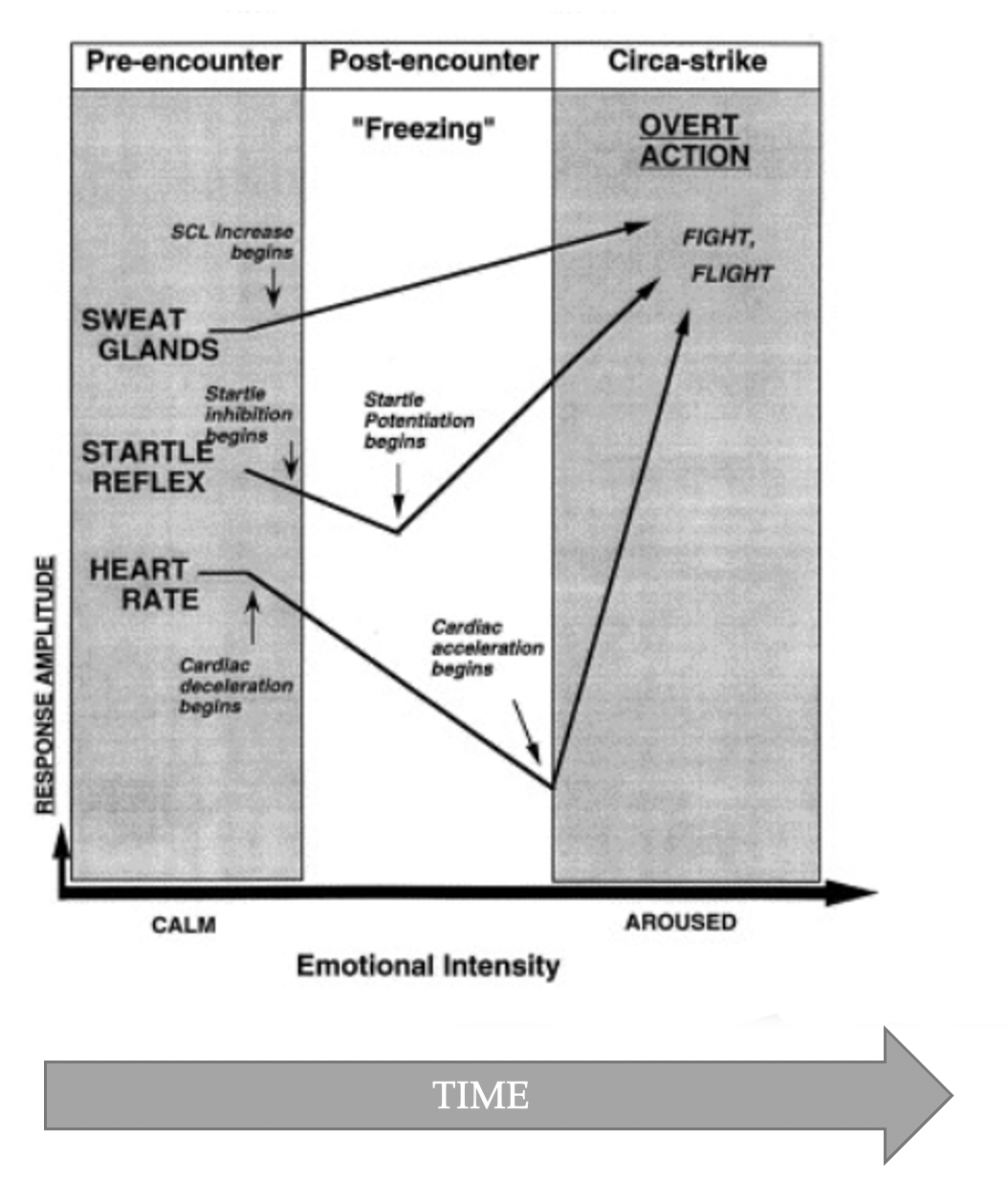 After the startle reflex, freezing behavior occurs. Freezing occurs when the body stops voluntary movements and physiological processes such as digestion stop. Freezing has two functions. The first is that freezing behaviors allows us to acquire more information about the potential threat by exploring our environment, called an orienting response. The second function is to help the animal avoid detection by not moving or by appearing to be dead. In humans, the visual search and attentional blink paradigms are two methods used to measure the orienting response of freezing behavior (more on these later).

After freezing, if the threat becomes closer and more significant, then fleeing and fighting occur. The defense cascade theorizes that animals flee when escaping without harm is effective. But, if escaping successfully is unlikely, then animals will engage in defense behaviors such as aggression or submission. In general, if the animal successfully flees, then fight behaviors would not occur.