The insula is activated when people view disgusting facial expressions, watch disgusting videos, view disgusting photos, when imagining the self in core disgust scenarios (Schaich Borg et al. 2008; for a review, Chapman & Anderson, 2012, 2013), and when hearing about moral violations (Harris & Fiske, 2006; Ying et al., 2018).  But, the insula is also activated for anger, fear, and pain (Schienle et al., 2002; for a review, Chapman & Anderson, 2013).  The putamen is activated when viewing photos of disgust (Calder et al., 2000; Hennenlotter et al., 2004) and when hearing about moral violations (Schaich Borg et al., 2008).  But, the putamen is also activated for empathy (Pauli et al. 2016), and when viewing fear and contempt facial expressions (Sambataro et al., 2006; Uono et al., 2017).  In fact, Sambataro et al. (2006) showed that healthy individuals experienced greater putamen activation when viewing contempt (vs. disgust) faces.  But, contempt faces did not activate the insula at all!

Figure 13
Location of Insula in Brain 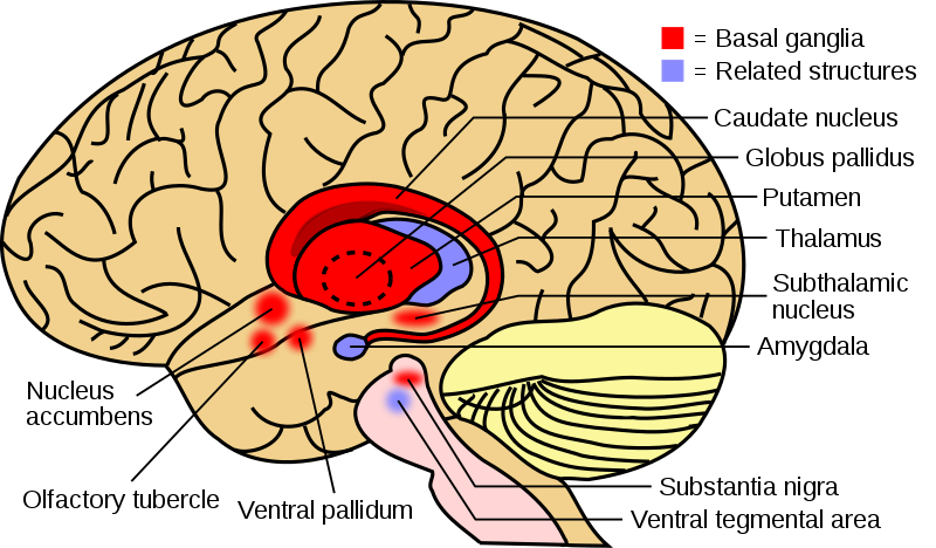 Damage to the Putamen and Insula. One way to investigate the functions of the insula and putamen is to assess how the emotional experiences of patients diagnosed with Huntington’s disease are affected.  Huntington’s disease is a genetic disorder that includes problems with movements (standing, balance, uncontrolled jerking), cognitive decline, and impairments in emotion recognition and experience.  For instance, changes in emotions such as mood swings, aggressive behavior, and/or depression/flat affect.  In addition, people diagnosed with Huntington’s experience difficulty identifying disgust in facial expressions and vocal sounds. Huntington’s disease has been linked to damage to the basal ganglia, insula, and putamen.

Research has demonstrated that people diagnosed with Huntington’s exhibit impairment in identification of facial expressions (Sprengelmeyer et al., 1996, 1998) and show less activation in putamen and insula when viewing disgusting facial expressions, compared to healthy controls (Hennenlotter et al, 2004) .  In one study (Calder et al., 2000), NK, a patient diagnosed with Huntington’s disease, exhibited damage to his insula and putamen.  NK and a group of healthy controls were given a list of 6 emotions words and asked to match the 6 words to 6 of Ekman and Friesen’s (1978) FACS facial expression. The emotions were anger, contempt, disgust, fear, happiness, sadness, and surprise. NK correctly identified 4 of the 10 disgust photos, whereas controls averaged 8 out of the 10 disgust photos.  NK tended to identify the disgust facial expression as anger or contempt, which are three emotions commonly mixed up!  NK and controls did not show differences on the other 5 emotional facial expressions.  Similarly, NK and the controls were asked to match the 6 emotions to non-verbal sounds.  Compared to controls, NK showed reduced recognition of the disgust (retching) and surprise vocal sounds.  In fact, he labeled the retching sounds as fear or sadness.

Some interesting work has also compared people with the HD+ gene to people with the HD – gene.  HD+ represents individuals who have the Huntington’s disease gene, but have not yet experienced the onset of the disease.  HD- represents individuals who do not have the gene.  Compared to HD- individuals, HD+ individuals demonstrate impairment in recognizing disgust facial expressions, but do NOT show impairment in identifying disgust vocal sounds (Sprengelmeyer et al., 2006).  Why is this important?  Well, first, doctors are now using inability to recognize disgust faces as a screen for HD.  Second, this suggests early damage to the insula/putamen first impacts recognizing faces, and is later followed by vocal sounds.  Similar work has found that in healthy participants, the volume size of the putamen is negatively correlated with accurately identifying fear expressions n Ekman and Friesen’s (1978) FACS procedures (Uono et al., 2017).

The Hate Circuit.  The hate circuit represents three brain structures (insula, putamen, frontal cortex) hypothesized to underlie the experience of the emotion hate.  While in an fMRI machine, participants viewed photos of 1 person they hated and 3 neutral acquaintances (a within-subjects IV; Zeki & Romaya, 2008).  The dependent variables were the amount of activation in the three brain structures.  Results showed that these three brain structures showed greater activation while viewing the “hated” individuals than the neutral acquaintances.  In addition, participants’ self-reported amount of hate was positively correlated with activation in these three structures!  So, if people reported high levels of hate, they in turn showed high levels of activation!  It Is interesting to note that Bartels & Zeki (2000) has identified a romantic love circuit which also includes the putamen and insula.  So, we cannot say the putamen and insula are related only to hate.  But, it might be that the putamen becomes activated when preparing to cope with or respond to an emotionally-charged individual -whether hate or love. Another question to consider is whether hate really is a separate emotion – or is it similar to moral disgust?  It would be interesting to know whether the participants despised these hated individuals because the individuals had committed a moral violation.  In fact, in this article in NewScientist.com, author David Robson (2008, no page number) interviewed the author, Zeki, and states:

“Zeki suggests similar brain scans could one day be used in court – for example, to assess whether a murder suspect felt a lot of hatred towards the victim.”

What do you think about the justice system admitting activation in the hate circuit as evidence for as suspects’ motivation to commit murder?

Discriminable Patterns for anger are shown in Table 16. These findings indicate that compared to other emotions, disgust resulted in more activation in the right putamen and/or left insula.

Table 16
Discriminable Patterns for Disgust from Vytal and Hamann (2010)