William James and Carl Lange developed two early theories on emotion around the same time.  James was born in New York City and received a medical degree but never practiced medicine.  Instead, he started teaching university psychology courses and is now considered one of the founders of psychology.  James’ brother, Henry James, was a novelist and wrote The Portrait of a Lady.  For more information on William James’, see this link.  In 1884, James published an article entitled “What Is an Emotion?” Carl Lange was a Danish medical doctor (who looks like actor Jude Law!).  His research focused on neurological complications and eventually in 1885 he published a book called “On Emotions: A Psycho-Physiological Study.”  James (1884) and Lange (1885) proposed similar theories on the function of an emotion.  Eventually, their ideas were combined into one overarching theory called “James-Lange Theory.”

The foundation of James-Lange theory is evolutionary theory.  Influenced by Darwin, both James and Lange assumed that emotions were developed to solve adaptive problems and thus, emotions function to increase the survival of our genes.  James-Lange Theory proposes that emotions are essentially the way our physical body reacts to an eliciting event.  Further, emotion labels (e.g., fear, disgust, anger) are labels that we use to describe the way our body changes after the eliciting event occurs.  Specifically, James-Lange posits that we first notice physiological and behavior changes and we use our observation of these changes to label our emotion.  According to James-Lange, our subjective feelings, not our cognitive appraisals,  represent the perception of the body’s behavior and physiological changes. For instance, you might notice your heart rate increase (physiological change) and see yourself attacking (a behavior change), and therefore conclude that you must be angry.  A sensation from our muscles or our internal organs is a requirement for an emotion to occur.  In fact, James believed that our sensations were positively correlated with the feeling of emotion – such that as our bodily sensations decrease, our emotional experience decreases at the same time.  Today, we know this statement is incorrect.  Some positive emotions (e.g., contentment) and negative emotions (e.g., sadness) emotions are associated with low levels of sensation or arousal.

In the following section, we will use the graphical representation in Figure 1 to break-down James-Lange theory.  Pay attention to the order of the emotion components as hypothesized by this theory. 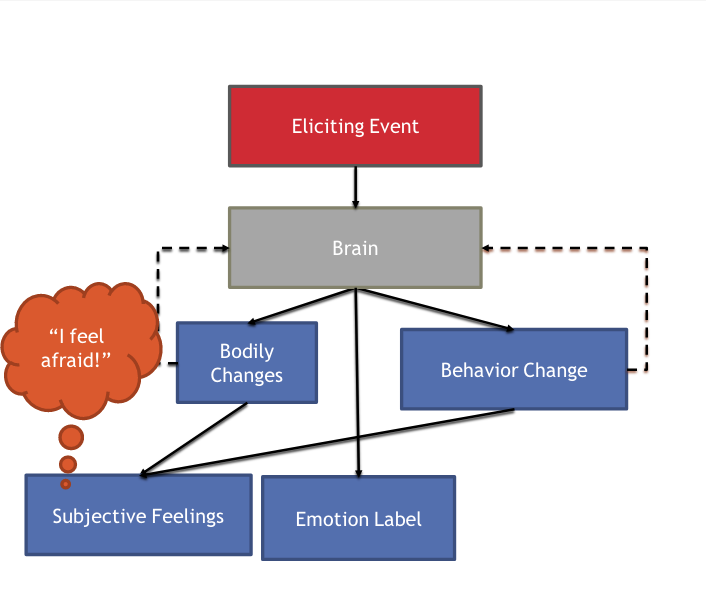 As shown below, when the eliciting events occurs (such as the presence of a bear), the brain quickly and automatically perceives the change in the environment.

Then, the brain triggers bodily and behavior changes, as shown below.  James and Lange used the term “bodily changes” to represent physiological changes, not changes in behavior such as facial expressions and approach/avoidance movements.  According to this theory, bodily changes occur within our organs such as the stomach and liver.  This is correct – today we would conceptualize these internal changes as changes in our sympathetic and parasympathetic nervous systems.  In addition, they hypothesize that behavior changes are automatic and reflex-like — at this point in the emotion episode we do not have time to consciously think about how we should react to the bear.

In the above figure, feedback loops are represented by the dotted lines.  These feedback loops suggest that information about automatic bodily (physiology) and behavior changes is quickly and non-consciously communicated back to the brain.  This communication between our body and brain occurs before we can consciously label the emotion.

After the brain receives information on the bodily and behavior changes, then we can consciously label the emotion, as shown below.  For James-Lange, the emotion label is caused by our perceptions of our body’s responses (both physiological and behavioral) to the event.  One of the major tenets of this theory is that emotions are labels we give to the way the body (both physiologically and behaviorally) reacts to certain situations.  For example, you notice yourself sweating and running away, and eventually you consciously think, “I’m sweating and running away, so my emotion must be fear.”

The figure below provides an example of how James-Lange would describe the presence of a bear causing the emotion fear.So, for James-Lange, to experience an emotion, bodily and behavior changes are required. You might notice that James-Lange did not discuss cognitive appraisals.  This was one of the criticisms of their theory.  At the time of the theories, people pointed out that the feedback loops sounded like a quick, nonconscious cognitive appraisal. Today, we know that cognitive appraisal can occur at both the automatic and conscious levels

Strengths and Weaknesses of James-Lange Theory

An obvious strength is that James and Lange were the first individuals to consider the causes of our emotion labels (although Darwin had already discussed emotions as adaptive in animals).  In addition, they were the first to speak of bodily and behavior changes as separate causes of an emotion.

Major critics of James-Lange Theory were Cannon (1927) and Bard (1934).  At a similar time in history, they were developing a different theory of emotion.  One criticism they posed was that bodily changes (remember those are physiological changes!) occur slower than the conscious feeling experience of an emotion.  Cannon and Bard believed physiological and behavior changes could occur after we already have the subjective feeling.  Based on this assumption, Cannon and Bard stated that bodily changes in our organs cannot determine the emotion label.  Instead, they believed our interpretation or perception of the eliciting event is the stronger determination of the emotion label.  Cannon and Bard were the first to suggest that our cognitive appraisal – our interpretation of the eliciting event – is important for understanding our emotional experience.  Cannon and Bard also pointed out that specific bodily changes may not match specific emotions. For instance, we might experience our stomach tighten (a physiological change) when we are scared or excited.  We might exhibit approach behavior when we love someone and when we are angry toward someone.  So, we know today, that we cannot use one physiological or behavior change to identify our emotion.

Another weakness of James-Lange theory is  that they confused two of the emotion components – subjective feelings and cognitive appraisals.  It was not until after James-Lange Theory was developed, that psychologists discussed these two terms as separate components of emotion.