Hunsinger et al., (2012) tested their hypothesis with three studies.  We will discuss study 3 only.  In study 3, all participants first completed a survey.  ½ participants were randomly assigned to completed surveys scented with a pleasant fragrance, while the other ½ of the participants completed fragrance-free surveys.

Before discussing the results, some clarification is required.  The impression formation task assumes that people stereotype librarians as introverted and salespeople as extraverted.  Thus, people’s default thinking style is considered broad and general.  When relying on general stereotypes, people would rate the personality of Carol the librarian as introverted and Carol the salesperson as extraverted, even though the story about Carol includes the same exact behaviors.  In this study, the no-fragrance condition is assumed to cause default broad thinking that relies on stereotypes.  Conversely, the fragrance condition should cause people to focus on their immediate environment and narrow the attention on the fragrance and this narrowed attention is assumed to be carried over to focusing on Carol’s specific behaviors.

Hypothesis 1 – Fragrance Condition: The fragrance condition will cause people to narrow their thinking to the current external environment and in turn, to evaluate the specific behaviors of Carol (not the stereotypes).  Paying attention to details such as Carol’s specific behaviors will make participants less likely to rely on their default stereotypes and more likely to rely on the behaviors listed in the story.  Because happy people maintain their current thinking, happy people will continue to focus on the specific behaviors and should rate Carol the librarian as having the same personality as Carol the salesperson (because the description included 15 introverted and 15 extraverted behaviors).  Conversely, sad people should change cognitive evaluations of Carol from detailed to more general stereotypes.   Thus, sad people should view Carol the librarian as introverted and Carol the salesperson as Extraverted.  This exact finding is displayed in Figure 36 Part B.

Hypothesis 2 – The No Fragrance Condition: The no-fragrance condition will cause people to rely on their default stereotypes.  Because happy people maintain their current thinking and sad people change their thinking, in the no-fragrance condition happy people should rely on broad stereotypes and rate Carol the salesperson as more Extraverted than Carol the librarian.  Because sad people change their current thinking style, they should be less likely to rely on stereotypes and more likely to focus on the behaviors in the description of Carol.  Thus, in the no-fragrance condition sad people should show no differences in the traits they rate for the librarian and salesperson.  This exact finding is displayed in Figure 36 Part A. 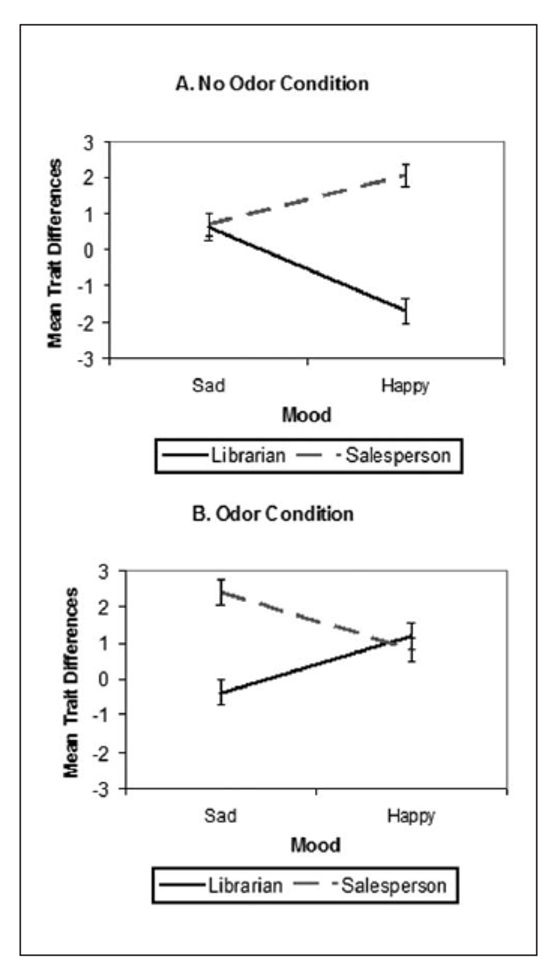 Both these theories share similarities and differences, which I describe below.