Does S.M. know the events that cause fear and how our emotion components change during fear? When asked, she correctly identifies the eliciting events that elicit fear such as being threatened and being alone in a dark alley at night (Adolphs, 1995). And she states that when people experience fear their heart pounds and they scream and run away, suggesting she understands the behavior and physiological changes caused by fear. Finally, when asked to sort emotion words based on similarity, she placed afraid, scared, worried, terrified, and alarmed into the same group (Adolphs, 1995). So, it appears that S.M. understands and remembers the characteristics of a fear experience, yet her body and brain do not respond in such a way to identify fear in facial expressions or to avoid dangerous situations. S.M. has been mugged in the same parking lot two times – suggesting that even though she can explicitly identify the eliciting events, she has not learned to avoid dangerous situations.  Patients with amygdala damage report feeling fear normally, suggesting that their subjective feelings should not differ from control participants. But how do we know their fear is the same as our fear?

S.M. and control participants rated seven facial expressions (happiness, surprise, fear, anger, disgust, sadness, and neutral), along Russell’s (1980) arousal and valence dimensions (Adolphs, Russell, et al., 1999). Compared to the normal controls, S.M. reported the same valence, but different arousal ratings for the facial expressions (see Figure 14). In particular, S.M. rated facial expressions of fear, anger, disgust, and sadness as significantly lower in arousal than control subjects. Similar findings showing deficits in arousal, but not valence, were obtained when S.M. and control participants rated emotion stories and words (Figure 15). As we discussed in an earlier section on IAPS photos, highly unpleasant photos are typically rated as arousing, but S.M. did not demonstrate this correlation. 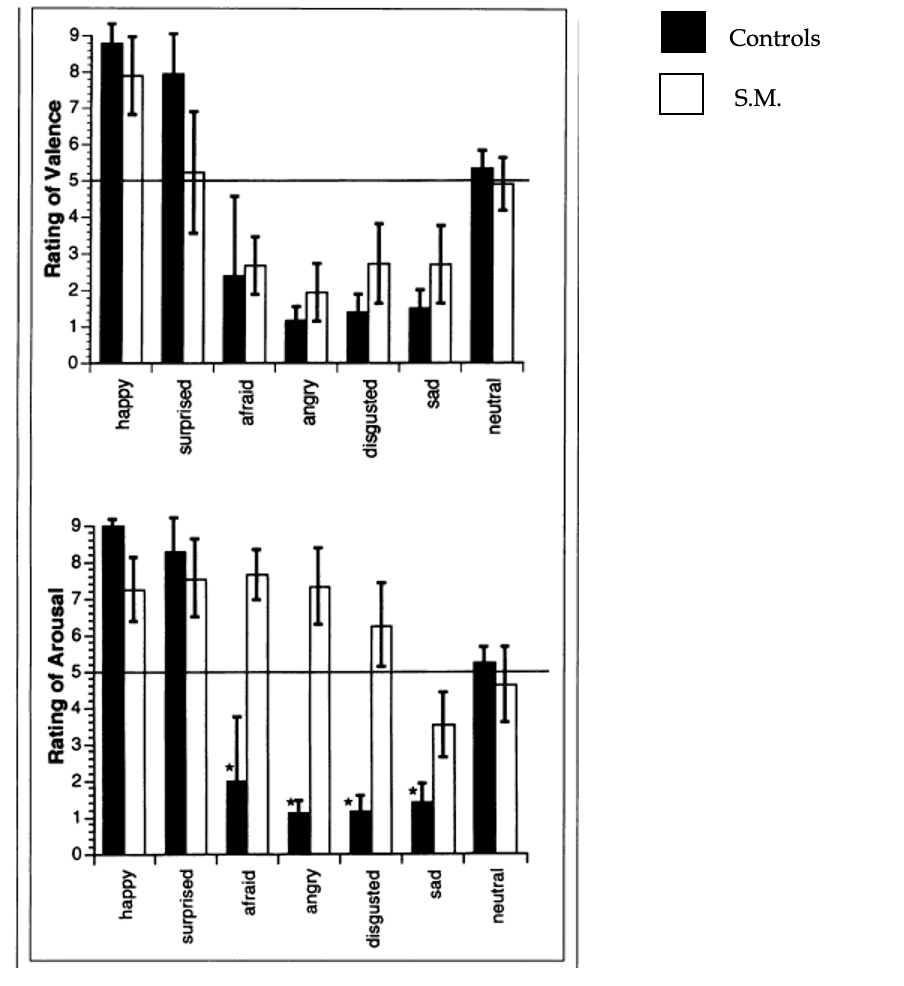 Figure 15
Valence and Arousal Ratings of Emotion Sentences and Words 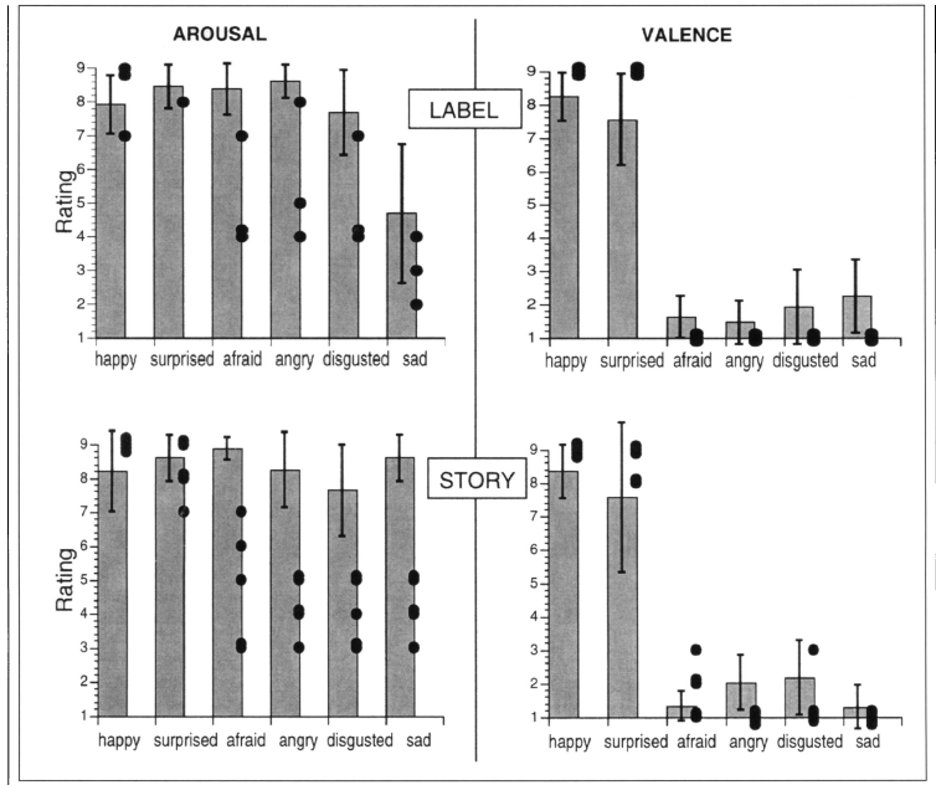 Note. The dot represents S.M.’s ratings over three trials. The bars represent the average scores of the control participants. Reproduced from “A role for the human amygdala in recognizing emotional arousal from unpleasant stimuli,” by R. Adolphs, J.A., Russell, and D. Tranel, 1999, Psychological Science, 10(2), p. 170, (https://doi.org/10.1111/1467-9280.00126). Copyright 1999 by the American Psychological Society

In another study (Anderson & Phelps, 2002), participants completed the PANAS (Watson et al., 1998) by considering their emotions over the past month. Participants included normal controls, a group of unilateral damaged participants, and a bilateral amygdala damaged patient named S.P. As shown in Figure 16, all participants reported more positive than negative affect over the 1-month period. Further, the groups did not show differences in 1) the arousal of PA and NA or 2) the number of PA and NA emotions reported. This study suggests amygdala damage does not alter people’s conscious, subjective feelings. One reason contradictory findings might exist is because participants in the PANAS study reported their emotions over a long period – which measures more of a trait than state emotion. Second, the Adolphs, Russell, et al. (1999) study looked at deficits in identifying facial expressions, whereas the PANAS study investigated subjective feelings. So, it might be that the amygdala controls our ability to identify emotional expressions in others but does not control our subjective feelings.  Or the amygdala damage impacts our interpretation of the facial expressions, but now how we feel during fear. 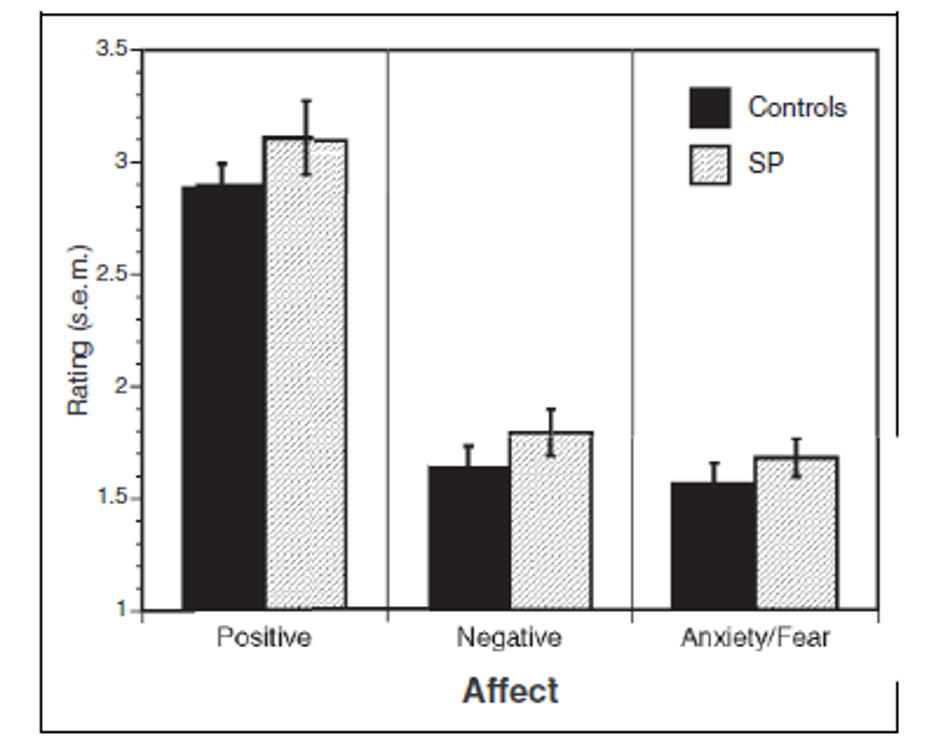 Note. S.P. has bilateral amygdala damage. Reproduced from “Is the human amygdala critical for the subjective experience of emotion? Evidence of intact dispositional affect in patients with amygdala lesions,” by A.K. Anderson and E.A. Phelps, 2002, Journal of Cognitive Neuroscience, 14(5), p. 713, (https://doi.org/10.1162/08989290260138618). Copyright 2002 Massachusetts Institute of Technology.