Gendron, Roberson, van der Vyver, and Barrett (2014a) conducted a similar study, but changed the methodology to address limitations with Sauter et al. (2010). (Note: Lisa Barrett, a social constructivist, was an author on this study). Participants were recruited from the Himba tribe and from Boston. Participants listened to vocal sounds from male and female native English speakers, then verbally provided one word or phrase to identify the emotion. Thus, in this study, participants were not provided two choices from which to select. Below are the vocal sounds that represented each emotion.

Vocal Sounds and Corresponding Emotion from Gendron et al. (2014a)

Here is an audio clip describing her study. 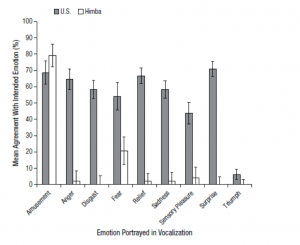