Like with fear, the amygdala is often activated for anger experiences.  Lesions of the amygdala cause changes in social dominance hierarchies, such that previously high-status monkeys become lower in status after the lesion (Rosvold et al., 1954).  But, other times, Klüver -Bucy Syndrome (Klüver & Bucy, 1939) in monkeys makes the monkey act tame, even though the situation would typically elicit aggression.  Thus, lesions impair the normal anger behavior changes, sometimes resulting in patterns that are opposite the expected patterns for anger. Some recent work is suggesting that the amygdala plays an important role in regulating anger and aggression.  Lesions to the human amygdala both increased and decreased aggression (for a review, Haller, 2018; van Elst et al., 2000).  Taken together, damage to the amygdala suggests that this structure regulates behavior changes during an anger experience – either by increasing aggressive approach or down-regulating aggression.  Some work (Matthies et al., 2012) has found that amygdala volume and trait aggression are negatively correlated.  This means that as the amygdala volume decreases, people exhibit greater levels of an aggressive personality trait.  Research on mice, voles, hamsters, and even lizards suggests that different parts of the amygdala may be specific to different types of aggression (for a review, see Haller, 2018).  For instance, the medial amygdala is activated for male rivalry aggression to acquire dominance (activated with the intruder  test discussed in fear), the central amygdala for predatory aggression, and maternal aggression activated both the medial and central amygdala.

The orbitofrontal cortex (OFC) is located in the prefrontal cortex. The OFC is activated when viewing anger facial expressions, highlighting the role of anger perception (Blair et al., 1999), and this activation increases as the intensity of the anger expression increases.  Damage to the OFC is associated with 1) impairment in identifying negative, but not positive emotion facial expressions, 2) difficulty identifying the intensity of emotions on facial expressions, and 3) greater reactive aggression (Blair, 2012; Blair & Cipolotti, 2000; Dal Monte et al., 2013; Heberlein, et al., 2008; Marinkovic et al., 2000; Zald & Andreotti, 2010).  A recent study (Willis et al., 2014) found that OFC damaged-patients experienced difficulty recognizing emotions of faces in the first 500 ms that a photo was shown but were able to eventually correctly identify the emotion.  These findings suggest that impairments may occur at a more nonconscious level.  Studies on normal populations have shown that as the OFC shows greater activation to angry faces, people exhibit reduced aggressive behavior (Beyer et al, 2015).  These findings would suggest that for normal functioning individuals, when we experience anger, the OFC helps us to regulate our aggressive approach behaviors.

Activation of the OFC is negatively correlated with aggressive behavior.  But remember when we view an anger expression on another person’s face, that might cause us to experience fear.  Taken together, these findings might suggest that the OFC helps us to perceive anger in others, to down-regulate our anger/aggression, and maybe even to engage in fear avoidance.  Paralleling findings on the ventral striatum, lesions to the OFC hinder recognition of anger facial expressions and can also increase aggressive behavior. Said another way, if the OFC is not normally operating, then we might fail to perceive anger and our OFC cannot regulate our anger expression.

In the 1960’s, Reynolds (1969) accidentally learned that stimulating the PAG in rats allowed him to perform surgery on the rats without using anesthetics.  This was the first study to notice the role of the PAG in reducing pain.  The PAG also regulates other physiological responses during an emotion, such as the heart rate or blood pressure. Siegel et al. (1999) discusses that electrically stimulating the hypothalamus and PAG results in aggression in cats.

The ventral striatum is located in the basal ganglia and is considered part of the brain’s reward circuit.  This reward circuit contains high levels of dopamine, so often these structures are activated when people anticipate upcoming rewards.  When people recalled and described personal stories of anger, the ventral striatum was activated (Hornak et al., 2003).  While describing these stories, participants reported angry subjective feelings, suggesting the ventral striatum is activated when we experience anger.  In one study (Hornak et al., 2003), participants recalled times that they felt angry and rated their subjective feelings, all while an fMRI scanned their brain.  Findings showed that self-reported feelings of anger were positively correlated with activity in the reward circuit.  BUT the problem is that self-reported positive emotions are also positively correlated with activity in the same areas.  So, we cannot say that the ventral striatum controls only specific positive or negative emotions.  It is more likely that activity is this area is associated with approach emotions.  Damage to the ventral striatum (Calder et al., 2004) or interfering with the dopamine receptors (Lawrence et al., 2002) hinders people’s ability to recognize anger in facial expressions.  Taken together, these findings indicate the ventral striatum regulates approach behavior and controls ability to perceive anger in others.  Furthers, some believe that the ventral striatum may be activated for instrumental aggression, when we are approaching a goal, and may be less related to reactive aggression due to a threat.

The warrior gene is the everyday term used to describe the presence of a polymorphism on the enzyme monoamine oxidase A (MAOA). This polymorphism is called low activity (L) variant of monoamine oxidase A (MAOA).  A similar genetic mutation was originally discovered in a Dutch family in which many male relatives had a history of violence, extended periods of anger, and low levels of IQ (Bruner, 1993a; for more information, Brunner et al., 1993b).  MAOA is an enzyme that controls the levels  of other neurotransmitters and hormones.  If a person does not have enough MAOA, they could end up with too much of the neurotransmitter or hormone.  With the presence of the L variant, people do not have enough MAOA and end up with too much dopamine or testosterone, thus resulting in a tendency for “warrior-like behavior” or aggression.   Conversely, with the high (H) variant of MAOA people exhibit adequate or normal levels of MAOA.  So, technically, this warrior gene is one cause of an angry or aggressive personality – such that people with this gene tend to experience more anger across situations and over time.  The L variant is coded on the X chromosome, thus men, more than women, tend to express the L variant.  This is because men only have one X chromosome, whereas women have two X chromosomes – meaning if a woman has an L variant on one X chromosome her other X chromosome can counteract the effect.

Further work has found that the presence of this gene combined with specific situations together causes the highest levels of aggression (called a gene X environment interaction).  For instance, children with the L variant of MAOA and who had been maltreated showed more antisocial behavior than children with the L variant but no neglect, or children who were neglected but did not have the L variant (Caspi et al., 2002).  Other work has found that when participants were excluded in a cyberball game, those participants who took the most points away from another player (a form of aggression) are those with the L variant (Gallardo-Pujol et al., 2013).  These findings were not found when participants were included in the game – suggesting the interaction is between the eliciting event (inclusion or exclusion) and biology. Another interesting study (Meyer-Lindenberg et al., 2006) found that when people with the L variant viewed angry and fearful faces, L carriers showed more amygdala activation and less orbitofrontal activation than H variant carriers. This study also looked at how the volume of the amygdala, OFC, cingulate cortex differed for men and women with the L variant. Two important results were found: 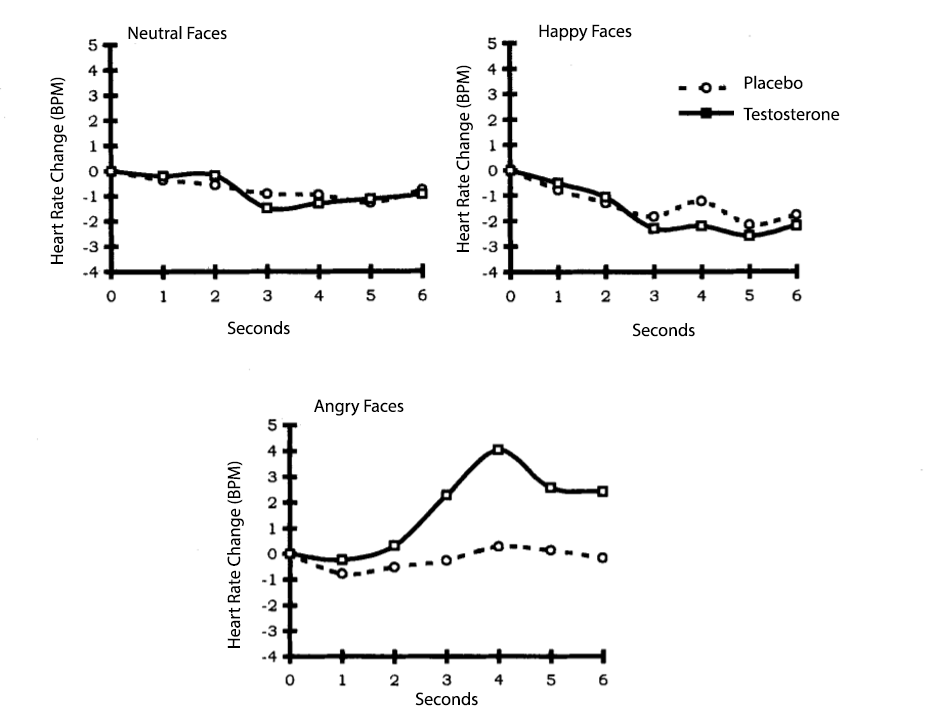 Note: Some of the emotional changes are used in more than one place, and you can drag more than one element into the drop zones on the right. Additionally, penalties have been turned on for this activity, resulting in a deduction of 1 point for missing or incorrectly dropped text.

Discriminable Patterns for anger are shown in Table 4. These findings indicate that compared to other emotions, anger resulted in more activation of the IFG and right PHG, thus paralleling consistency results. The IFG in BA 47 is activated when people view angry, disgusted, and fearful facial expressions (as compared to neutral faces), suggesting a role in perceiving negative emotions (Sprengelmeyer et al., 1998). Damage to the IFG resulted in increased aggression, demonstrating that like the OFC, the IFG might also help down-regulate aggressive behaviors during an anger experience (Grafman et al., 1996). Less work exists on the relationship between the PHG and emotion broadly. One study found that when participants listened to music that became more dissonant, their PHG increased in activation (Blood, 1999). A more recent study found that listening to dissonant (vs. consonant) music resulted in activation in the amygdala, hippocampus, and PHG, while listening to consonant (vs. dissonant music) resulted in activation in the IFG, and ventral striatum (Koelsch et al., 2006). Taken together, these findings suggest that the PHG is activated for unpleasant valence. Another meta-analysis found the lateral (OFC) was most often activated during anger (Murphy et al., 2003) 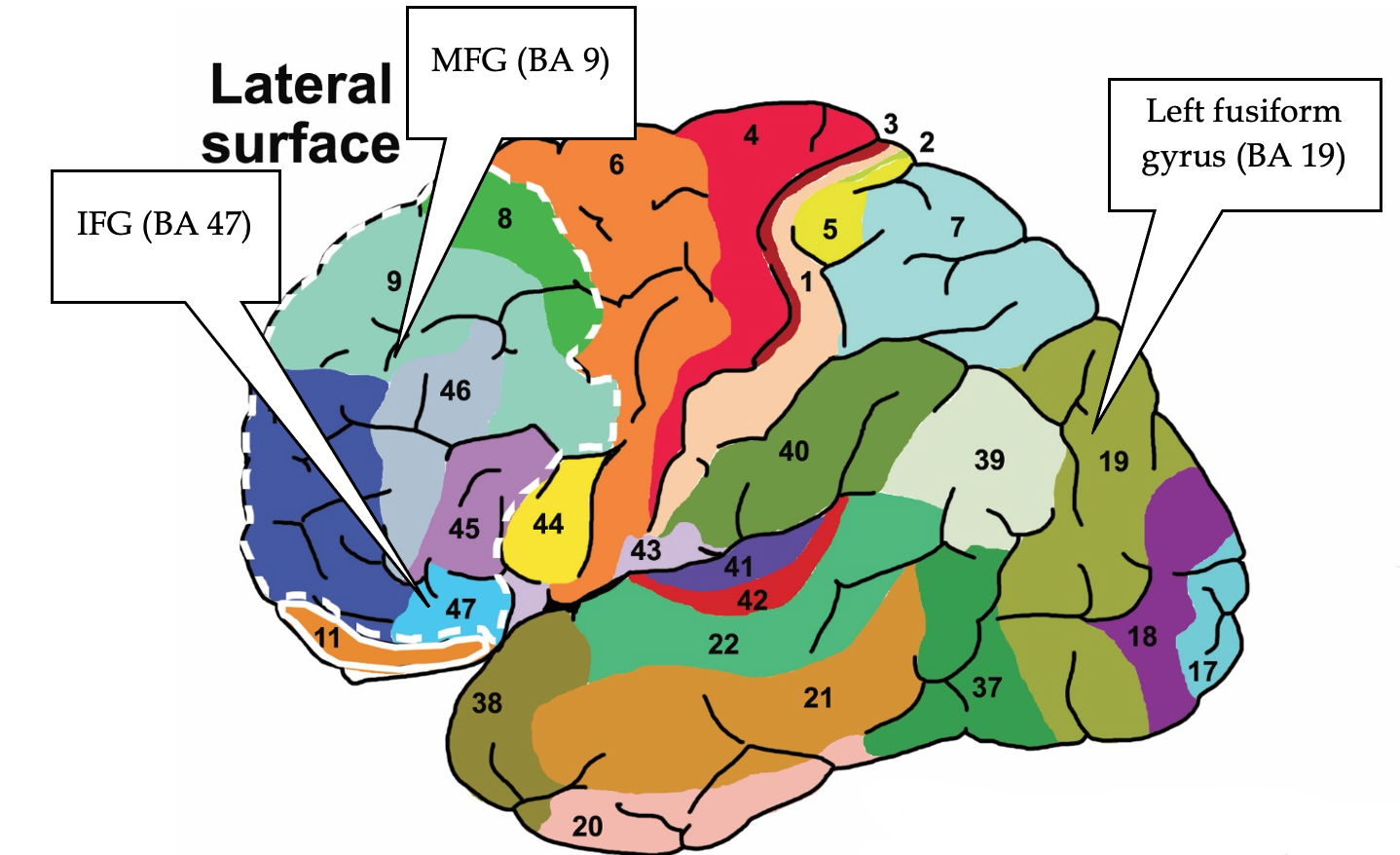 Note. Lateral is an outer view of the brain. Medial is a side view of the brain with the right and left side of the lateral brain divided in half. Reproduced from “Brodmann Areas” by Vysha, 2013. Open Access, Creative Commons CC0 1.0 Universal Public Domain Dedication. Retrieved from https://commons.wikimedia.org/wiki/File:Brodmann_areas.jpg