Below is a summary of themes that were found in more than one emotion.

Other work (Keltner & Haidt, 2003; Shiota et al., 2007)) suggests that awe is defined by two unique cognitive appraisals.  These appraisals are vastness – feeling small in comparison to something larger in one’s environment and accommodation – changing one’s cognitive schemas to account for new information.

Means (see Table 3), collapsed across all world regions, show that participants reported the following appraisals when recalling a joy experience: a little expectedness, pleasantness, goal conduciveness, not unfair, external causation: close others; coping: no action required; moral, and an increase self-esteem.  In Figure 1, we can see that the cognitive appraisal patterns for joy are universal across all world regions (Note: the presence of a circle around a datapoint indicates that the country with the circle showed means significantly different from the mean of the remainder of the sample; circles are not shown in this figure).  Recall that in Scherer (1997) the only emotion to show universality across the eight appraisal dimensions was joy! 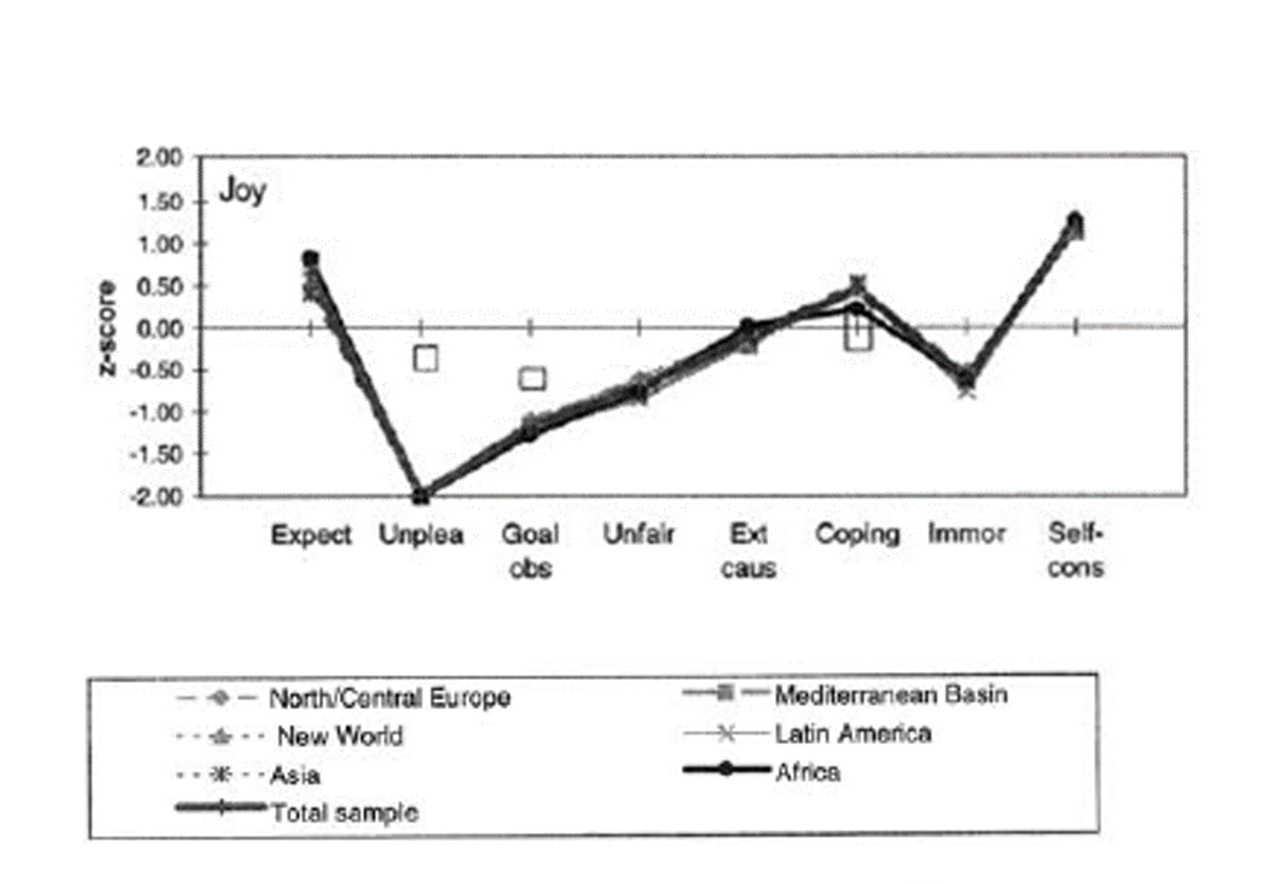 Note. Presence of a circle around a datapoint indicates that the country with the circle showed means significantly different from the mean of the remainder of the sample.  Adapted from “The Role of Culture in Emotion-Antecedent Appraisal,” by K.R. Scherer, 1997, Journal of Personality and Social Psychology, 73(5), p. 912, (https://doi.org/10.1037/0022-3514.73.5.902). Copyright 1997 by the American Psychological Association.

In a study by Tong (2014), American and Singaporean undergraduate students recalled and described a personal experience of one randomly selected emotion. Then, participants rated each emotion along the below 13 cognitive appraisals.

For each cognitive appraisal, select the positive emotion that would cause this specific appraisal and drag it into the corresponding cognitive appraisals drop box. Incorrect answers apply a penalty, and are shown when you submit to check your answers.

Table 5 below displays cognitive appraisals participants reported for each of the 13 emotions. It is important to note that these ratings did not significantly differ for Singaporean and American students – providing initial evidence of universality.

The conceptual maps below show how each of the 13 emotions were rated along the appraisals external influence and achievement (Figure 2) and difficulty and clarity (Figure 3). Based on the ratings, do you think any positive emotions might be the same emotions? Which ones? Keep in mind that there are more cognitive appraisals than those tested in this study, and we are only looking at one emotion component. We would have to investigate physiology, facial expressions, etc., to really determine whether two positive emotions represent the same construct.

An earlier study (Smith & Ellsworth, 1985), similar to Tong, asked participants to recall 15 different positive and negative emotions.  For each emotion, participants rated their cognitive appraisals. The six appraisal dimensions identified in this study are defined in Table 6.

Adapted from “Patterns of cognitive appraisal in emotion” by C.A. Smith and P.C. Ellsworth, 1985, Journal of Personality and Social Psychology, 48(4), p. 822. Copyright 1985 by the American Psychological Association.

The three figures below show the location of positive and negative emotions for a combination of appraisal patterns.  Based on these figures, please note a few take-home points:

Location of Positive and Negative Emotions along Situation-Human Control and Perceptions of Control – Self Vs. Other