In a more recent study (Park et al., 2014), researchers investigated how confrontation in writing reduces the impact of test anxiety or math performance. Procedures are depicted in Figure 7 and the variables included are described below.

Math Anxiety Quasi-IV:  Before the laboratory study, participants completed a self-report prescreen measure on their anxiety toward math tests.  Based on their scores, students were divided into High Math Anxiety (HMA) or Low Math Anxiety (LMA) participant groups.

“Please take the next 7 minutes to write as openly as possible about your thoughts and feelings regarding the math problems you are about to perform on the Excel spreadsheet. In your writing, I want you to really let yourself go and explore your emotions and thoughts as you are getting ready to start the second set of math problems. You might relate your current thoughts to the way you have felt during other similar situations at school or in other situations in your life. Please try to be as open as possible as you write about your thoughts at this time. Remember, there will be no identifying information on your essay. None of the experimenters, including me, can link your writing to you. Press the enter key at the end of every sentence to start a new sentence in the next row. When I knock on the door please stop writing and cover up the text so that I can’t see what you wrote.”

After both groups waited 7 minutes, they completed the math exam.

For the procedures, all participants first completed a practice math test meant to increase their anxiety on the test.  Then, participants were divided into the control or expressive writing group.

Composite Math Performance Dependent Variable:  Math performance was measured as error rates.  An error rate occurs when participants select the wrong answer – either by indicating the answer was correct when it was actually wrong OR the answer was wrong when it was actually correct.  Beyond performance, researchers measured participants’ reaction time to correct answers.  Shorter times indicated participants were faster to indicate whether the math answer was wrong or right.  Researchers created a composite math performance score.  For this composite, higher numbers indicate poorer performance.  In other words, higher numbers indicate the participant had many errors and had a slow reaction time.

As indicated by the arrow in Figure 8, high math anxiety participants performed significantly better on the exam after writing versus doing nothing before the exam.  This finding is important because it shows that writing doesn’t just eliminate the gap between anxious and non-anxious students, but writing will also improve the performance on the test. 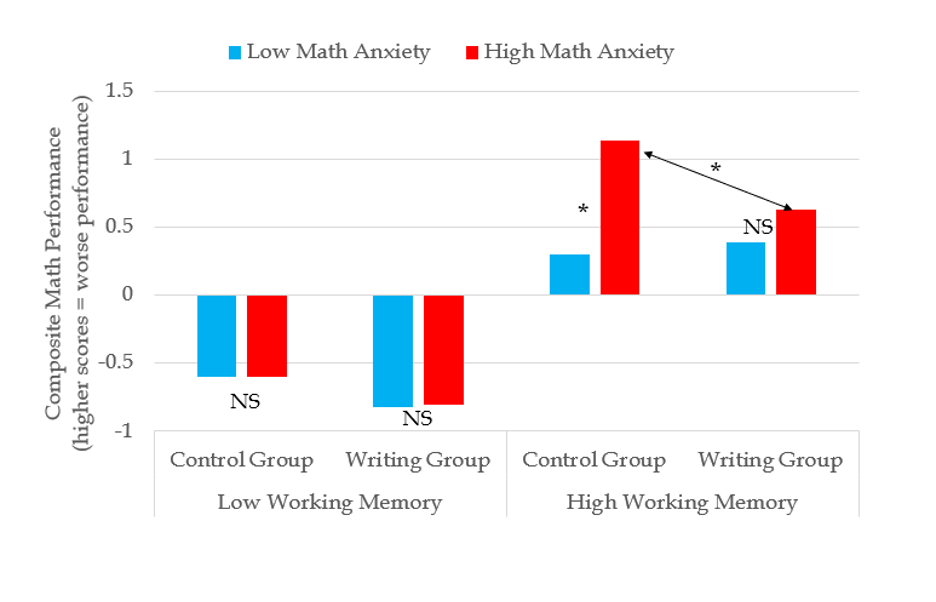 Now, let’s look at the left portion of Figure 8.  The left position represents low working memory math problems – those problems that are easier and thus require less working memory.  For both the control and writing groups, we do not see significant differences between low and high math anxiety participants.  In other words, all four participants groups are performing well on the simple math problems.  Why is this important?  Well, these nonsignificant findings tell us that math anxiety is more detrimental to performance on tasks that requires LOTS OF working memory.  In other words, it’s not that test anxiety is going to affect performance on every single test and problem.  Test anxiety is going to affect performance on DIFFICULT problems that require more working memory and more time to answer the problem.

These nonsignificant findings also give us some information about why confronting our emotional feelings and thoughts is a successful emotion regulation strategy.  With confrontation, we are thinking about and processing our thoughts and feelings about the eliciting event – in this case the exam.  What seems to be happening is that participants experiencing test anxiety are ruminating about their anxiety and negative emotions while taking the exam – which requires attentional resources.  Because of the rumination, participants have less working memory capacity to actually think about the questions.  By encouraging an effective regulation strategy before the exam, that frees up working memory space to actually focus on the math problems.  As a note, work also suggests simply engaging in the type of thinking in these studies results in similar benefits (Rivkin & Taylor, 1999).  In this study, participants were asked to think about a current stressor in their lives.  Then, students were randomly assigned to think about and visualize their emotions about this event, to simulate ways to resolve the stressor, or a control group not given instructions. Participants who visualized their emotions reported more positive emotions, more active coping and better psychological well-being right after the manipulation and up to 1 week later.   Interestingly, differences in physical symptoms were not found between groups.