Berkowitz (1989) developed his CNA model as a modification to the Frustration-Aggression Hypothesis.  The main premise of the CNA model is that negative affect is the main cause of anger and affective aggression.  Berkowitz has found that in lab and naturalistic studies, when participants experience more unpleasant events, they report more anger (see Berkowitz, 2012; Berkowitz & Harmon-Jones, 2004).  Further, when we experience a frustration combined with positive emotions, our experience of anger decreases (see Berkowitz, 2012; Berkowitz & Harmon-Jones, 2004).  Berkowitz has also evaluated which cognitive appraisals are the strongest and found that negative affect is a better predictor of anger than goal obstruction and perceptions of control (see Berkowitz, 2012; Berkowitz & Harmon-Jones, 2004).  So, Berkowitz states that the ONLY required cognitive appraisal for anger is unpleasantness.  Although other appraisals like goal obstruction and perceptions of control could cause anger, they are NOT REQUIRED.  A second suggestion from Berkowitz is that English words like irritation, annoyance, and rage all represent different intensities of the same anger emotion. 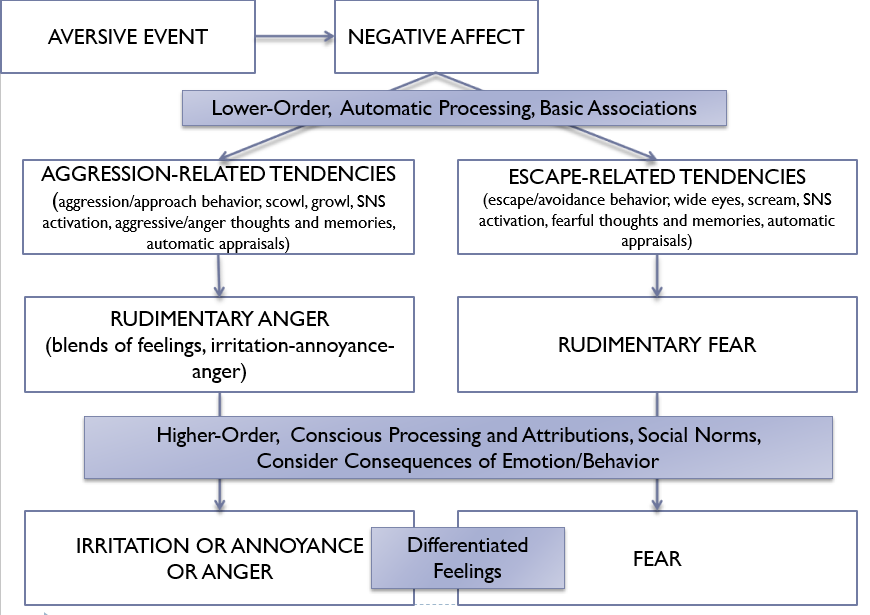 Berkowitz agrees with the Frustration-Aggression Hypothesis in that a frustration does sometimes cause anger.  But he doesn’t believe that a frustration is a required prerequisite to anger.  In his CNA model (see Figure 8), the aversive event represents the eliciting event.  According to Berkowitz, this aversive event must cause negative affect for anger and aggression to occur.  Negative affect is the same thing as saying unpleasantness or any negative emotion.  Thus, the aversive event could be hunger, foul odors, high room temperature, disgusting scenes, or even a goal obstruction. But, Berkowitz states, a goal obstruction only causes anger if the goal blockage makes us feel negative.  This aversive event causes certain automatic processes called associative networks. We have associative networks for many emotions – anger, fear, sadness, etc.  Associative networks include the following:

He calls these basic associations or associative networks because any one emotion component can activate the other emotion components in an automatic way.  For instance, feeling negative could cause angry memories, an anger facial expression, and increase in physiological arousal. Or as suggested by the facial feedback hypothesis, displaying an anger face could result in physiological arousal and feelings of anger. Associative networks are “Lower-order, Primitive Processing, Basic Associations.”  Berkowitz labels two of these associated networks “Aggression-Related Tendencies” and “Escape-Related Tendencies,” although there could be others.  According to Berkowitz, both flight and aggression associative networks are activated at the same time.  In other words, we have both an automatic desire to escape the aversive stimulus and to approach and terminate the aversive stimulus.  At this point in the model, we cannot state whether the emotion is anger or fear or some other emotion.  Berkowitz states that situational cues may determine whether we experience anger, fear, or another emotion. For instance, his work shows that viewing angry faces (Berkowitz, 1993) or nonconsciously seeing a weapon (called weapons effect; Anderson et al., 1996; Berkowitz & LePage, 1967) increases anger and aggressive related tendencies.

Berkowitz has conducted many studies to show that general unpleasantness activates the anger associative network (for a review, see Berkowitz, 2012 or Berkowitz & Harmon-Jones, 2004).  In one of his classic studies (Berkowitz et al., 1981), a cold-stressor procedure was used to cause unpleasantness to female participants.  ½ of the females were told to keep their hand in extremely cold water or lukewarm water. While their hand was in the water, participants evaluated a female confederate’s solutions to a problem-solving task.  A second manipulation was whether participants were told a punishment to the confederate would be helpful or harmful.  In the helpful condition, participants were informed punishment would be helpful and motivate the female to improve.  Whereas, the other ½ were told the punishment would be harmful by interrupting the female confederate’s thought processes.  A high amount of punishments or low amount of rewards can both be considered forms of hostile aggression.  After hearing the confederate’s staged solution, participants selected how much reward and punishment to give the female.  Rewards were monetary and punishment was an aversive blast of noise.

Amount of Rewards and Punishments Given to Confederate (Berkowitz et al., 1981) 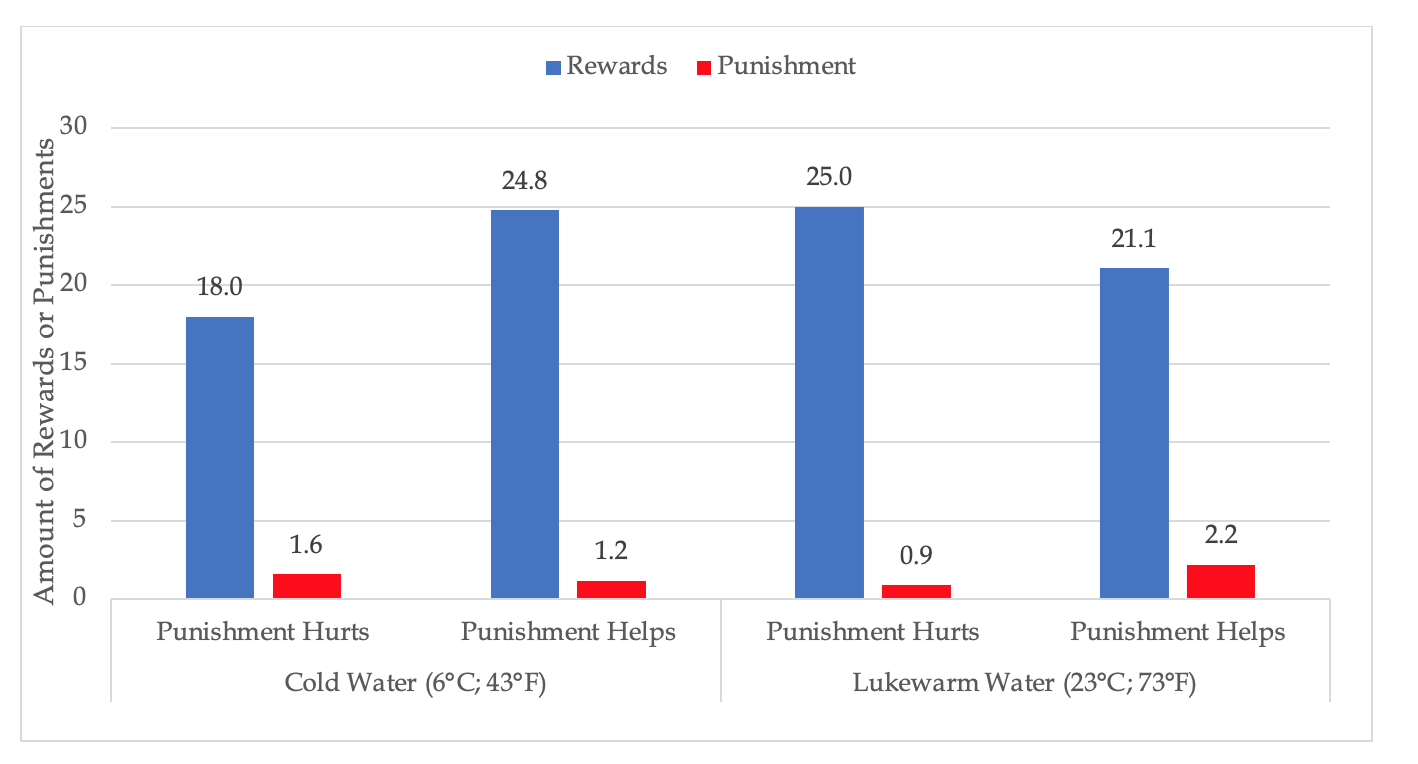 Figure 9 shows the findings.  Significant differences were not found in the amount of punishments given across conditions.  In general, participants provided few punishments to the female confederate.  Significant differences were found for the amount of rewards.  In the lukewarm water condition, participants who were told the punishment would hurt responded by giving a larger amount of rewards than participants in the lukewarm water-punishment helps condition.  The finding switches for the cold-water participants.  Participants in the cold-water condition provided FEWER REWARDS when they were told the punishment would HARM the confederate versus when they were told the punishment would help.  What do these findings mean?  Participants who felt unpleasant because of the cold water exhibited more aggression as measured by providing a smaller number of rewards.  These findings partially support the CNA’s hypothesis that simple unpleasantness, even from cold water, increases anger and aggression.  Interestingly, participants in the cold water condition self-reported more anger, irritation, and unpleasantness than those in the lukewarm water condition.  But, these two groups did not differ on levels of self-reported sadness and distress.  This again supports Berkowitz’s thesis that general unpleasantness causes anger, not sadness.

Many things can determine whether the escape or aggression networks are stronger – including genetics, past learning experiences, and the situational cues of the eliciting event.  In general, Berkowitz believes that fear occurs when a threat is present, whereas anger results when we feel unpleasant but a clear a threat is not present. Rudimentary Anger and Rudimentary Fear mean that early in the emotion episode we have basic feelings of anger and fear.  At this point in the model, the only cognitive appraisal we have made is the perception of unpleasantness.  Thus, we cannot clearly label the emotion. As the emotion episode continues, we engage in more conscious, higher-level critical thinking.  Our cognitive appraisals, schemas, and interpretations now may impact and change our labeling of the emotion.  Berkowitz says we begin to “differentiate feelings,” meaning we determine whether we are experiencing anger, fear, or another emotion.  At the later point in this model, we may now identify our emotion as irritation OR annoyance OR anger OR fear OR another emotion.  Once we begin to differentiate feelings, we may consciously engage in emotion regulation strategies, such as suppressing our emotion, increasing the intensity of our emotion, or behaviorally expressing our emotion.  This model shows that as the emotional episode continues, our emotional experience changes as we obtain more information.