Research has begun to investigate how activation in the brain changes during the experience of negative self-conscious emotions.  A meta-analysis (Bastian et al., 2016)   on brain activation when eliciting shame, guilt, and embarrassment in the lab found the findings in Table 9.  The increases in activation are compared either to neutral conditions or conditions in which other negative emotions were elicited. While reviewing the table, think about whether these findings support the locationist or constructivist view of the brain.  For a review of these views, go here .

Note. The above findings are not exhaustive.

Orbitofrontal Cortex.  The orbitofrontal cortex (OFC) is a structure that we first covered in the anger chapter (for a review, click here).  Recent work (Beer, Keltner, and colleagues, 2003) suggests this structure is activated when we regulate social behavior and when we experience self-conscious emotions. One study found that damage to the OFC hinders people ability to regulate their behaviors and impacts their experience of self-conscious emotions.  In this study, participants with damage to the orbitofrontal cortex (vs. healthy controls) completed a variety of lab tasks with strangers.  During these tasks, the following findings were obtained:

Taken together, these findings highlight that the OFC functions to keep our behavior in line with social norms and expectations.  Further, when damaged, people’s behavior changes and subjective feelings do not align.  It may be that people’s inability to experience high levels of embarrassment may prevent them from realizing that their behavior is socially inappropriate.  Alternatively, people with OFC damage may have difficulty evaluating the self’s behaviors against society’s morals, thus resulting in no change in their self-reported embarrassment.

Self-Conscious Emotions and Theory of Mind.  Other research has investigated the relationship between self-conscious emotions and the brain structures that are activated by theory of mind.  Developmentally, people exhibit theory of mind (TOM ) when they can understand and predict the mental states of other people. TOM develops around age three years old .  For example, I utilize theory of mind when I develop my lectures for students – I have to predict the students’ mental states – what they already know and what they do not know.

In this study (Takahashi et al., 2004), baseline fMRI measures of healthy, Japanese participants were taken.  Then, while in the fMRI, participants read sentences that involved neutral, guilty, or embarrassing contexts.  These sentences were meant to elicit the emotion by encouraging the participant to image acting out the behavior. The independent variable conditions would be the baseline fMRI measures versus the sentence-reading fMRI measures.  The dependent variables represented activation in various brain structures.  Compared to neutral sentences, reading guilt and embarrassing sentences resulted in activation in the medial prefrontal cortex (MPFC), the superior temporal sulcus (STS), and the visual cortex (see Figure 14). Both the MPFC and STS structures are activated during theory of mind tasks.  Embarrassment (vs. guilt) showed greater activation in the temporal cortex, hippocampus, and visual cortex. These TOM areas may be activated because when we evaluate a violation we committed, we have to take the perspective of other people to determine how other people are evaluating our violation, and this perspective-taking causes the self-conscious emotion! 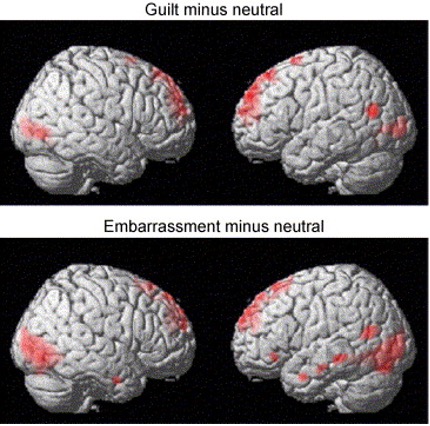 Approach-Withdrawal Hypothesis.
This study looks at the relationship between frontal asymmetry and guilt. For a review of frontal asymmetry, go here.
In this study (Amodio et al., 2007), all white female participants completed three phases in an experiment. Because this was a study on prejudice, all white female participants were recruited. Females were selected because they tend to experience more negative self-conscious emotions than men.

In Time 1, baseline measures of EEG frontal asymmetry were taken and participants reported their current emotions, including shame and guilt. Then, with the EEG cap still on, the white female participants viewed faces of White, Asian-American, and Black individuals. Then, participants viewed positive, negative, and neutral IAPS photos. Following these tasks, the participants were given bogus graphs showing their brain-wave responses to the face and photos. The purpose of these fake graphs was to elicit guilt in all the participants. To provide a cover to the story, participants were told that their brain responses to the IAPS photos were accurate – that when they viewed positive photos their brain responses were positive, etc. Then, they were told that their brain responses revealed patterns about their evaluations of the faces. Participants were informed that they had positive responses to White faces, moderately positive responses to Asian faces, and negative responses to Black faces. The bogus feedback about their brain responses to the faces was meant to trick participants into thinking that their brain waves indicated they exhibited prejudice toward Black individuals.
After showing the graphs, in Time 2, participants were asked to sit still for two minutes (with the cap still on!). Why? Because at this point we are assuming participants are feeling guilty – and we want to measure the activity in their frontal lobes. At the end of the two minutes, participants self-reported their emotions, including shame and guilt.
At Time 3, participants were given the option to engage in a repair behavior, an approach behavior that would be exhibited by participants feeling guilty. Participants were asked to rate the interest of 19 different articles and one of those articles was on reducing prejudice. Remember, they are rating the article while the EEG cap is still on!
We will discuss three groups of results. Figure 15 compares participants self-reported emotions at Time 1 (Baseline) to Time 2 (After receiving bogus feedback). These findings show that from baseline to receiving the feedback about their prejudice, participants reported an increase in most negative emotions, with guilt and shame showing the greatest increase over time. These findings confirm that participants did feel a negative self-conscious emotion after receiving the bogus feedback. Further findings showed that from Time 1 to Time 2 participants showed a reduction in left frontal lobe activity. This reduction is evidence of a decrease in approach motivation because activation of the left frontal lobe implies approach behaviors. Interestingly, as shown in Table 11, participants self-reported guilt at Time 2 was negatively correlated with activation in the left frontal lobe. This means that as people reported greater guilt intensity, they showed the greatest decrease in in left cortical activity. 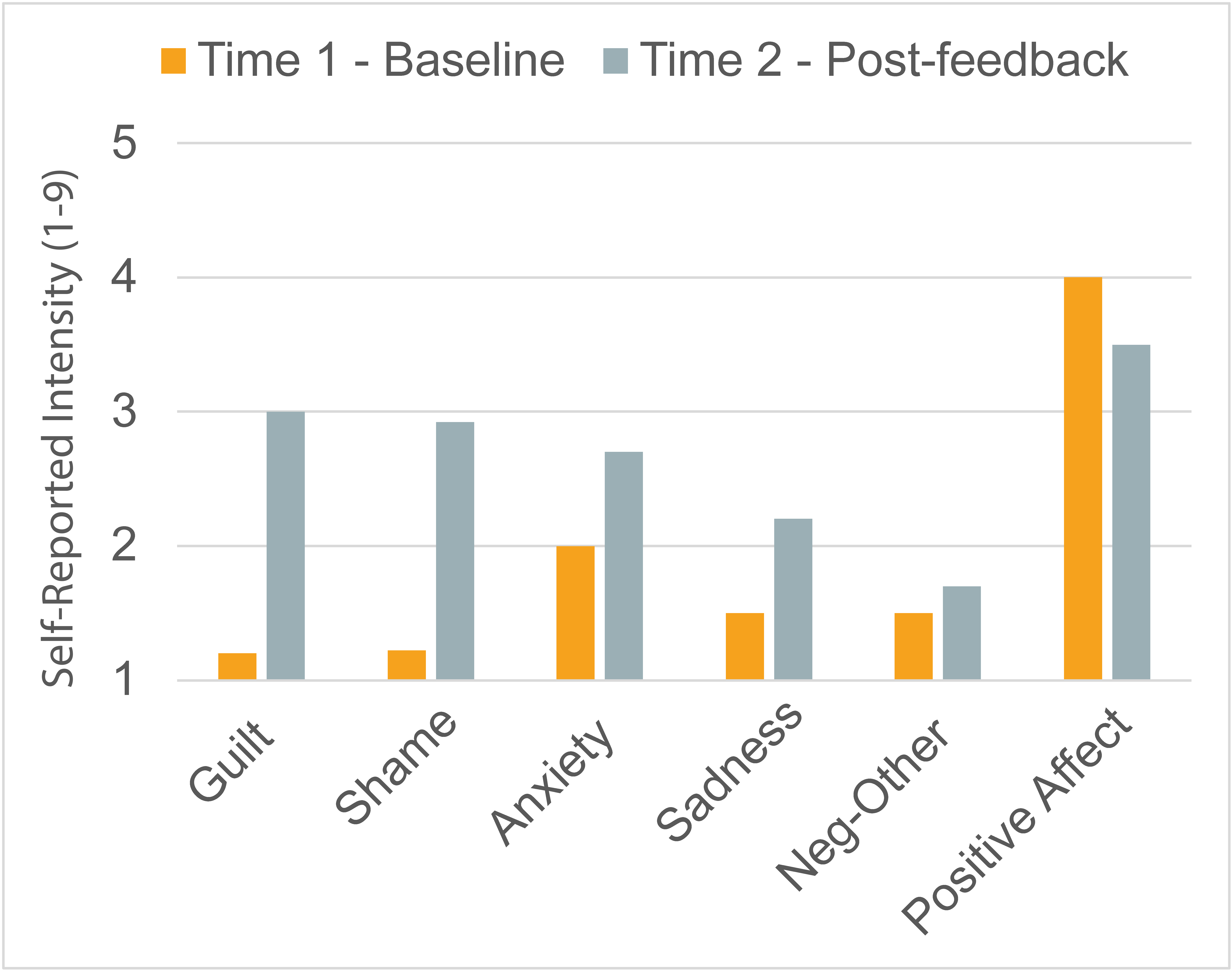 Next, researchers compared self-reported emotions in Time 2 to repair behavior at Time 3. Remember, participants exhibited repair behavior when they reported high levels of interest in the prejudice reduction article. Findings showed that self-reported guilt and interest in the prejudice reduction article were positively correlated. But, self-reported shame and interest in the prejudice reduction article were not correlated. These findings replicate prior research which has found that guilt causes approach/repair behavior, while shame does not.
Finally, Time 2 and Time 3 frontal asymmetry were compared. Activation in the left frontal lobe increased from time 2 when participants were given bonus feedback to time 3 when participants exhibited the repair/approach behavior. These findings suggest that the opportunity to approach and repair the behavior through the prejudice reduction article activated the left frontal lobe. Finally, results showed that more interest in the article was associated more activation in the left frontal lobe. So, the more motivated people were to approach and resolve their prejudice, the more they showed left frontal lobe activation! Overall, these findings provide further support that left/right frontal lobe activity measures approach/avoidance behaviors and not the valence of the emotion.
Summary of Distinct Emotions Perspective of Shame, Guilt, and Embarrassment

Research on the negative self-conscious emotions does demonstrate that these three emotions result in increases in unpleasantness and activation, although the amount differs among the three emotions. Current work suggests the SNS system is activated for these emotions, but more work should evaluate PNS changes. Work on cognitive appraisals suggests that the three emotions are caused by internal attributions and the perception that the self exhibited a behavior that violated a social mor moral code. The three emotions do show significant differences in behavior changes and vocal changes. But, we do not currently know whether these changes mean that the emotions are three distinct emotions or whether the three emotions simply represent different intensities of the same emotion. For instance, when reporting subjective feelings for shame people mention embarrassment and for embarrassment people mention shame. Further shame and embarrassment both result in avoidance of eye contact and even looking down. These similarities might suggest that embarrassment is the less intense form of the same emotion as shame. Finally, a major limitation to this research is that in some studies shame and guilt are considered the same emotion. Further many studies, especially on physiological changes, only test one of the self-conscious emotions, which makes comparisons more difficult.